“Disrupted” ist the autobiographical adventure of Dan Lyons, a journalist who lost his job at Newsweek as technology writer at age 52.

He finally decides trying to cash in on the start-up boom and gets hired by HubSpot, a Boston startup which creates some sort of cloud based online marketing software for small  and medium size businesses.

At age 52, he is actually double the age of the average HubSpot employee and soon experiences how it is to work in a start-up environment. Predictably, it is pretty chaotic, without any established structures or reporting lines. Instead there is free candy, free beer and all kind of crazy activities which are aimed at making the place a “fun place to work” for people right out of college.

According to the author  the software itself is little more than the expensive version of WordPress.com and most clients don’t even seem to use it that much. The “core” of the company is  a “Boiler Room” like call center where in “Wolf of Wallstreet” style, young aggressive, beer slugging college boys (all white of course) aggressively sell the Software over the phone. If they don’t make their quotas, they will be “graduated” which is the HubSpot version of “fired”. So despite selling a “new way of selling and marketing”, the company itself pretty much relies on what’s old and tested.

Predictably, the author doesn’t manage to fit in. Partly because the company and a large part of the management team clearly seems to be nuts, partly (and this is my interpretation) he is disappointed that he doesn’t enjoy the “celebrity status” he had as a relatively famous journalist. At least he makes it until the company goes public and manages to cash in his options.

Overall, I think it is a very well written and funny book and a must read for anyone who wants to see the more critical side of the current start-up cult.

I think there is also a good chance that this could become a “classic” as personally I do think we are in the last innings of the current Start-up hype cycle and this book maybe, looking back, will mark the peak of the madness.

I think for investors, the book is also interesting because it covers also the effect of corporate culture very well. In one of my last posts, I introduced AQ Group which was tremendously succesful despite being active in a very tough industry because (in my opinion) very strong “No nonsense” corporate culture.

At HubSpot, management also tries to force feed people a “Corporate Culture”. As an experiment, just look at the 128 pages Corporate Culture slide deck of Hubspot compared to the core values of AQ Group.

Maybe I am getting to old, too, but on a side by side comparison, I would rather work for AQ Group then to be “Hubspotty”. From an investor point of view I think it is very important to distinguish between a “grown Corporate Culture” that has developed based on what has worked and a “forced Corporate Culture” that gets stuffed into people because everyone these days knows you need to have one.

HubSpot itself holds up remarkably well. The company is still worth around 1,6 bn USD 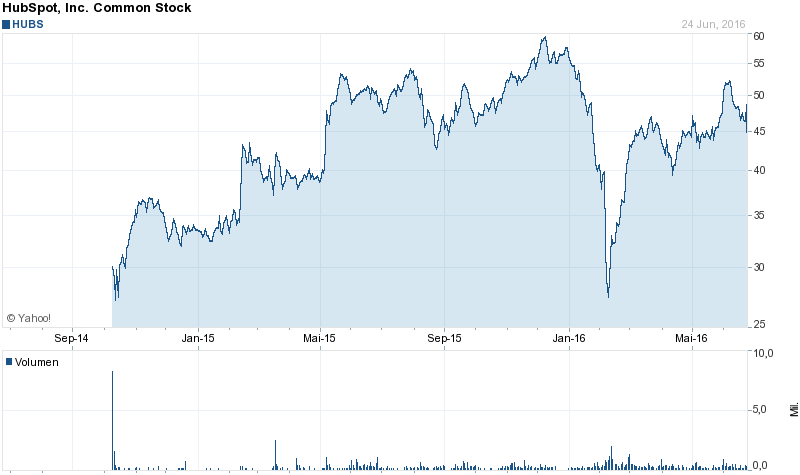 According to the last filing, HubSpot still grows but still makes losses. Funnily enough the Net loss per share was around 15% lower than in 2015 for the first quarter, the main effect being a 10% increase in shares outstanding over the last 12 months.

Would I short the shares ? I don’t think so. There might be companies out there who might be stupid enough to buy it because it is a “cloud” company (SAP ???). Long term, the business does not seem to have any kind of moat or significant network effects.

In general, I do think companies like Hubspot can get into trouble when their stock price is not rising anymore. Many employees trade a low salary vs. stock options. If the stock doesn’t go up, the good ones will either leave or demand more options. I think such companies will show the strange effect that their salary cost will go up significantly if the stock stops rising. This is an issue for all those companies, including Google and Amazon in my opinion.