Book review: “Lights Out: Pride, Delusion, and the Fall of General Electric” 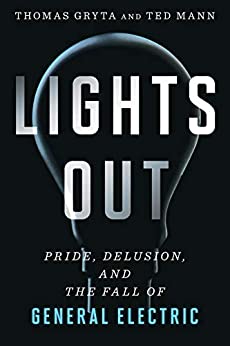 “Lights out” is a recently published book that covers the downfall of General Electric, which was in 2000 the world’s most valuable company with a market cap north of 500 bn USD and a proud history going back to Thomas Edison.

To the outside, the company led by “Neutron Jack” Welch looked unstoppable. With its famous management systems (Six Sigma and others) the company became a huge conglomerate, spanning business from their traditional light bulb and appliances business to turbines, financial, insurance and even TV and Movie studios. GE was most famous for continuous growth and an uninterrupted streak of quarterly profit increases until Jeffrey Immelt took over in 2001.

END_OF_DOCUMENT_TOKEN_TO_BE_REPLACED

How the COBOL programming language still rules in Financial Services

Long term readers know that I have covered the (online) travel industry intensively and that I actually have build up a “post pandemic travel basket” recently. Therefore, I was really excited to look at AirBnB’s S-1 going public filing.

Airbnb is one of the most prominent Unicorns of the last decade. The company was founded in 2007 and has since then become one of the really big names in online travel. It describes itself as having established a new category of travel called “home sharing” and that all the hosts on the platform as well as the clients are a big “community” that make travel “Human”.

However the big “elephant in the room” is the question: Why do they go public now after 13 years ? Why didn’t they go public earlier or wait a few more months once the travel recovery really kicks in ?

There was already a lot of press coverage already for Airbnb in the past weeks. I think in general one could distinguish between the Bull Case and the Bear Case:

One of the biggest cheerleaders of the Bull case is clearly Prof. Scott Galloway who wrote a big post some days ago, putting the value of AirBnB at 120 bn USD with the following statement:

END_OF_DOCUMENT_TOKEN_TO_BE_REPLACED

A  pitch for Slack as an investment

Wexboy with an epic post on Crypto Investment company KR1

And a good write up on Multi-Chem, a Singapore based IT distributor

Disclaimer: this is not investment research. PLEASE DO YOUR OWN RESEARCH !!!!

I really hesitated if I should keep this private but then decided against it. Believe it or not, I have again bought shares in Play Magnus. After initially buying the stock at around 16,90 NOK per share, I sold the shares at a loss at 14 NOK per share. Buying now again a 2% position at 17 NOK per share looks extremely stupid, but these are the reasons why I still did it:

END_OF_DOCUMENT_TOKEN_TO_BE_REPLACED

Good story  on how once unbeatable Intel has been fully “disrupted”

Disclaimer: This is not investment advice !!! PLEASE DO YOUR OWN RESEARCH.

At first a big “health warning”: My track record with Spin-offs is awful although I dedicated significant efforts into this area. Over the last years, I missed out on several good ones (Uniper, Trisura, Osram) and I unfortunately invested in a few bad ones (Cars.com, Metro). My best spin-off investment so far was Italgas.

Siemens itself is an interesting case, as under (soon to be former) CEO Joe Kaeser, and even before, they are one of the few German companies that use spin-offs more or less frequently. Over the years, Siemens has spun off for instance Quimonda (bankrupt), Infineon (has recovered quite well), Osram (taken over by AMS) and Siemens-Gamesa (very volatile but strong performance lately). Overall I would say that on average the Siemens Spin-offs did very well despite being mostly “ugly ducks” at the time of spinning off. Siemens Healthineers in comparison was not an ugly duck (despite the stupid name) and that’s why they actually IPOed it.

This is the latest spin-off from Siemens, spun-off on September 28th with a first price of around 22 EUR, a lot lower than initially expected. As we can see in the chart, the shares dropped at first but now recovered to the initial level in line with Siemens AG and the DAX:

END_OF_DOCUMENT_TOKEN_TO_BE_REPLACED

Just a few days ago we had a total different situation when I wrote my last panic journal entry:

Covid-19 infections went parabolic again, lock downs had already started, the US election was still in front of us, there was really bad weather and markets were in a suddenly very depressive mood.

As I am not a vaccine/Virus expert, I’ll link to a post on how to interpret the results and try to summarize them:

END_OF_DOCUMENT_TOKEN_TO_BE_REPLACED

Quants had a really shitty year so far

Prof. Damodaran with a recap of the “covid-19 stock market”

Some interesting facts about the pulled Ant Financial IPO

A really interesting question: Which stock market is the most zombified one ?

At first some good (or bad) news: By going through the German stock markets once again, I detected that my initial list was already outdated and that I missed quite some new IPOs and listings, so there will be (at least) one more post with German shares after this one before I then can wrap up the series into a condensed watch list.

This time, the 25 (to a certain extent) randomly selected (and US election free) stocks resulted in seven stocks that might be in principal worth watching and/or follow up.

L-Konzept is a 2.7 mn EUR market cap real estate company that has little business and small but consistent losses. “pass”.

Krones, a 1.7 bn market cap company is often considered one of the typical “hidden champions”, being the world leader in manufacturing bottling machinery for the beverage industry. With Covid-19, the whole beverage industry is clearly negatively effected which in turn might make business more difficult for Krones. However if we look at the stock chart, we can see that the stock already peaked in 2018: