Book review: “Lights Out: Pride, Delusion, and the Fall of General Electric”

“Lights out” is a recently published book that covers the downfall of General Electric, which was in 2000 the world’s most valuable company with a market cap north of 500 bn USD and a proud history going back to Thomas Edison.

To the outside, the company led by “Neutron Jack” Welch looked unstoppable. With its famous management systems (Six Sigma and others) the company became a huge conglomerate, spanning business from their traditional light bulb and appliances business to turbines, financial, insurance and even TV and Movie studios. GE was most famous for continuous growth and an uninterrupted streak of quarterly profit increases until Jeffrey Immelt took over in 2001.

However this relentless pursuit to increase profits had already created the basis for the later downfall: The profits in 2001 were driven by over 50% by the mostly unregulated finance business which acted mostly like an unregulated hedge fund and juiced up quarterly numbers with quarter end transactions that generated the required profits.

After the GFC, Immelt tried to refocus GE on its Industrial roots but he made a lot of strategic mistakes (late entry into Oil & Gas, Alstom purchase etc.) and didn’t really clean up the mess from the Jack Welch area.

At some point, many of the shenanigans in GE’s balance sheet came out, such as double digit bn legacy losses in the already sold insurance businesses and other stuff.

The book is a very good reminder that even the greatest companies in the world can unravel very quickly if things go wrong. In GE’s case, the seeds for the downfall have been planted long ago. The book contains some interesting details how GE juiced up earnings in the industrial business, an area where I thought this is much more difficult than in financial services but obviously isn’t.

In GE’s case, also the hybris of the leadership played a big role. One nice detail for instance was the fact that Jeff Immelt always flew with two company jets to have a replacement in case anything would delay him with the one he was actually sitting in. According to the book, especially in the later years of his reign, Immelt was much more focused on creating a story than in actually managing the company. One example was for instance filling a huge building with thousands of coders IT specialists to “digitalise” the company but not actually having a plan how to do it.

Interestingly, investors were well aware of GE’s profit smoothing for a long time but were more than happy to accept it as long as profits only went up. So a certain share of responsibility should clearly be assigned to complacent investors and analysts.

Overall I think it is a very good read and a very good reminder that especially with big companies it is very hard to see from the outside how good these companies are actually performing as long they have momentum. So who know which company will be the “next GE”. Maybe Amazon, Google or Apple ?

Another lesson is that once the doiwnfall starts, it can go down a very long way and betting on the rebound is very difficult. Despite the recent bounce back, the stock chart looks really really ugly: 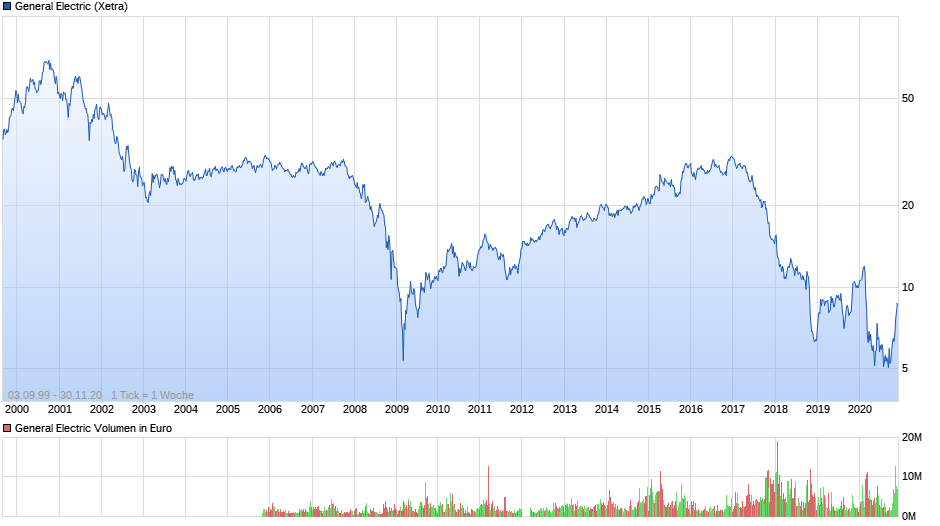 The only minor criticism form my side: The author Ted Mann is a WSJ journalist who covered GE over the years. On the plus side, this contributes to many interesting details, on the minus side, the book sometimes reads as a collection of newspaper articles with a lot of repetition. I guess the author has “recycled” some of his articles, which is Ok but sometimes makes the story line less clear.

Nevertheless I can recommend this book highly. For me it is at least equally important to learn about failed companies than just reading success stories.