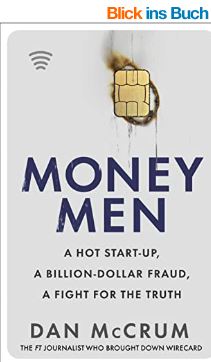 The Wirecard scandal has resulted in a couple of books already, most of them quite good. But the ultimate book is of course the one from FT reporter/investigator Dan McCrum who dedicated more or less 7 years of his career to this and significantly contributed to the ultimate revelation of this “House of Cards”.

As a journalist, McCrum knows how to write and in contrast to some other books from journalists, this actually reads like a book and not a series of articles.

There are a couple of highlights, for instance the “on site” visit with the auditors to verify Philippine Bank accounts, the trips of McCrum and other FT colleagues to check out subsidiaries of Wirecard and the deal where Marsalek and Co bough an Indian company for 30 mn EUR and sold that 4 weeks later for over 300 mn EUR to Wirecard.

Overall, I can highly recommend the book, even if one has read others about Wirecard already.