Disclaimer: This is not an investment advice. The author will most likely own the stock already and sell it without telling anyone as well….

As the post is rather long, a short Elevator pitch:

– TGS Nopec is a potential “outsider” style oil services company with a distinctive and capital efficient business model
– currently cheap because of cyclical issues, negative sentiment for the oil and natural resources and top line decline yoy
– underlying business much less sensitive to oils price than the market believes and yoy top line decline is due to “outsider” behaviour

TGS Nopec, A Norwegian/US based Oil service company is a stock which was mentioned to me by a good friend and very good investor already several times over the last 2 years. Up until now, I didn’t really had the motivation to dig into it as I do not know much about oil companies in general.

Then a couple of events happened which increased my interest:

– I discovered a bug in my database which increased their Boss Score dramatically from very bad to very good
– the (very good) moatology blog wrote about Pulse seismic, a somewhat similar company
– Warren Buffet disclosed a stake in Exxon some days ago
– The Brooklyn Investor had a good post about Exxon as an “outsider company” with great capital allocation
– the oil / oil services sector is one of the few cheap sectors left

TGS Nopecs business model is not really easy to understand. Thankfully, they explain it very good in their annual reports. Here are some passages from the 1998 annual report (the year where Norwegian Nopec and US-based TGS formed the current company):

TGS-NOPEC is a leading global provider of multi-client seismic data and associated products to the oil and gas industry. Oil companies use this seismic data to explore for and develop oil and gas deposits. TGS-NOPEC specialises in the planning, acquisition, processing, interpretation, and marketing of non-exclusive surveys worldwide.

Seismic data is the only rigorous way to physically map sub-surface geology in order to determine where to drill for oil and gas. Oil companies can obtain seismic data either by hiring a seismic contractor and paying the full cost and profit to the contractor, or by purchasing a license to use multi-client data already acquired by a contractor.

And then they make a bold claim:

Given careful planning and risk management the multi-client model allows earning multiples much higher than the seismic contract model.

So let’s quickly check this bold plain. For this, let’s look at TGS ROE and ROIC over the last 15 years:

The results look impressive. On average 26% ROE with a variation between +15% and 36%. As comparison, I have used CGG SA, a French seismic oil services company which also makes survey but produces (and owns) the equipment and is doing more contract work.

TGS Nopec themselves show those charts regularly in their investor presentation:

So this is clearly something to dig into deeper.

Some thoughts about valuation:

Enterprise value is maybe a little bit too low, as TGS clearly needs some of the cash to fund future projects, but a single digit P/E for a company with an average ROE of 25% looks like a joke compared with other valuations these days. I would assume, that TGS Nopec should be quite high on any “Magic Formula” list as well , with a EBIT/V yield of ~14% and ROICs in the high 20ties

My Boss model indicates at least a fair value of twice the current price, realistically for such a good company, a P/E of 15 should be achievable if there is not any structural problem.

Why is the company cheap and what do I know better ?

The biggest issue is clearly the cyclical nature of the oil business in general and the current state of the cycle as well. Additionally, many big oil companies are spending more on on-shore shale exploration than off-shore.

The Macondo/BP incident clearly has shown that off shore oil drilling has its risks. So overall spending for off-shore drilling will be clearly under pressure for some time.

On top of that, the whole global warming discussion clearly takes its toll as well. Some weeks ago, a group of big funds actively challenged “Big Oils” investment into fossil fuel. This is a topic which is clearly not going away easily.

So we do clearly have some structural headwinds for Big Oil and oil service companies from this side. Consensus among analysts therefore is rather muted, after a series of downgrades, only 4 of 21 analysts on Bloomberg have a buy rating, 12 are neutral and 5 recommend sell. This puts TGS among the Stoxx 600 constituents with regard to analyst ratings on rank 520 of 600 companies.

On the other hand, we will not all drive around in Tesla S anytime soon. As long as we see such cars in the current line ups, we will need to discover much more Oil:

As we have seen many times, even if at some point in the future for instance electrical cars will be the new standard this will take a really long time and usually much longer than anyone expects.

Company specific, TGS Nopec has lowered the guidance for 2013 sales 2 times. From an initial goal of 1 bn USD sales in 2013, estmates are no ~850 mn USD. We will see later that this could be actually a prove for the “outsider” character of the company, but clearly, for any “normal” analyst, a -22% yoy reduction in sales will not lead to a buy rating.

I clearly do not have any inside or better information than anyone else. On the other hand, for me, the combination of an “out of favour” sector combined with an “above average” or even “Outsider” company at a cheap price indicates a much better return/risk relationship than for instance a bet on a turnaround of a crappy German utility company.

Interestingly enough, the historical correlation of TGS share price with the Oil price is a lot lower than for other oil and oil services companies. This is a correlation matrix for the last 5 years (weekly basis):

So surprisingly, the correlation from the TGS stock price with the oil price is even LOWER than for the overall stock market. Although TGS is more correlated to the two peers CGG and PGS, the overall correlation of TGS vs. oil is really low.

The explanation for this could be that TGS might actually be a beneficiary of tighter budgets and lower oil prices. As multi-client seismic data is a lot cheaper than exclusive data, in relative terms TGS might take business from the “exclusive” market when times are tough.

So no, I don’t have an edge here, but I still think that this is an above average opportunity. Clearly, one has to have the stomach for some underperformance as the trend is currently not TGS best friend….

In the headline, I made the claim that TGS Nopec could be an “outsider” company, similar to those featured in the book “The Outsiders“.

Well, at first, the business model is quite uncommon. A seismic data exploration company which doesn’t own the equipment and doesn’t do contract work is pretty unique. This unique business model create a rather unusual balance sheet as well. Where you would normally find equipment, vessels and stuff, we only find a “data library” as the biggest asset plus cash and receivables.

This asset light business model potentially enables them to allocate capital better than the competition. If prices are unfavourable, they can cut back more easily because the don’t have a lot of fixed cost. If business is good, they rent some more boats. Equipped vessels seem to be relatively easy to hire.

Think of Google maps: It doesn’t really matter if Google rents or owns the cars and the 3D cameras, the important part is the data and what you do with it. Do we have any proof of this ? Let’s look at two charts I took from their investor presentations (which are by the way very good):

This is overall seismic spending over the last years: 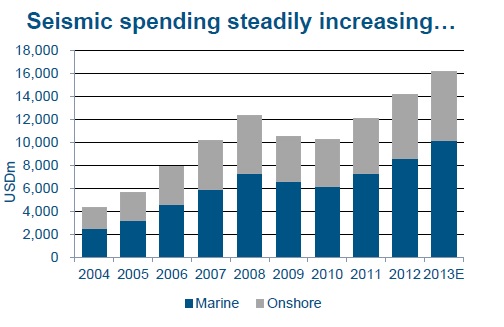 And these are TGS Nopec’s investments over the past 5 years:

This is very interesting. In 2010 for instance, when off-shore activity declined overall, TGS Nopec more than doubled their investments. This chart clearly shows that they do not just follow the market but make their own decisions when and at what price they are doing new projects. Due to their flexible cost base they can much easier afford to do so than their competitors. It reminds me a little bit how good (re)insurance companies are doing their underwriting. Sacrifcing top line for profitability is something which is quite unusual but very important for long-term success.

Owning the data which results in the existing library also is part of the moat of the company. A newcomer needs to invest a very large amount of money (and time) if he wants to recreate a similar data base.

TGS tries to dig a wider moat by investing in data processing and interpretation as well as acquiring complimentary data services like well log data and permanent reservoir monitoring which offers additional information for the oil companies. They also relatively early invested into data processing and interpretation seems to be one of the key value drivers in the business.

So in my opinion, TGS very much looks like an “Outsider company” with at least some kind of moat.

Interestingly, at least one other company, Spectrum ASA tries to copy their business model. According to the 2009 IPO prospectus, the company is basically a kind of “seismic data spin-off” from a more traditional seismic data company which owned all the equipment. Interestingly, the former TGS Nopec CFO works for them now, so their investor presentations look almost identical.

It is also interesting to look at presentations from “traditional” seismic companies like Polarcus or PGS.

A lot of nice pictures with ships, but on the other hand the numbers speak for themselves…..

TGS does not have a majority or dominating shareholders. Among the investors, Sprucegrove with 5% and Royce with 0.7% could be called “famous” value investors. Interestingly, around 17% are held via BoNy and State Street, where the ultimate owner is not disclosed.

How does TGS compare with Pulse Seismic ?

I have mentioned the great post at Moatology in the beginning. With Pulse seismic, the issue is the following: I think they are in a “”sweet spot” at the moment, because a lot of their old seismic library can be sold again due to the Shale boom. Nevertheless, on a longer term “Going concern” basis, I think TGS is the better company and off shore seismic is also the better business model. TGS has by the way become a direct competitor to Pulse by acquiring Arcis, a smaller Canadian “on shore” seismic company in 2012. All in all, long-term, I think TGS Nopec is the “safer” and more diversified bet, althogh clealry Pulse Seismic might be an attractive target for some of the bigger players.

Historically, TGS could grow much mre than Pulse which clearly shows in the stock price over the past years:

Despite the negative momentum, I think TGS Nopec is a highly attractive potential “Outsider” company. It is also an interesting diversifier and natural hedge for my portfolio as I own some companies which suffer directly from higher oil prices (e.g. MIKO).

In order to keep some dry powder for increases, I will start with a “half” position, which means 2.5% of the portfolios at 155 NOK per share.