After starting to look into Emerging Market companies, I thought it might be a good idea to beef up my library with some books on that topic.

Mark Mobius, the author of the book is one of the most well-known EM investors of all time (although he looks a little bit like the bad guy from a James Bond movie): 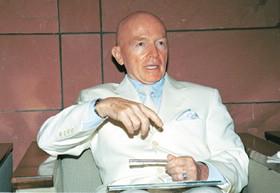 Nevertheless, I bought the “Little book” as they are usually compact and easy to read.

The book starts with the general investment principles of Mobius, which are clearly derived from value investing “Graham-style” following his mentor John Templeton. He stresses low valuations, especially with regard to tangible book and wants companies to pay out dividends.

Similar to Howard Marks he deeply believes in the cyclicality of markets.

Within the book there are several stories about specific markets such as Czech Republic, Kazakhstan, China, Thailand and Russia, but most of this are anecdotes, entertaining but not very instructive. He mentions some specific investments (Siam Cement, China Telecom) but overall he remains mre on the general level.

My highlight quote from the book is the following:

“If you see the light at the and of the tunnel, it might be already too late to invest”.

Other good quotes are:

“When everything else is dying to get in, get out. When everyone else is screaming to get out, get in”.

“When everyone else is getting all pessimistic, that’s usually when it is tim to turn optimistic”

“The first country to get hit , and hit hard, is typically the first one to recover”

Overall I liked the book as it is easy to read, although it doesn’t offer a lot of “depth” which, on the other hand, is not the goal of the “little book” series.

Maybe it is a kind of “confirmation bias” from my side, but somehow the book confirmed my view that it is now a good time to dig deeper into Emerging Markets.

Interestingly, the last 5 years or so the fund looks like a simple MSCI EM tracker fund (minus fees):

I have to verify this but in fund management, legends are often overrated…….