Some of my readers might remember that I looked at Delta Lloyd a long time ago as it was one of David Einhorn’s top pick back then, but we didn’t like it back then.

A quick look at the chart shows, that the problems I had identified were indeed there and the stock never really recovered:

Early 2016, Delta Lloyd executed a rights issue which they had to downsize due to massive protests especially form one shareholder. Einhorn sold most of his stock in September 2015, netting himself a significant loss on the position.

Then, a couple of days ago, my former holding NN Group offered 5,30 EUR per share for Delta Lloyd but after a few days Delta Lloyd rejected. Interestingly they did not reject the offer in principle but argued for a (significant) higher price.

My take on the situation is as follows:

Valuation wise, I would use 3 cases with the following probabilities:

At a price of 5,20 EUR (on Friday), this gives us an expected return of ~8,8%. Even at 5,30, the expected return would still be 6,8%. I think this is quite attractive, especially as I assume that the downside risk is clearly not zero but really small in this case.

This does not include the “option” that maybe some kind of bidding war could start and provide an ever higher price. I would assume within 12 months we know how this will be turn out.

So for the portfolio, I bought a 2% position on Friday. I was lucky enough to get it at 5,19 EUR per share.

Some lessons from the Aixtron case

I think I handled the Aixtron special situation case not well. I bought the stock with relatively little research at ~5,50 EUR, hoping that the 6 EUR bid of a Chinese investor would go through.

However, a few days before expiry I got nervous and sold the stock at a loss (5,34 EUR) as only a relatively small amount of stocks had been registered in favor of the offer.

If we look at the chart, this was exactly at the lowest point within the last 4 weeks: 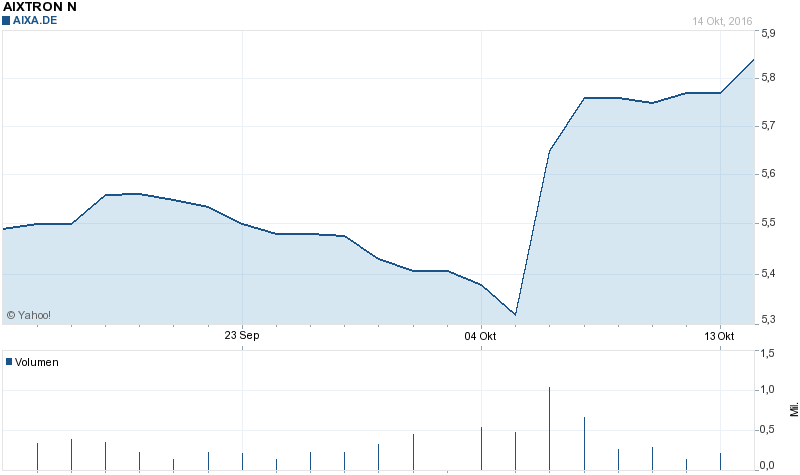 What happened? The very next day after I sold the shares, the Chinese investor first extended the offer period for another 2 weeks and lowered the threshold to 50,1%.

Then, a day later, they informed the investors that at the end of the initial period, 47% of the investors had handed in their share, and Friday last week they had 60%.

I think I made at least 3 mistakes:

For future cases I hope a can avoid those mistakes.

With regard to the Delta Lloyd case above, I think despite the short post, I have done enough research, as I analysed and followed both stocks for quite some time and owned NN for 2 years plus. But let’s wait, see and hopefully be patient enough.