Book review: “A Blueprint for Better Banking: Svenska Handelsbanken and a proven model for post-crash banking “ 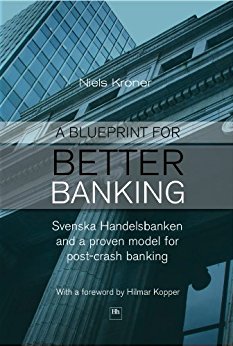 The author of the book is Nils Kröner, a German who among others worked as consultant at McKinsey, at Barclays and for AKO capital before he became professor.

The book has been written following the big financial crisis and starts with a review about what went wrong in general.

Then he introduces the “7 deadly sins of banking” that contributed in his opinion to the banking crisis which are:

“Normal” banks commit those sins all the time because it increases profits in good times with the cost of catastrophic losses in times of crisis. The author also mentions that with the  current standards of reporting it is very hard to see from the outside if and to what extent a bank is committing those sins.

He then moves on to explain how Handelsbanken avoided almost all of those “sins” due to their specific culture.

The decentralization of Handelsbanken started in earnest in 1970 when Jan Wallander became CEO.The first stress test was the Swedish banking crisis in the early 90ties. Handelsbanken didn’t avoid all the problems but did a lot better than the competitors.

The decentralization has some specifics that help to explain Handelsbanken’s resilience:

Overall it becomes clear that the very specific culture of Handelsbanken is a result of many decades of incremental improvements and therefore not so easy to copy.

“A Blueprint for Better Banking: Svenska Handelsbanken and a proven model for post-crash banking ”  is an expensive book (the Kindle version is 30 EUR or so) but in my opinion it is worth the price.