I have had some posts on Bitcoin and Crypto currencies on the blog before. Overall I find the technology very interesting, but at least for Bitcoin I am not certain about the real value.

Things are though very different for a German company called “The Naga Group”. The company IPOed 5 months ago on July 10th in Germany in the lightly regulated “Scale segment”. Initially, its aim was to specialize in “disruptive Trading technologies”.

The disruptive technology is an App which is the “Tinder of Stock trading”. The product is a “social trading business platform” called Swipestox, trying to earn most of its money with advertising. I have looked up the App on the Google play store and it has been downloaded a 100.000 times which is OK, but not great. Interestingly the newest comment/rating is from beginning of September, so I am not sure how actively this App is used.

The company boasts 2 prominent pre IPO  investors: Hauck and Aufhäuser, a well-known German private bank and Fosun, the conglomerate from China whose founder went “missing” some months ago, but then  reappeared , Oh, and Fosun actually bought Hauck and Aufhäuser last year.

In the first 6 months of 2017, the company had around 4 mn EUR in Revenues and roughly the same amount of losses and virtually no cash on hand despite significant amounts raised from Fosun.

The IPO price was 2,60 EUR per share for 1 mn shares sold,  Looking at the stock price, calling it volatile would be an understatement: 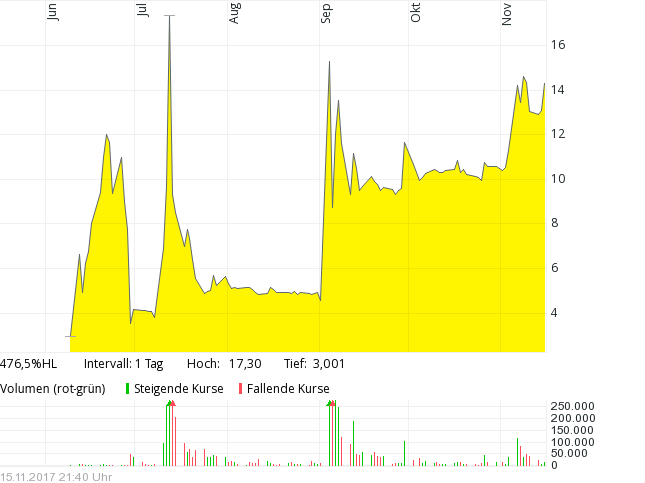 The first major spike in the stock price happened in July, when Naga released that they will create the “Naga Wallet” which will allow users to participate in Bitcoin, Ethereum and ICOs. Interestingly, also the Swipestox app claims to offer Cryptocurrencies but who cares ?

After spiking briefly, the stock price went down again and hibernated around 4 EUR when then in September Naga Group announced their own token sale, which surprisingly is called the “Nagacoin”:

In the course of the development of the NAGA Wallet (see Ad- Hoc Notification dated
18 July 2017) customers of The Naga Group AG as well as other interested parties
shall be enabled to buy a cryptocurrency – the Naga Coin, briefly NGC – by virtue of
an Initial Token Sale (“ITS”). The NGC shall be used by the buyers – inter alia – for
transactions on the existing and future trading platforms of the Naga group, namely
the platforms SwipeStox and SWITEX.

This pushed up the stock price again to around 15 EUR/share (~300 mn EUR market cap). Now, after a few months the ICO sale is starting in a few days. There is the usual Whitepaper, a more easily to digest 3 pager,  a funky video and even a “financial model”.

The whitepaper mentions another project of Naga which is Cybo, a “crowd/artificial intelligence Robo Crypto Advisor”.

A pretty funny aspect of this ICO is that although they want to create a “Naga Wallet” to dominate crypto currencies, the recommend to open a free existing “myether wallet” in order to be able to receive the Naga Coins.

Even more funny is the main selling point of the Naga ICO: 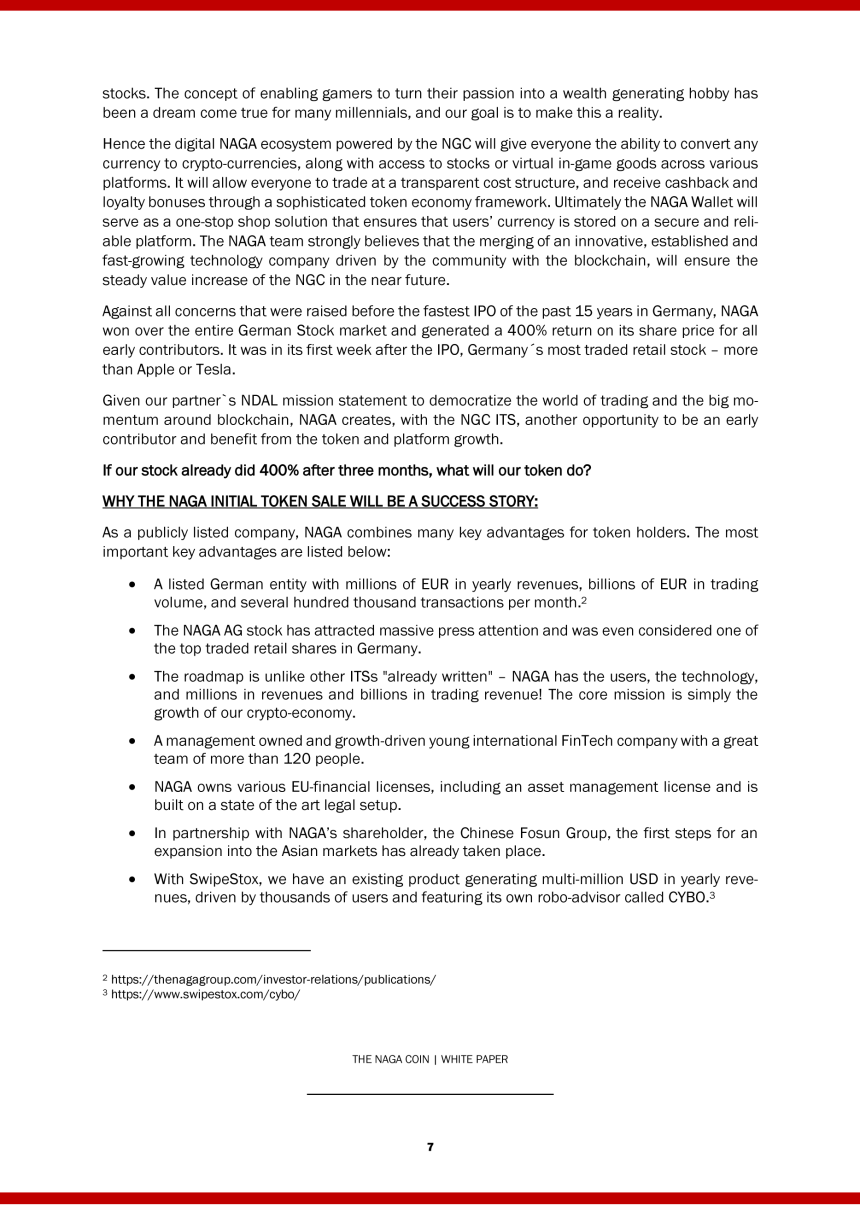 I mean this is a convincing argument, right ? A successful IPO with 400% plus for shareholders really guarantees success for the ICO ? But wait a minute, didn’t the stock price go up because the announced an ICO ? And now the ICO is a guaranteed a success because the stock price went up ?

To make things more easy to understand, the financial model includes a price chart for Nagacoin: 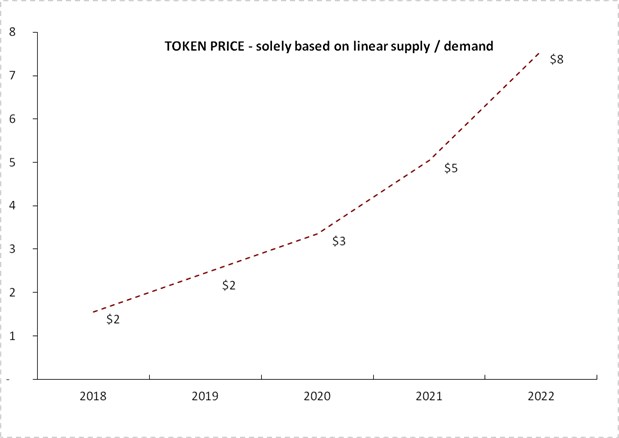 With the stock being up 400% in 5 months, an 800% increase in the value of the Nagacoin seems to be on the very conservative side. Compare this to a recent spam comment I got on the blog:

Hello everyone, my name is Jones Franklin.I have invested with a bitcoin company that gives a 10% return every week, that is when you invest $1000 you get a return of $100 every week for life.I decided to share incase you are willing to invest on something.I will recommend the company to you.They are good and it has turned out to be the best investment i have made so far.You may wonder why i am sharing this with you.This is because of the commissions i get when i refer someone to them

What I also find quite fair is the fact that management only receives 17,5% of all ICO proceeds, 10% of proceeds are reserved for an (employee) option pool and 12,5% for “legal and advisory”. Besides a further 5% “bounty pool” and a 10% “M&A reserve”, that leaves more than half of the money to be spent for the Naga business, that sounds like a pretty good deal.

And why would anyone buy those shitty coins ? A fat discount of course. Early “investors” get a 30% “discount” and even extra coins if they recommend this to friends.

I just found this sentence in the 6 month report:

The funds raised from the public will not be consolidated into NAGA’s balance sheet
. The NAGA token-sale does not create any shareholdings. It will be a pure unit of account and therefore represents an extension of NAGA’sproduct range.

So it seems that the full proceeds go to somewhere else. Interesting.

As I mentioned in a previous post, I bought my first stocks almost exactly 30 years ago. So I have seen a lot of excesses in the market, mainly in the late 90ies and then again before the great financial crisis.

“The Naga Group” at first looks like a typical 1990ies stock promotion: Announce to do something spectacular and then sell only a little bit of stock and pump up the price with further spectacular news (but little actual achievements).

However the ICO aspect adds another tool to the stock promoters: With a successful IPO, they can actually create “value” for the company because any ICO proceeds are basically “free money” for the company. Other than debt, it doesn’t have to be paid back and other than issuing new shares it doesn’t dilute the promoters.

As in this case, promoters can take a direct cut of the proceeds and then profit again if their stock goes up. So for them it is a nice “double dip” and in total what I would call a “double pump”.

What I find interesting is the fact that issuing and actively promoting these coins in Germany is legal. Everything around investing, funds etc. is extremely regulated, but scamming “investors” with an ICO seems to be perfectly OK.  I also find it interesting that Hauck and Aufhäuser as traditional private bank is involved in such activities. Maybe the Chinese owners think something like this is quite normal ?

The only question remaining is why we don’t see more companies doing this “double pump”. It seems a very simple and straight forward way to make lots of money with little effort for the promoters.

It will be interesting to see if and how many coins they are selling and how long this “double pumping” scheme will work. As an investor of course the only option is to stay as far away as possible from this. Plus, the names of the management and main advisors should go on one’s own “black list” of people where you want to stay away from, wherever they will appear later after this thing has imploded.