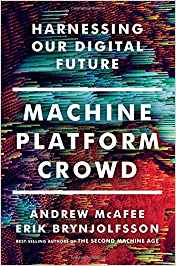 “Machine, Platform Crowd” tries to summarize what in the author’s view are the currently most important changes that will impact both, individuals and companies going forward:They call it the “Triple Revolution” consisting of:

In the first part they look at the emergence of what is often called “big data”  and “Machine Learning”. They argue that we are still in the early phase of this development but that progress is made with accelerating speed. Together with similar developments in  robotics and 3D printing, this could have widespread implications. They compare the current stage to the “Cambrian Explosion” where a lot of different new forms are born but where it is still not clear where this actually will end.

The second part of the book deals with Digital Platforms and how many of these platforms (Air BnB, Uber, Apple App Store etc) were taking over markets in surprisingly short time period from traditional “product” companies (i.e. Nokia etc.). Many of those platforms succeed by “unbundling” products and then combine it in new ways (Netflix, Spotify etc.). User interfaces are essential for succesful platforms and many of these platforms are “two-sided”, meaning that you have two distinctive different groups using the platforms (for instance at Uber: taxi drivers and guests). Online-to-Offline (O2O) platforms are often more difficult to scale than purely digital ones as the physical side of the platform often cannot grow in the same speed as the digital one.

The final part deals with what they call the “Emergence of the crowd”.  The internet allowed the creation of self organized organizations like Linux or Wikipedia to have a real impact in areas that were previously dominated by corporations. They also look into how Bitcoin and Blockchain work. Their opinion is that there won’t be a fully autonomously run organizations as there will always be the problem of incomplete contracts and residual rights on assets. This means that you cannot foresee everything what will happen in the future and that you will need some sort of authority to decide what happens if unexpected scenarios unfold.

I found “Machine, Platform, Crowd” a very interesting and important book. It brings together current developments which in combination could really change everything we know about work, business and society profoundly and within a relatively short period of time.

Clearly one can discuss some of their conclusions, but I think no one will be able to claim that one should just ignore all this because in some areas the impact is just too obvious.

For me this book is a “must read” for every fundamentally oriented investor.

For me there are two major learnings in this book: