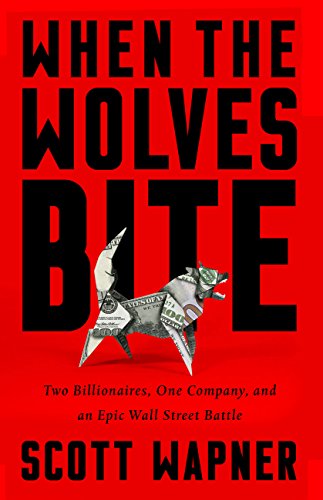 “When the wolves bite” is the story about  Herbalife and the fight between Bill Ackman, the Activist Hedge Fund manager who publicly shorted the company and Acitivist legend Carl Icahn who became a large shareholder mainly in order to annoy Bill Ackman.

The book is written by the CNBC journalist and TV host Scott Wapner who, among other things, hosted the live call on Television when Carl Icahn and Bill Ackman accused each other to be idiots live on TV for more than 20 minutes. I had written about this “slugfest” more than 5 years ago and to be honest, my conclusion was very wrong back then:

Personally, I think that Loeb and Icahn are only in for the quick rebound and long-term Ackman will most likely come out with a nice profit, but I wouldn’t really bet on this, as you might be killed (or squeezed) in the meantime.

In the book, the background for both main actors is well documented. Bill Ackman’s meteoric rise to become one of the top activist Hedge Fund managers and Carl Icahn with his decade long history of doing shrewd deals.

Ackman and Icahn had a first conflict about a single digit million amount of USD when Ackman had to wind down his first fund Gotham Partners and sold a stock to Icahn and agreed with Icahn on  a contract they called “Schmuck Insurance” which contained the clause that Ackman could participate in the upside if Icahn would sell within short time.

Icahn then did exactly this but not in an outright sale, which he thought gave him the right not to pay Ackman. Ackman however sued and won. This seemed to have been the start of the grudge between the two and laid the foundation for this epic battle later on.

The book also shows in detail some other blunders Ackman had during this time, most notably his misplaced bet in Valeant. There is also a lot of information on Herbalife and other players that were involved such as Dan Loeb, David Einhorn and even John Hempton from Bronte.

It clearly shows that the capital market is not always a rational market and that in such situations, egos play a big role. My advice back then that normal investors should stay out of this is still valid, unless one enjoys poker games without being actually at the table.

Although I don’t like Ackman myself (too much ego), I think the author portrays him maybe a little bit too negative especially compared to Carl Icahn. For instance the author details how Ackman had to wind down his first fund in 2003 without mentioning the overall situation in the stock markets back then.

Icahn in contrast in portrayed mostly as the brilliant investor, although investors who bought into Icahn Holdings in 2006/2007 are still down 50% and how Icahn for instance treated his son by closing out his son’s Netflix position against his will.

What’s not in the book:

Ackman actually did exit the Herbalife investment in February this year with a big loss. And just 2 days ago Carl Icahn announced that he sold 25% of his stake in Herbalife at a profit. The final verdict is still out as Icahn still owns a huge stake in Herbalife but so far it looks like a big victory for Icahn.