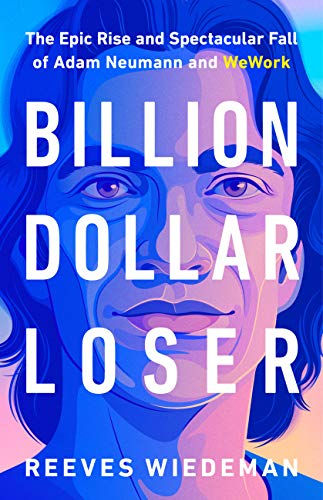 As my long term readers know, I love books about failed companies and WeWork is clearly one of the most spectacular failures in the recent times.

The book focuses initially mostly on the founder Adam Neumann, who grew up in Israel and didn’t achieve much there before going to the US. There he started a first business trying to sell baby clothing which was not too successful. He then met his co-founder Miguel McKelvey in the elevator of the building where both were working. Co-founder Miguel was intrigued by the fact that Neumann used to walk around barefoot and talked to everyone.

Neumann bluffed his way to get a floor of an empty building renovated and together with Miguel he opened “green Desk” as his fist shared office space in 2008. Green Desk became popular for the funny atmosphere and a lot of booze during happy hours. In 2009 they cashed out of the building with half a million dollar each. With that starting capital, the two decided to start over and this time as “WeWork”.

Without having a single location, they scored a 15mn USD  angel round at a 45 mn USD post money valuation. The new partner, a New York real estate developer introduced them around. In 2009 there were many vacant buildings so it didn’t take them long to get their first big deal, with Neumann doing the talking and Mc Kelvey executing. Again, they managed to create a very compelling offering for free lancers and young companies.

From the very beginning, especially Neumann showed huge ambitionx and kept telling everyone that this would be a 100 bn company and would change the world as we know it.

Through his wife (a cousin of Gwyneth Paltrow) he also got early access to the Ney York high society including Jared Kushner and Ivanka Trump. With these connections, Neumann managed to grow the company fast and got a lot of investors at ever rising valuations on board. The first step was a series A round at 100 mn USD pre from Benchmark. a series B came together at 440 mn USD, rising over a short time to a 10 billion series E. Part of Neumann’s pitch was that the company had a unlimited “TAM” including all offices in the world as well as living (WeLive) and schooling (WeLearn).

Internally, the most relevant positions were mostly filled from early personal friends and family, among others his wife who at some point claimed  to be a co-founder.

Things really then got out of control when Neumann met Masa Son, the CEO of Softbank and maybe the only guy who was even crazier than he was. After a 12 minute meeting in the back of a Maybach, Son agreed to invest 4 bn USD into WeWork which even before had been burning money like crazy.

One of the tricks that Neumann was able to pull off was to present WeWork as a “tech company” whereas 99% of its business was real estate and the 1% tech didn’t even work well. Part of the 4 bn USD package was a 361mn secondary sale from Neumann, who had sold significant amounts already in earlier rounds.

With Softbank’s money, WeWork went into “Blitzscaling” mode, opening offices at a rapid pace around the world. Problems however came up when WeWork burned through these 4 bn (plus some) in less than 2 years and they needed more money.

Initially, Softabnk proposed to double down but especially Softbank’s investors from Saudi Arabia and the Emirates didn’t like the investment that much which left WeWork with “only” a proposed 2 bn investment and a desperately needed IPO to raise more cash. To avoid Uber’s fate of a lukewarm IPO, Neumann decided that they needed to grow even more in order to get a high valuation.

Then during the preparation of the IPO documents it became pretty clear that an IPO with the set-up of WeWork would not work. Then, after having released the S-1 it became more and more clear that stock market investors would look very differently at WeWork and would not accept “Community adjusted BEITDA”. Pretty soon, the whole IPO was pulled and Neumann was finally kicked out of WeWork (with at least 700 mn USD in his pockets).

What are the learnings of this story ?

Clearly not every crazy guy with a “Reality distortion field” will become the next Steve Jobs or Elon Musk. Many of these types are falling down much earlier than Neumann and only very few make it as far as Jobs.

However, you can get pretty far with bluffing your way to some growth. Neumann made at least 700 mn USD, however as the story of the Zappo’s founder shows, money doesn’t guarantee happiness.

What I also found interesting is that as long as such a company is growing, no one cares how the actual economics of the business are.

Finally, I found it interesting that similar to General Electric, Neuman desperately tried to become “Tech company” or a “SaaS business model” as this sticker seems to do the magic trick of allowing valuations totally independent of profits etc.

Overall, I found it an interesting book. Maybe not the best book about failed Unicorns (Bad Blood was even better), but a very important reminder that not everything that grows strongly and calls itself a Tech/SaaS company is worth billions or even trillions.

These days there is little to read about Neumann. He seems to invest some money into real estate related start-ups but doesn’t seem to have started a new company (yet).