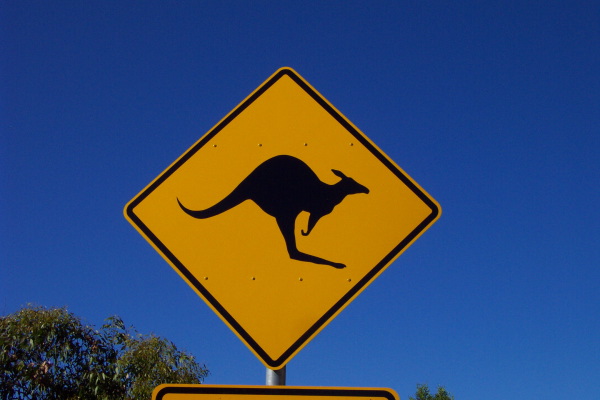 Up until now, I only looked at one single Australian stock: Australian Vintage two years ago. I didn’t like it mainly because I thought the interests between Management and shareholders were not aligned. Interestingly the stock jumped in the last weeks after doing nothing for 2 years.

This comparison tells us two things:

First, compared to GDP, the market cap of Australian companies is relatively high. Germany has roughly 3 times the GDP of Australia and France is still twice as large as measured by GDP. Additionally, there is a surpisingly large amount of companies listed, which for Anglo Saxon countries however is not such a surprise.

The ASX 200 index doesn’t look particulairly cheap with a trailing p/E of 24, although the dividend yield is close to 5%.

On the other hand, there are 149 stocks with a single digit P/E and an astonishing 589 stocks with a P/B of below 1. Clearly this is not a big surprise either. With mining and natural resources being in depression, a resource rich country like Autralie will have many companies exposed to this.

537 stocks do have a market cap of below 10 mn AUD, so micro caps are abundent dowen under.

The largest shares by market cap are the banks, Commonwealth Bank has a market cap of 131 bn, Westpac 109 bn, ANZ 75 bn and NAB 74 bn AUD. Especially CBA looks quite expensive at 2,1 times book but all banks are much more profitable than any Western peer with ROEs well in the 15% or so.

What’s quite interesting is the following: Including dividends, the ASX (in USD) is pretty much flat compared to its peak in 2008. If you would have bought the US S&P 500 instead, you would be up a healthy 72% instead: 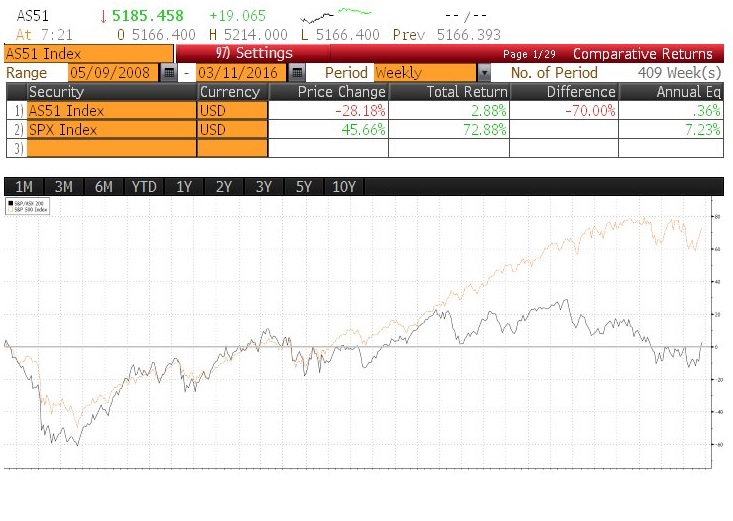 So this is almost a “lost decade” for Australian stocks. In my experience, when people start talking of a lost decade for stocks somewhere, this is often a good time to actually own stocks as the next decade is often a lot better although it might not look so.

What is very striking at first sight is the fact that Australian companies pay out a lot of dividends. Double-digit dividend yields are not rare. Yes, interest rates are higher in Australia (2,7% for 10 year Govies) but still, normally this would be a reason for big concern.

However there is an interesting specialty with regard to dividends in Australia: They want to avoid double taxation of corporate profits and therefore every Australian holder of Australian stocks receives so called “Franking credits” when an Australian company pays dividends.

Those Franking credits can be used either to offset taxable income or to even claim a refund from the tax authorities in case the investor’s tax rate is lower than the one of the company. In extreme cases, someone who has a tax rate of 0% will therefore participate 1:1 without any corporate tax.

Depending on the investors tax rate, paying out dividends in Australia can therefore be more efficient than retaining profits and explains the relatively high payout ratios of Australian companies.

Yes, Australia has many problems. A huge “hang over” from the resources boom for sure plus a veritable “housing bubble”. On top of that the Australian Dollar looks overvalued, so any investment in Australia is clearly exposed to FX risk.

Nevertheless, compared to other “problem countries”, Australia’s fundamentals still look relatively good: GDP is running at a healthy +3,0% growth rate, unemployment is at 5,8% and debt to GDP is around 35%. In Europe, any country would clearly love to have the “problems” of Australia. Even the perceived star performer Germany manages to grow the ecoenmoy by only 1,5% and has twice as much debt to GDP.

Why Australia and what I am looking for

When I did my first steps into Emerging Markets, I had to find out the hard way, that many of those markets are natural resource dependent (Russia, Brazil etc.) and, more important, corporate governance and general legal standards are very low. Sistema in Russia was the prime example: A very well run company but for some reason the owner got into troubles with Putin and lost his most valuable asset to a “friend” of Putin. So before looking into any of those markets, I think it makes sense to look into a market like Australia first. At least the corporate governance and legal system should be a lot better.

By coincidence, I bought the latest copy of Monocle, a travel/design/politics magazine that I like very much. The focus of that issue was Australia and the fact that according to their view, Australia has much more to offer than iron ore mining and LNG terminals.

The Monocle guys in my experience are often “ahead of the curve” in that regard, so I count that as a “sign” to at least look a little bit more into the Autrsalian stock market.

As I am not a Deep Value guy, I am not looking for asset plays far below book value. What worked for me in the past is more the following: “Good” and unspectacular companies which might have been “thrown under the bus” but do not have too much direct exposure to the problemativ sectors mining and housing. Preferably they have business models that I already encountered elsewhere and of course, reasonable valuations.

As always in such “contrarian” situations, the risk is high that I am too early and that I will make losses on the first few investments. Again, this is something I am prepared for from my previous adventures into the “PIIGS” and Emerging Markets. Also, there is clearly no rush to invest into Australian stocks. But I do have the hope that along the way I might discover some “Gold nuggets” among all the rubble.

Of course I am an outsider to Australia. Local investors will have an information advantage with regard to local markets, management etc. The advantage of an outsider however is that one can take things “in perspective”. Sometimes things look really bad from the inside but on a comparable basis much better then elsewhere.

I have already linked to the Forager fund blog. John Hempton from Bronte also sometimes writes about Australia in his fund letter, most recently he went short Australian banking related stocks.

There are a couple of stock forums like Aussie Stock Forum. If any readers can help me with good blogs, forums, please don’t hesitate to put them into the comments or send me an Email.

So stay tuned, I hope that I can look more deeply into at least a handful Australian stocks over the next months……