Provident Financial is a UK-based “financial service provider”. What makes Provident “special” is that the company is extremely profitable:

Among its shareholders there are many “famous” investors for instance Marathon AM, Neil Woodford and  Tweedy Brown.Stock analysts are quite bullish, according to Bloomberg 9 out of 12 have the company as “buy”, although the target price at 31,00 is only a few percent higher than the current price.

The stock has done pretty well over the last years, “the great financial crisis” had almost no impact on the share price: 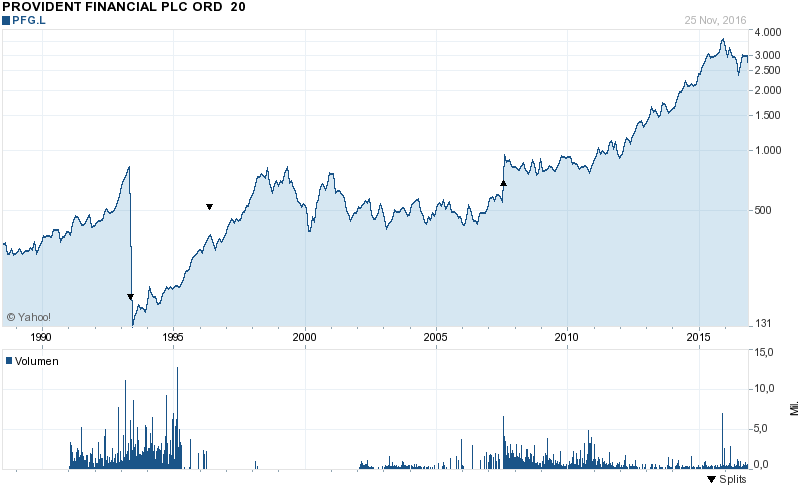 So what do they actually do and why are they so succesful ?

Provident is what one would call a “subprime lender”: they give loans to people who otherwise would not get loans anywhere.

For this service, they charge rates which in many other countries would not be allowed. This is what they state in their annual report as average annualized rates charged within their business lines:

Provident itself is what in the UK is a so-called “doorstep lender”. Agents actually bring the money in cash to their clients and collect weekly. Interestingly, the agents are paid for what they collect, not for the amounts of loans they extend.The biggest business however is now Vanquis Bank which is effectively a “subprime Credit Card” company.

As default rates seem to be not too high, this enables Provident to earn margins of around 20% despite relatively high cost and, with the relatively low asset based translates into high ROEs.

In Germany, such a business could not exist as “usury” is prohibited by law. The UK doesn’t have such laws, so companies like Provident are more or less free to charge as much as they want and can.

What bothers me about a “consumer subprime business” is that in my opinion, most clients would most likely be better of without such loans. A consumption loan rarely improves the longer term prospects of people and I guess many just don’t understand what they are actually doing.

If one googles Provident, there is no lack of discussion around this topic, for instance here:

To all those who do not like provident, just don’t use them. They offer a monetary service at high interest because they will lend to ANYBODY. Even previous customers who did not pay!! This is why it is high interest! And it is fixed interest not cumulative so what you owe is fixed and doesnt increase. Also no charges are made for missed payments unlike many bank loans. I would say having companies like provident is a blessing for many many people. If these companies did not exist the void left would be filled by illegal loan sharks – then many people would be in real real trouble dealing with cumulative interest, extra charges, threats and violence.

Regarding provident preying on the vulnerable, I personally do not take advantage of customers and am always straight and fair and honest with them. But yes, i agree provident as a company – and also some agents – do sometimes take advantage of vulnerable people but we live in a capitalist society and unfortunately this means vulnerable people will be taken advantage of if a company can get away with it. Its not nice but thats the truth. Big Banks and many other businesses will lie and cheat and pull the wool over your eyes to get a sale or a loan or persuade you their product is better than others just because, for example, a famous footballer pretends to like it. Are they not taking advantage of vulnerable people? In ultra capitalist britain, I think most commercial operations are looking to take advantage of you. My advice is to get clued up about these things so you will not get taken advantage of – maybe moneysavingexpert.com is a good place to sta

Other critical articles can be found here, here and here.

So the business is clearly not illegal in the UK but in my opinion at least questionable from an ethical standpoint. I know that Provident has been doing this for a long time and there seem to be even worse loan sharks in the UK, but in my opinion such businesses, which take systematically advantage of the customers  will face more headwinds in the future.

Silver Chef also provides loans at relatively high rates but to businesses which in my opinion is a big difference as it enables people to start a business and stand on their own feet. SilverChef also doesn’t require any personal guarantees.

Funnily enough, they have a CEO with the name “Peter Stuart Crook”, who in  my opinion looks like a great guy to be casted a loan shark in a Guy Ritchie gangster movie:

According to his Linkedin profile, he started as an accounted and then came via Barclaycard and became CEO in 2006.

In 2015, he paid himself a very decent 8,5 mn GBP salary. He owns 18 mn GBP in shares, which sounds like a lot but is effectively only 2 salaries. His move into credit cards was clearly very profitable for Provident as they “doorstep lending business” seems to be on decline as there is more and more regulatory pressure on the sector.

Provident has shown over many years that they can profitably run a subprime lending business in the UK which charges extremely high interest rates.

It has been a great investment for shareholders and the stock is owned by numerous “famous” investors and has made its CEO very wealthy.

However for me, despite I do like financial companies, I don’t want to invest into a company which in my opinion runs an ethical questionable business. Some might argue that Lloyds Banking is not much different but I think that there is still a big difference between a well run main street bank and an aggressive subprime lender.

I do belive that in the long run, a company which takes advantage of clients has a higher probability to get into troubles than one which actually benefits the customer.

Additionally, Provident has already a significant market share in the UK (20%) and the business will not translate well into other jurisdictions, so future growth might not be as good as past growth. Plus, the shares are not cheap.