Oaktree Capital is an US-based listed asset manager specializing in alternative assets and more specifically in “distressed” securities. Co-founder Howard Marks became quite famous and is one of the most intelligent people in the investment industry. I had reviewed his book 5 years ago and read everything he writes with great interest. 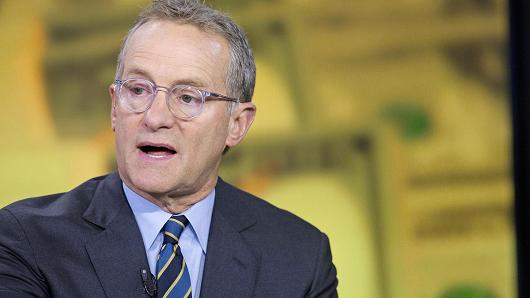 Oaktree is clearly one of the “Highest quality” names in Alternative Asset Management with a very good long-term track record. A reader mentioned Oaktree in the “ideal company post” and as I had them on my list anyway I decided to make this my first analysis for 2017.

Looking at the stock chart we can easily see that the stock has seen better days and trades now significantly  below the IPO price of USD 43 from 2012 when the company went public:

The company has a market cap: 5,8 bn USD. Due to its complex accounting (LP/GP structures, lumpy incentive fees etc.) GAAP Earnings are very volatile and not really representative of the underlying profitability. These were the GAAP EPS for the last 5 years (Bloomberg):

The driver of this volatility is the so-called “incentive fee”. For the classical “PE style” closed end funds, (around 33 bn of the 100 bn total AUM), Oaktree charges a percentage of the returns above a certain threshold. In most cases they charge a 20% profit share on top of a minimum return which usually is in the range of 6-8% p.a. Half of the profit share then goes as bonus to employees, the rest to the shareholders. To make things even more complicated, those fees have to be “accrued” first at fund level based on the actual performance and are only “earned” when money is actually paid out to investors. This makes those incentive fees highly volatile and usually, the time period when they are realized in GAAP is often several years later than when they were actually “created”.

This is how this looks for Oaktree based  on the numbers I compiled from the annual report:

We can easily see that the GAAP numbers are much smoother than the “real” numbers and over those 5 years GAAP looks a lot better than the true value creation. This is not  a surprise as Oaktree, as a distressed investor did create a lot of value after the financial crisis by snapping up distressed assets on the cheap. A lot of the performance within the fund then was already realized in 2009 and 2010 but then got distributed (and earned in GAAP) in the following years.

When assuming a “normalized” level of incentive earnings, I would use the underlying numbers and disregard the trailing GAAP numbers.

As always I start my analysis with reading the underlying documents, in this case the 2015 annual report  and then I try to compile a pro/con list adding stuff I know from elsewhere.

Something which they do not report very well but “sprang into my eye” is the fact that the “ordinary” part of the business, i.e. the normal fee income vs. the normal cost seems to be in pretty serious decline.

Asset management as such is quite easy business: You charge a fee and you have to pay salaries and cost. This is a table of P&L lines I compiled myself from the annual report which I think is relevant in looking at Asset Management business:

We can see that headline fee income increased a little bit over the past 5 years, but especially compensation increased much more, resulting in a significant drop  in the underlying profitability. We also see some fee pressure but overall this part still looks Ok.

This is from the annual report:

“The increasing number of investment managers dedicated to our markets and the increasing amount of capital available to them have made it more difficult to identify markets in which to invest, and this could lead to a decline in our returns on investments. “

A pretty clear statement. What we see at the moment is a bifurcation of the Asset Management industry: On one side, cheap ETFs (plus quant strategies) and on the other side Alternative Assets with higher fees. Everyone in between has to go one direction or the other. For many players, the Index/ETF world is not an option, so almost all “classical” Asset Managers try to push into alternatives. Cleary Oaktree has the advantage of the track record, but things will clearly get more tough. This will impact further fee levels and potential returns. Plus, I guess that part of the increase in compensation is a defensive move to keep key people in the group. Good for the star employees, less good for the shareholders.

I liked the way the Brooklyn Investor tried to value Oaktree,  a sum of parts valuation with 3 parts: The regular fees, the incentive fees and the NAV.,

This is how it looks based on “gut feeling” assumptions (12x EBIT multiple for normal fees, 6x EBIT for incentives, Doubleline at 1,5% of AUM, other NAV at book):

Under those assumptions, the stock looks fairly valued. Now one could of course discuss any of the assumptions (averages, multiples etc.) in order to move the value up or down. However my experience is that my first “gut feeling” approach often turns out to be pretty good.

So at this stage we can clearly see that although Oaktree is an interesting company, but they do have issues and the stock price does not indicate a significant undervaluation which I would need in this case. For me this is (again) a stock for the watch list which I would consider toi buy at a lower price, in this case at least below 30 USD per share (all other things equal).

For the time being, I will remain a loyal reader of Howard Marks’ comments but not invest into Oaktree. The good times seem to be over and the company is facing some operational issues. At a significantly cheaper price, the stock would be more interesting.