Universal Insurance is an US-based P&C Insurance company which has been on my extended watch list for some time now. Why ? Well, the company always traded cheap (single digit P/E), was very profitable (~31% ROE for the last 9 years on average) and growing strongly year by year (400% over 9 years). So from the outside this looked like a cheap but highly profitable growth stock.

The main reason why I didn’t analyze the stock further is that Universal is a specialized homeowner insurance company which almost exclusively operates in Florida.

The company has a market cap of currently ~620 mn USD.

Not surprisingly Universal now is in a tough spot as “Irma” is creating havoc on Florida as I write this post. The stock price has dropped by around -30% by Friday: 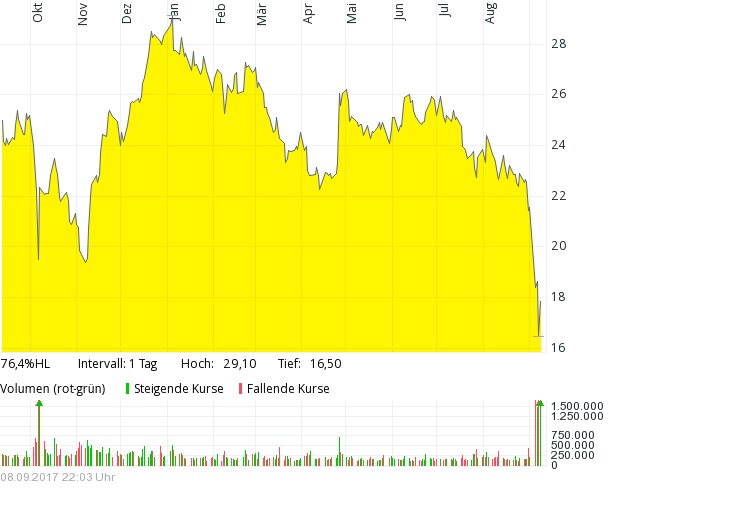 According to the latest 10K of Universal, the Insurance market in Florida is very special:

All residential insurance companies that write business in Florida, including us, are required to obtain a form of reinsurance through the Florida Hurricane
Catastrophe Fund (the “FHCF”), a state-sponsored entity that provides a layer of reinsurance protection at a price that is typically lower than what would otherwise
be available in the general market. The purpose of the FHCF is to protect and advance the state’s interest in maintaining insurance capacity in Florida by providing
reimbursements to insurers for a portion of their catastrophe hurricane losses. Currently, the FHCF provides $17 billion of capacity annually to its participating
insurers, which may be adjusted by statute from time to time

So it is quite interesting that only local players serve this market. Normally, local players should have no chance as the bigger players have much better diversification and should be able to offer the same policies cheaper, but for some reason (maybe because of the Government activities ?) this doesn’t seem to work here.
The Universal Reinsurance program
Due to the nature of its exposure, it is no surprise that Universal spends several pages on explaining their reinsurance program. I try to summarize this in my own words as good as I can:
– Universal has a net retention of only +35 mn USD for the first Cat event they encounter in a season in Florida plus 5 mn for all other states. The cover reaches until a total loss of around 2,5 bn for the first event
– they have additional protection for the next 3 storms as well, however net retention increases to 55 mn USD and the maximum coverage for those events is around 800 mn USD
All in all they seem pretty well protected even under adverse scenarios.

We have used the model results noted above to stress test the completeness of the program by simulating a recurrence of the 2004 calendar year, in which four large
catastrophic hurricanes made landfall in Florida. This season is considered to be the worst catastrophic year in Florida’s recorded history. Assuming the
reoccurrence of the 2004 calendar year events, including the same geographic path of each such hurricane, the modeled estimated net loss to us in 2016 with the
reinsurance coverage described herein, would be approximately $84 million (after tax, net of all reinsurance recoveries), the same as it would have been in 2015.

So losing 84 mn doesn’t sound too bad. But not so fast. at the end of the Reinsurance section we find this sentence:

The third-party reinsurance we purchase for UPCIC is therefore net of FHCF recovery. When our FHCF and third-party reinsurance coverages are taken together,
UPCIC has reinsurance coverage of up to $2,487 million for the first event, as illustrated by the graphic below. Should a catastrophic event occur, we would retain
$35 million pre-tax for each catastrophic event, and would also be responsible for any additional losses that exceed our top layer of coverage.

This last sentence is important: If the total loss is above 2,5 bn USD, they have to pay every single dollar themselves.
How large could a loss be ?
To get a feeling for what is at stake, one can check page 11. Universal has written coverage for a total of 135 bn USD in Florida alone. So the big question is. How much will be the final damage as the reinsurance program covers as we discussed only 2,5 bn Usd.
This seems to be very difficult to say, even for experts as this NYT article lines out.

There may yet be a Florida insurance market on Tuesday,” said Charles C. Watson Jr. of Enki Holdings L.L.C., who had been projecting losses of $172 billion on Sunday morning but just $49 billion by evening.

According to the 10k, Universal’s share of totally insured property in Florida is 5,5% (Page 9). Without knowing the exact distribution and just applying this percentage, Universal’s share of the losses could be between (5,5% *49) = 2,7 bn in the lower case and 9,5 bn in the upper one (assuming the estimate are only homeowner property losses).
I guess they would still survive the 2,7 bn hit but a 200 mn extra loss (pre tax) would wipe out close to 50% of their equity and might require them to raise capital.
However for me it is not clear what percentage in the above quoted damage is property damage or not. So the loss could also be a lot lower.
Interestingly they also quote Citizen’s projections for a large cat event:

Today, Citizens is about one-third its former size. With fewer policyholders, it estimated that it would get only $6.6 billion in claims in a 100-year storm.

Citizen’s has insured around 30% more in USD value than Universal and most likely also worse risks but still, it looks like that for Universal a loss above 2,5 bn is not totally unrealistic if Irma was really an extraordinary event.
Plus one should not forget that this is just the start of the Hurricane Season.
Other Florida only players:
There are two other Florida insurance plays: Heritage Property & Casualty Company and Federated National Holding Company. As the stock chart shows, all stocks have been hit equally hard in the last few days:

Without any deeper analysis I guess that those peers have the same issues than Universal.
So what to do now ?
Normally common wisdom in Insurance is to buy the stocks after a big Cat event happens. Usually, insurance market “harden” after such events and the higher premium then leads to nice profits going forward.
In order to make money from this as a shareholder, there is one big caveat: You have to survive.
And in my opinion this is currently the big issue with Universal and its peers: I am not 100% sure if they survive or at least need a significant capital infusion.
Insurers do have some instruments in these situations, such as booking claims slowly and play for time, but I am not sure if this works here when the damage is just too large.
A good example against buying after a big cat event is Thai Reinsurance, the dominating Thai reinsurance company after the disastrous flood in 2011. Prem Watsa’s Fairfax bought 25% of the company shortly after the cat event. Looking at the stock chart it is easy to say that Prem lost significant amounts of money with this purchase as the company never really recovered:

I don’t really know what happened there but these days capital is plenty and markets “harden” only for very short periods and might not offer the chance for the old players to earn it back.
This is also one of the big perils of Nat Cat insurance: These businesses can look very good for long periods of time but then get knocked out quickly if a larger than modelled event appears. It will be very interesting to see where in the Reinsurance industry these losses will ultimately pop up.
So from my perspective, I will watch this one closely, but only to learn and not necessarily to invest.