SIAS is an Italian motorway operator that I bought at the height of the “Euro crisis” in 2012 and sold 2 year later with a nice profit of more than 100% including a special dividend.

Looking at the long-term chart, selling in mid 2014 was not such a bad decision at least for the next 3 years (although in general my timing skills are clearly far below average): 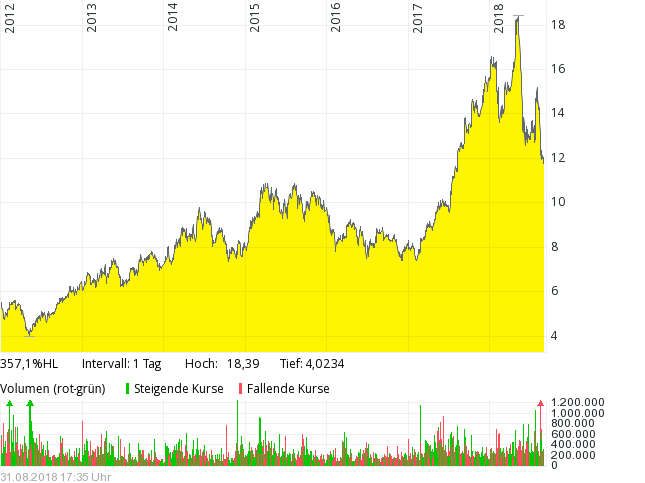 It took more than 3 years to surpass this level but then interestingly the stock more than doubled within a few months.

Looking at the aggregated numbers we can see an interesting pattern:

However looking a little bit deeper into the numbers of the 2017 annual report, we can see that some of the improvements were one-offs:

Interestingly also the 2018 numbers include a significant “one-off”, this time actually within the operating income. They released ~ 30 mn EUR provisions net in the first 6 months that had been set up in previous years. However, clearly top line improved nicely. Overall I would estimate that SIAS  could actually earn “adjusted” ~210-220 mn EUR in 2018 which would translate into 0,92 to 0,97 EUR/share or a

Although SIAS share price was already on the way down from its peak, the collapse of a freeway bridge in Genua (owned by Atlantia) did not only put Atlantia’s share price under pressure but also SIAS.

There was talk about a nationalization of the private toll roads in Italy after the incident which most likely caused the drop in the SIAS share.s As talk is often cheap in Italy,  and different ideas seem to emerge every day like tendering the concession on a Europe wide basis.

With a populist government one never knows what happens, but clearly any Non-Italian investor would be very carefull at the moment and most likely submit bids that would not make the Italian Government very happy.

However it is quite likely that the populist government will make much more difficult for the toll road operators. One likely scernario is that they will lower the allowed returns on investment, which in the long run clearly will not improve things but in the short run will please voters.

However, as governments in Italy change often, one could also think that maybe a lot of the negative news is already priced in and that in the long run everything will go back to normal or whatever is considered normal in Italy.

SIAS has clearly made improvemtns since I sold them 4 years ago, but a price of 18 EUR/share a few months ago was clearly not sustainable. It is really difficult to say if all the bad nes is priced in. At a current “normalizes” P/E of around 12, the stock looks cheap compared to similar assets but clearly operating profit could be hurt in the short to medium term.

So I think it makes sense to wait for some more bad news and then see if the share price goes to somewhere near 10 EUR which in my opinion then would be a clear buying opportunity.