New Work AG (former XING AG) is a very interesting company. The 1.3 bn market cap company is the German speaking version of LinkedIn. I used to be a (happy) member of XING until they began flooding me with tons of unwanted adverts. I still maintain an account there but since then have moved to LinkedIn. That’s maybe one of the reasons why the B2C side seems to be stagnating, but they compensate with increasing B2B revenues. They also run the German version of “Glasdoor” called kununu.

Although the high growth days are over, the company could grow revenues by ~15% and EBITDA margins are at a comfortable 32%. EPS also increased double digits (~12%) in 2019.

On the plus side, the company is financially stable (some net cash), on the negative side, they do capitalize quite a significant portion of their costs. Additionally, it will need to be seen how they can withstand LinkedIn which now belongs to Microsoft in the long term.

Looking at the stock price, we can see that Covid-19 has hit them hard, although the stock stagnated a little bit before:

For me the big question is how the crisis will effect their B2B business. The B2C business should to OK. Q1 was despite high sinlge digit top line growth already a little bit challenging. Valuation wise, they still trade at around 32x 2019 PE which is expensive. But the stock is clearly one to “watch”.

Schaltbau is a Munich based company that produces railway equipment with a markt cap of 224 mn EUR. A few months ago I would have said that rail is a sector with a lot of future prospects, but at the moment I am not so sure.

Schaltbau was close to bancruptcy in the early 00’s, recovered but is struggling for the 5 years or so which one can see in the chart: 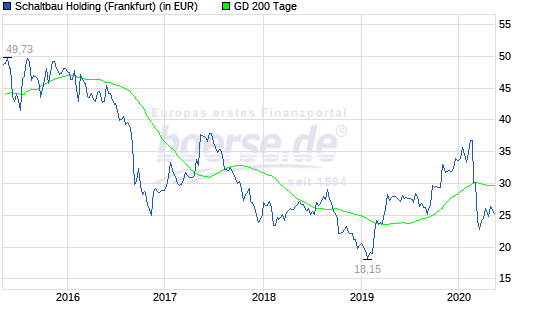 One very interesting aspect is that Active Ownership (Stada, Agfa) has a position in Schaltbau as well as a few other “active” investors such as Monolith NV.

According to the annual report, they have made program since 2016. Although sales stagnated, costs went down and profits went up. Q1 was difficult. However I do think that Schaltbau is worth to “watch”.

Bastei Luebbe is a small publishing company famous for its cheap “Groschenromane”. The company has a market cap of 28 mn EUR and went public in 2013.

The company had repeated issues with their accounts which for me a a reason to stay away and “pass”.

Stratec Biomedical is a 1.05 bn market cap company that at least to my knowledge is pretty much “flying under the radar” despite a nice long term growth path in the stock price: 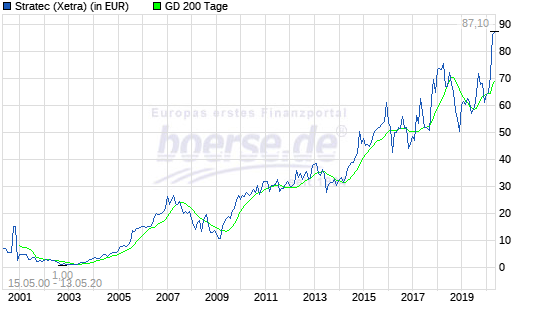 Another interesting aspect is that the company looks like a Covid-19 winner. Why is that ? Stratec is developing fully automated testing equipment for large players and with Covid-19, testing capacities need to be ramped up substantially.

The company had a super solid Q1 and revised the guidance upwards. It looks like that they will easily hit the 20% growth that they achieved last year. However the stock is clearly also very expensive at around 5x sales and something like 40-60x trailing earnings. Still, a very interesting company to “watch”.

CR is a 80 mn EUR Real Estate company with no observable “specifics”. “Pass”.

A 1.2 mn EUR nano cap with no observable operations “Pass”.

Greiffenberger is a 4 mn EUR market cap company that is struggling since a long time and has went through a couple of restructurings.  Not my type of situation, “pass”.

GK is a software company that is specialized in providing solutions for the retail industry. The 121 mn EUR market cap company looks cheap for a software company (valuation ~1,2x sales), but EBITDA margins of only 10% seem to indicate that the business is not so scalable. Growth in 2019 seem to have been OK, but 2020 wil clearly be very challenging. On the plus side, the founders still hold 50%+ and the balance sheet looks Ok with only a relatively small amount of net debt.

The stock price now is roughly where it was 14 years ago:

I would put the stock on “watch” but not with high priority.

Sto is a 600 mn EUR market cap company that produces insulation for buildings that I used to own in “Pre-blogging” times. 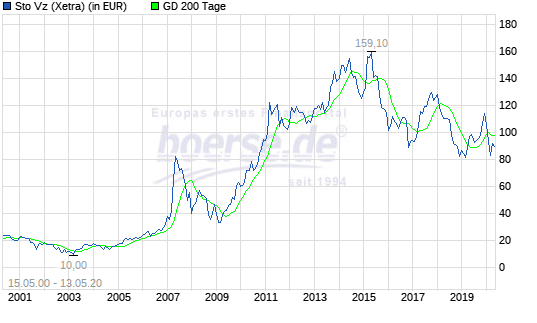 The company is majority owned by the founding family and only the non-voting preference shares are listed. The company had a great run for some time, maybe fired up by the increase in building activity in Germany but stagnated over the last few years. Despite top line growth, net income is lower than 5 years ago. The company looks cheap (PE of 10, at book) and has net cash but a growing pension liability of around 130 mn EUR. The company is a solid dividend payer but personally I do not see a long term upside despite the relatively cheap valuation. I t seems to be one of the companies that are always “cheap”. Therefore I’ll “pass”.

Kabel Deutschland is the 8.8 bn market leader in German Cable television, which has been taken over by Vodafone. The stock was subject to an “attack” by Elliott who wanted to negotiate a better price but in November 2019 he lost.

The company has been “Gifted” with a profit transfer agreement from Vodafone which extracts all profits and minority shareholders only are entitled to a guaranteed dividend of 3,71 EUR/shares gross. In the current environment this could be a decent alternative to fixed income but for me it is a “pass”.

Grammer is a “typical” automobile supplier (market cap  as its fate is depending on the health of the big OEMs with little pricing/negotiation power.

Therefore the stock is almost always cheap and hasn’t created that much sharehodler value over the last 10-15 years: 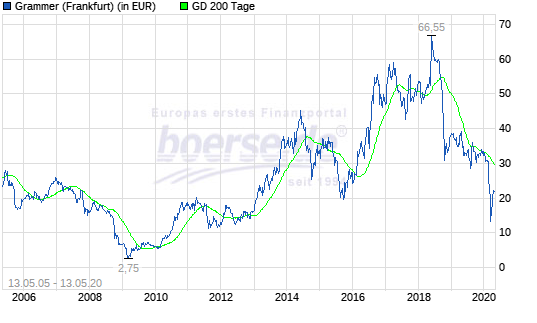 As the company specializes on interior components (seats) it might be less effected from a move towards EVs. The spike in 2018 was driven by a take over battle between a Chines company and the infamous Hastor family. whose business model seems to be to buy into automobile suppliers and then trying to squeeze the OEMs. The Chinese company now seems to own 84%. A reason to stay away and “pass”.

Regenbogen AG is a 16 mn EUR market cap company that runs camping facilities on Germany’s coasts. Not sure how this business will perform under Corona,, as it looks at the time of writing they should do somehow ok. However even 2019 was on a normal basis a pretty bad year and only a special income from an insurance claim seems to have created a profit. Therefore “pass”. 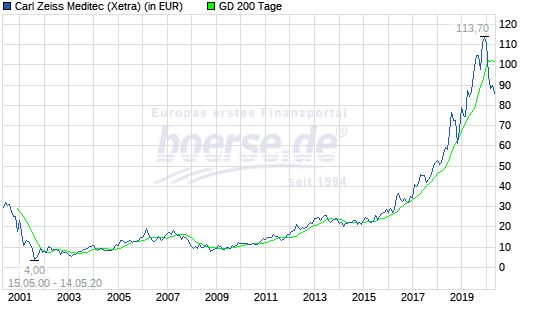 We can see in the chart that following the IPO in 2000, nothing happened for a long time before the stock took of like a rocket a few years ago.

Without a deep analysis it is interesting to see that EPS increased maybe 50% between 2012 and 2019, but the valuation tripled from a P/E of ~20 to 60 at year end. So this seems to have been a valuation story.

For me, the stock is outside my area of expertise and the valuation looks to rich, so “pass”.

A 1,3 mn EUR nanocap with losses and some real estate dealings. “pass”.

pferdewetten.de is a 43 mn EUR market cap online horse and sports betting service. Despite the total lack of current events to bet on, the stock price barely reacted to the COvid-19 crisis:

As I do not have a lot of knowledge in the sports betting business and I do not know how such a small player can survive in this business, I’ll “pass”.

Nemetschek is one of the few success stories from the wild “Neuer Markt” era. IPO’ed in 1999, the stock hibernated after the crash until 2014/2104 until it took off like a rocket: 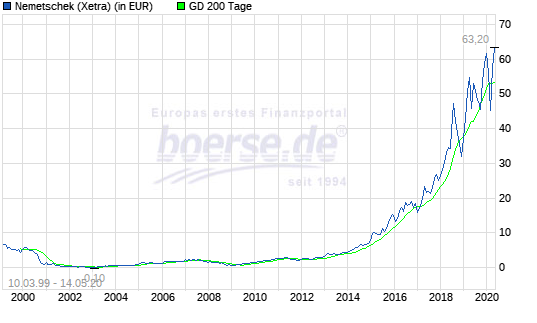 The company is a market leader in software for architects (CAD) and the construction industry. Compared to Carl Zeiss however, Nemetschek actually quadrupelt their earnings between 2015 and 2019, so the stock price increase is also driven by earnings growth. Still, with a PE of ~65, the company is far out of my comfort zone with regard to valuation, therefore “pass”.

Merck is a 13,5 bn EUR market cap company that in my view is also “Flying under the radar”. The company is active in specialty chemicals and pharmaceuticals. Merck KGaA and the US giant Merck used to be owned by the same family, but the US subsidiary was lost after WWI.

The company goes back to the year 1666 and is still majority owned by the heirs of the Merck family. The stock price has a nice long term uptrend but is stagnating since a few years:

The main areas of Merck KGaA are pharmaceuticals, life sciences and performance materials. Especially the pharmaceuticals division is stil enjoying double digit growth rates. >The company does have quite some debt due to acqusitions in the past. Merck guides to an “adjusted” PE of ~20 which is not that much, but to be honest I have very little idea how good the pharmaceutical pipeline is. Still I would put them on my “watch” list in order to learn more.

ADO is a 1.85 bn real estate company that seems to be only active in Berlin. The company has recently taken over smaller competitor Adler Real Estate. As I am not a fan of real estate stocks, I’ll “pass”.

Hornbach is a 613 mn market cap company that is one of Germany’s leading DIY chains. Hornbach was one of my initial portfolio stocks, but I sold it a few years ago. The problem with Hornbach is that the German home market is a brutal “red sea” and the once very profitable Easter European markets became more competitive.

The stock looks quite cheap these days (P/E of 9) but again, the issue is that I don’t see a great future as for most of traditional retail. “Pass”

msg life is a 85 mn EUR market cap stock which was “cold” delisted a few years ago when regulation in Germany changed. In principle, the business of software for the insurance industry could be interesting. However the company these days is traded only on the pink sheets. The company is still issuing reports but for me the whole situation back then was too “Murky” to be interested. “pass”.

Medios AG is a 534 mn market cap company that I had never heard of before. It is a pharmaceutical company that was listed in a very rare “reverse IPO” in 2017.

The company is growing aggressively (>50% in 2019). However the company seems to be rather a whole seller or distributor than a “true” pharmaceutical company as gross margins are super thin (5%). To be honest, I do not understand why this company trades at 45x earnings. On the plus side, the CEO seems to own ~40% of the shares.

Nevertheless a “pass” for me.

Eisen- und Hüttenwerke AG is a 176 mn EUR market cap stock that never crossed my radar before. Maybe the reason is that free float is small as 88% of the company is owned by ThyssenKrupp, the struggling steel giant.

To make things more complicated, the company seems to own no operating business on its own but two minority stakes in again majority owned ThysenKrupp companies.

Nothing motivates me to look at this in more detail, so “pass”.