And another 25 (almost) randomly selected stocks. This time 5 stocks were in my opinion worth “watching”. As it looks now, there will be only one more post in this series.

Innotec is an 88 mn EUR market cap supplier to the construction industry. The company had a nice run up, increasing more than 10x from its low in 2009 until early 2017 as we can see in the chart:

Since then, the stock price however went down. Sales are stagnating since 2015 and EBIT has been declining, although the EBIT margin is still double digits. The company has net cash and looks “dirt cheap”, but without growth that might not help much. The first 6M were pretty Ok despite in some of their markets (France, Italy) construction sites were closed. However as a really cheap and solid stock, I’ll put them onto the “watch” list.

Singulus, a 32 mn EUR market cap company, used to be a “High tech growth star” in the wild “neuer Markt” days, as we can see in the long term stock chart: 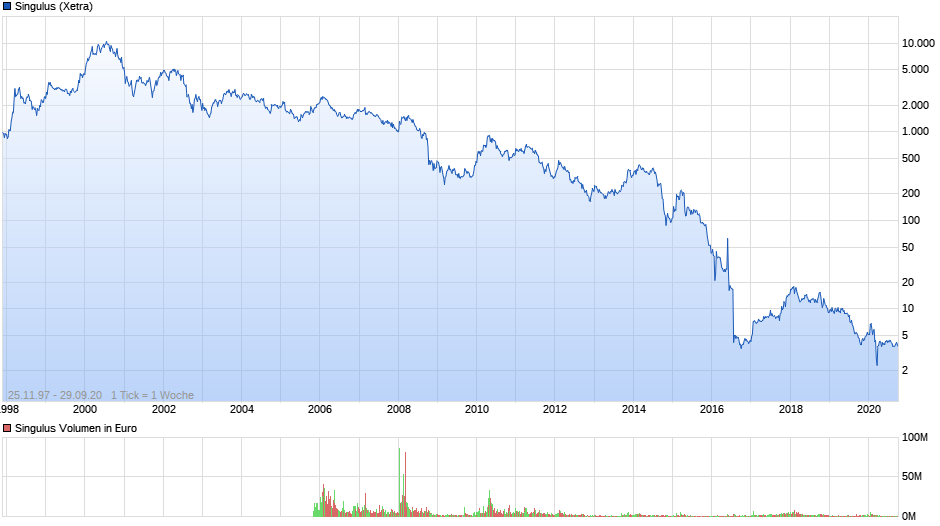 Not much is left. The company used to be a world leader in manufacturing machines that could produce CDs and DVDs, which however was a trend that got killed by streaming. They then tried to diversify into Solar which was too late. As already 2019 was a difficult year for them, the company will need to survive 2020. “pass”.

Cenit is a 109 mn ER market cap software/ IT consulting company that was IPOed into the dot.com market frenzy in 2000.the stock had its up and downs but never surpassed the initial value much:

Looking at the last annual report, one can see that they managed to increase top line by ~+40% from 2015 to 2019, but earnings per share actually declined slightly.

To my understanding, CENIT mainly is reselling software from French company Dassault systems in the Engineering space. CENIT’s first 6 Month do not indicated that they profit directly from Covid-19, so it is interesting to see that the stock recovered most of the drop already. Although the stock doesn’t look expensive, for me it is a “pass”.

The stock pretty much moved sideways (with some strong ups and downs) since its IPO in 1998. This is surprising as the underlying business (high tech machinery) seems to be quite volatile.

In the last few years, both, the company and the CEO/majority owner have been buying back stock on an ongoing basis. From the initial free float of 20% maybe only half is remaining and I guess it is only a matter of time until they are going to de-list. For me a “pass”.

AHT Syngas is an interesting nano cap company. Domiciled in Germany, the now 3.5 mn EUR market cap company went public in the Netherlands in 2016 at a price of 7 EUR per share. The price of the shares however fell quickly almost to zero when a subsidiary went into insolvency. They only recently recovered to around 1,80 EUR:

The company seems to plan and project installations that produce “synthetic gas” from bio mass. This is a potentially interesting technology with regard to Decarbonization, but the company is still tiny (~1mn in sales), but profitable. On the negative side, the reporting is very slim and the numbers are not really consistent from year to year. Nevertheless, I’ll put them on “watch”.

SBF AG is an 80 mn ER market cap company that I haven’t heard of before. The stock price has increased 10x in the last 2 years: 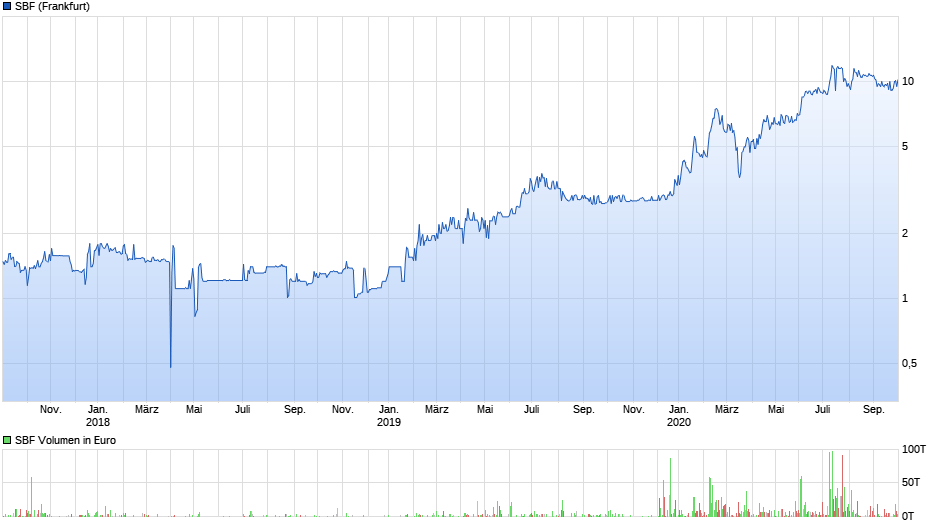 The company specializes in interior lighting solutions for trains and other public transport. It looks like that they have executed one of the rare successful turn-arounds, moving from a loss in 2016 to an almost 20% net margin in 2019.

The company has shown resilient 6M 2020 numbers, but is trading at 27x trailing 2019 earnings. Nevertheless a stock to “watch”.

A 16 mn market cap brewery with little or no financial information available. “Pass”.

init AG is a 311 mn EUR market cap company that specializes in IT solutions for public transport. The stock was hit hard by Covid, but looking at the chart it looks like that they would actually profit from Covid-19 which is hard to believe when one sees the empty subways:

The 6M numbers were OK, but didn’t show any acceleration in growth or profits. With a 30xPE based on 2019 profits, I think the stock is way too expensive, therefore “pass”.

Intercard is a 6,5 mn EUR market cap company that offers card based access and payments aolutions for instance for university canteens or similar uses.

2019 was one of their better years with some growth, but profitability is weak. Nothing that really interests me, “Pass”.

Behrens is a 3 mn EUR market cap company distributing equipment for fastening to the construction industry. The company was badly managed for some time and is struggling with too much debt. In early September, they announced that they will ask for Government help in order to repay the bond that is due by the end of the year.

In 2020, the company is (again) loss making and it is not that clear if they survive the maturity of the bond. “pass”.

Intershop was maybe “THE” star company of the Dot.com/Neue Markt Bubble in the late90s. Intershop was/is basically Shopify 0.1, a company that promised smaller businesses an easy way into E-Commerce.

Looking at the stock price, very little happened for a long time:

Why they never succeeded is not clear to me. 2018 and 2019, the company showed big losses as they claimed to transform from selling licenses to a “cloud” software model.

And indeed, the 6M 2020 numbers show increasing sales, especially in the cloud area and a small turnaround. However I do not know how sustainable this is. Nevertheless, a stock to “watch”.

United Internet owns a fiber network and runs a lot of successful services like GMX etc, however on the negative side, they are keen to build up an own 5G network which might be the reason for weakness plus problems with cooperation “Partner” O2. United Internet is not easy to understand, but I do think it is worth to “watch”.

Kuka, a 1.54 bn EUR market cap company is an interesting but also sad story: The company was once one of the most admired players in the field of robotics. After a biding war, Chinese investors took over the majority in 2016 which pushed the stock close to 200 EUR in 2017:

In the first 6M 2020, Kuka turned into a loss situation which is clearly also due to the difficult situation in the automobile industry. However, it reinforces my approach to stay away from companies with major Chinese influence, therefore “pass”.

InTiCa is a 27 mn EUR market cap electronic component manufacturer. The numbers look unimpressive, the company has significant net debt and the stock price has been going nowhere for 15 years. “Pass”.

Schwälbechen is a 56 mn EUR market cap dairy company, producing mostly yogurt and cheeses. I owned the stock in the past but sold it long time ago and was surprised how well the stock did over the last few years:

Personally I don’t fully understand this as already 2019 was difficult and their service business has cratered due to Covid-19. For some reason, the stock is still close to the ATH. “pass”.

Scherzer is a 64 mn ER market cap Holding company that invests primarily in special situations such as squeeze outs. It is always interesting to read their reports to check on new investments, however the long term track record looks only “OK” and the share price is significantly below the 2018 peak:

Óverall nothing I am really interested to invest in, therefore “pass”.

Jungheinrich is a traditional German manufacturer of forklifts valued at 3.5 bn EUR (including non-listed common shares). The business as such is cyclical which can be seen in the chart:

What I find really interesting is the fact that after Covid-19, the stock not only rebounded but is higher than it was pre-crisis and approaching ATHs. My first thought was: Maybe all the E-Commerce players are ordering forklifts like crazy, but looking at their Half year numbers shows a rather bleak picture. Jungheinrich is currently trading at 20×2019 PE and 2020 earnings are expected to decrease significantly. This is much too rich for conservatively run but cyclical stock, “pass”.

LEWAG is a 60 mn EUR holding company with one big holding, a company called HEGLA that makes equipment around the production and transport of flat glas panels. The company is thinly traded and results are hard to understand. In the 6M 2020, they increased sales by ~+40% but for some reason profit dropped significantly. The company seems to be run by a Father (head of supervisory board) and son (CEO) duo. Free float seems to be super tiny. “Pass”.

Wachenheim is a 125 mn EUR market cap company that specializes in sparkling wine. The company is 70% owned by the Reh family. To be honst, I never took the company seriously, I considered it to be a low quality stock, but somehow over the years they managed to do pretty OK:

The company just issued their annual report (FY 30.6.) with Ok results. Their “growth engine” is clearly the Polish subsidiary Ambra, which is listed on the Warsaw Exchange and where Wachenheim holds ~60%. The Polish subsidiary is doing really good, which means that the minority share in total profit is significant (5,4 out of 12) and one needs to be cautious with EBITDA multiples. I think if someone is interested in Wachenheim, the subsidiary Ambra is clearly the most attractive part, whereas parts of Wachenheim (France) are really struggling. “Pass”.

Looking at the 10 year chart of K&S, a 1.4 bn fertilizer company is very depressing:

The stock lost almost -90% from 2011. For long term investors this is especially frustrating as US/Canadian competitor Potash made an offer for 41 EUR per share in 2015. However K&S Management decided that the offer was too low (and that they want to keep their salaries) and since then did everything to sink the company.

Looking at their main numbers one can see that they successfully increased net debt and invested loads of money into a Canadian project. Profit today is at around 60% of 2010/2011 despite billions in investment.

the stock price recently went up a little bit because a sale of the US operation seems more likely. Interestingly, the CEO paid himself a decent 5 mn EUR in 2019. K&S would be a good place for a “Badass activist” but I guess maybe the business as such is not attractive enough. “Pass”.

Sloman Neptun is a 66 mn EUR market cap shipping company that transports liquefied petroleum gas (LPG) and chemicals. The company is majority owned and reporting is not very transparent. Profits are super volatile and look pretty arbitrary from year to year. I actually owned the stock a long time ago when it was dirt cheap but since 2006 the stock (and the business) is more or less flat. “pass”.