Links to previous Performance reviews can be found on the Performance Page of the blog. Some other funds that I follow have performed as follows in the first 3M 2022:

Overall, it is not a surprise that in a quarter where War returned to Europe, the overall performance was negative. Looking at the monthly returns however, the more surprising fact is that markets were negative only before the war started. The invasion started on February 24th and even the DAX is at a “pre war” level at the end of March, which is quite astonishing.

On a monthly basis, even for the portfolio, the month March was the best month, both in absolute and relative terms:

The performance as such is more or less in the range that is pretty random at a specific date (+/- 2% vs. Benchmark), but rather on the lower end of my “peer group”.

What should be mentioned, that three position together accounted for a significant part of the loss, which were Naked Wines, Zur Rose and BioNTech as can be seen in this table:

For all three positions, I realized  profits at much higher levels which reduced the overall “damage” to the portfolio. But overall it is interesting that almost all “hot” stocks from the pandemic time have been punished severely.

Another similarity is that these three companies do not have fully proven business models but nevertheless became “hot stocks” owned (and shorted) like other hot stocks. Their aggregated weight is now ~7% from almost 12% at the beginning of the year.

Q1 was clearly more busy than usually. In January, I sold Agfa and ABB to finance my new Nabaltec position and in February I sold NKT.

Following the the Russian invasion of Ukraine, I came to the conclusion (as documented in new Panic series) that I want to position myself even stronger with regard to Renewables and Electrification plus an opportunistic position into the LNG space.

This was financed by sales of Play Magnus, Richemont, Nexans and Washtec. In the case of Richemont, I consider these shares as fully valued, the other three positions were smaller ones with limited conviction considering the macroeconomic background.

In addition I opened a new 4% position in Gaztransport, an LNG specialist that I owned before to opportunistically benefit from the expected surge in LNG business.

Towards the end of the quarter, I started to sell down my FBD position.

The current portfolio can be seen as always on the Portfolio page.

Over the past few months I have “discovered” Podcasts both, as a good source of entertainment and information. It started with a German Podcast called “Doppelgaenger” where two guys discuss mostly tech stocks twice a week. I then discovered a few other Podcasts that I like a lot.

What I appreciate a lot is, that as I stare on the screen most of the day, listening to a podcast is a much better way to relax during a commute than trying to read a book or the Kindle. With the mask, my glasses are always foggy and especially now, as my commute currently includes getting of a subway, getting into a bus, getting out of the bus, getting into the subway again, listening to a Podcast is much easier than reading a book or the kindle.

Another interesting aspect is, that as a Spotify user, the availability of Podcasts has made me an even more convinced Spotify user (and payer) than I was before. Spotify is giving me these Podcasts without the need to pay more, which is a really good deal. maybe I should look at Spotify as an investment case at some time.

My current favorites are:

Kindly let me know in case you can recommend other podcasts (German/English) that are both, entertaining and informative.

In my last Panic journal ramblings, I speculated if the markets are where they are because people think that Russia is not a big deal. Another explanation could be the following: With inflation where it is, and real yield in deep negative territory, a lot of investors think that equities are a great “automatic” hedge for inflation.

In theory, if a business is able to raises prices equally than its inputs, nominal profits year on year should go up by nominal inflation (all other things equal). However what is the impact if for instance interest rates rise or price increases are slower/faster than cost inflation etc. etc.

As I can think better when I create a Spreadsheet, I did create a spreadsheet that simulates a very simple company and allows me to simulate inflation over the next 10 years, separately for Sales, cost and Capex as well as debt, interest rates and depreciating assets.

In my base example, Sales and Costs rise bei 8%, interest rates stay constant and the company has depreciation of 10% of sales. The impact on profitability looks as follows: 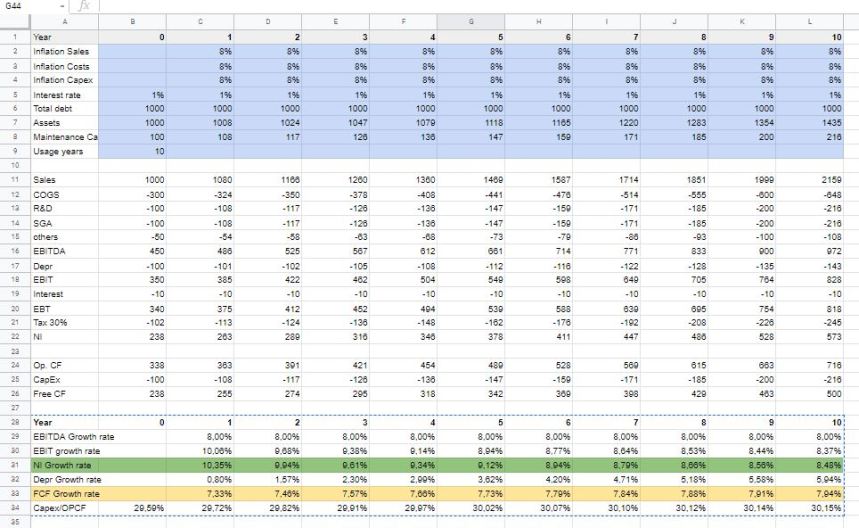 What we can see is that EBITDA growth is indeed exactly 8%, however Net Income growth is even higher, however FCF growth is slower.

The explanation for this is the fact that Depreciation is always based on historical cost and is lagging inflation.  However in the FCF calculation, if these companies maintain their normal Capex, the effect of more expensive equipment can outweigh the positive effect on EBITDA depending on the asset intensity of the business.

Nevertheless, such a company should increase its value more or less by the rate of inflation and therefore it would be a good hedge.

2. Asset heavy business (no change in IR, same inflation for everything)

Here is the same example, only with an asset base (and Depreciation) 3x of the base case:

Here, the Net Income growth rate is far higher than inflation, the FCF growth rate a lot lower. This is something one usually sees in asset heavy companies in high inflation countries: they look very cheap from a P/E basis, but are often struggling to generate FCF. What often happens is that the companies then cut back maintenance Capex which helps short term but creates big issues in the long term.

Here, the expected increase in company value should be slower than inflation in the long run, as FCF will determine company values over the long term. However in the short term, the increase in net income could maybe trigger speculative increases.

Back to the Base case: let’s assume that for some reason (Substitution etc.), the company is only able to raise prices at 50% the level that costs are rising. Then the profitability develops as follows.

What we see here is a Net income that is declining relatively slowly, whereas FCF is declining even faster. here obviously, the value of the stock should decrease as profits and FCF decrease. This company would be not an inflation hedge, but the opposite.

Back to the base case and this time we assume that the interest rate on the outstanding debt increases from the intital 1% to 8% over 8 years, all other things (inflation at 8%).

As we can see, net income increase but less than inflation, FCF increases significant below the rate of inflation.

The final scenario here is that i assume “pricing power”, i.e. that that the only adjustment to the base case is to increase sales by +10% p.a. and leave cost inflation at 8%.

In such a scenario, life clearly is good for the company. The only problem of course is to determine which kind of companies do have this kind of pricing power in the current environment. For instance, a company that produces stuff locally and competes with foreign competitors that are subject to supply chain disruption could be one example.

I could mow go on and create dozens of other scenarios but I want to leave my readers with three takeaways with regard to stocks and inflation:

For anyone interested in playing around with the sheet, here is alink to a copy: Inflation