This is a clearly a first for the blog: A movie review and not a book review.

I had read the book from Michael Lewis a couple of years ago and it was clearly the best of many books trying to explain the sources of the “financial crisis” 2008/2009.

Honestly, I could not imagine how you can  make a Hollywood movie out of this book.

The  story is mainly about a couple of  fund managers who discovered at the same time around 2006/2007 that the US mortgage market was deeply flawed especially in the subprime area and that it was only a matter of time until everything would break down.

Most of those fund managers were “ousiders”, so not mainstream super star hedge fund managers but strange guys like Michael Burry, the now famous medical doctor turned fund manager with the Asperger Syndrom or the 2 guys who founded their fund as students with 100k start capital in a garage.

Another important role was played by a Deutsche Bank investment banker Greg Lippmann (in the movie the guy is called Jared Venett) who tried to sell the instruments to bet against sub prime mortgages.

Overall I found the movie extremely entertaining and very good. Why ?

Secondly, the movie gets surprisingly almost all the facts right. They do explain the underlying concepts very well and often in surprisingly funny ways. One of my favourite scenes is when Selena Gomaz and Richard Thaler explain the conceptof CDS/CDOs at a Las Vegas Black Jack table.

Of course they made some compromises to turn it into a Hollywood movie. Nevertheless I do think that the movie actually shows a pretty acurate picture of investment banking back in the heydays of 2006/2007.

Of course the characters in the book and the movie were not the only ones who predicted the subprime crisis. Back then a lot of people were sceptical with regard to mortgages banks etc.

But I think what the movie really showed was how difficult it is to actually bet significantly on a “doomsday prediction”. Betting against subprime CDOs required those  guys to pay signifcant amounts of “insurance premium”. In Michael Burry’s case, the “negative carry” was something like -20% p.a. for the full portfolio. In all cases the managers were not credit specialists and investors clearly  didn’t like what they saw at first and in Burry’s and Iceman’s case tried to force them out of their positions because very few people are willing and able to sacrifice yield in order to make big returns.

It is very similar to what I wrote a couple of months ago: A great idea or a great strategy alone is worth exactly nothing. Yes, you can maybe sell some books as the guy “who predicted the last 5 crashs”. But if you manage money you have to actually execute it well in order to create value.

And I do think that this is the main lesson form the book and from the movie: It takes a lot of guts and a kind of “outsider” status to actually be succesful when you bet against the overall consensus. Talk is cheap, actions matter.

The second lesson was that patience also plays a big role in actually scoring big. All the portrayed fund managers were early with their trades and the position went against them at first. In Eismann’s case all his partners for instance wanted to sell quickly after they were back in the green, but he insisted on waiting.

Another good example of this rare persistence in adverse situation was Bill Ackman who at the same battled mortgage guarantee company MBIA on their role within suprime mortgage business. Hi fought them over years until he had finally his big pay off. There is a good book about this story as well, “Confidence Game” 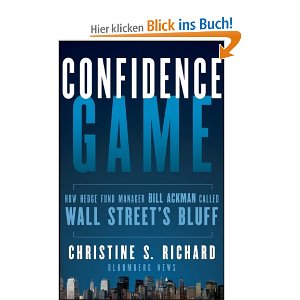 So my recommendation for anyone at least partially interested in finance is clear: Go and see the movie !!!!

I actually think the movie should be a mandatory part of any finance course at schools and universities like the original “Wall Street” movie.