Already a couple of weeks ago, Handelsbanken issued their 2016 annual report. On the surface, the numbers look like a small disappointment with flat profit and a slight decrease in EPS.

Behind the surface however, some things happened. The CEO was fired in 2016 for “too much centralization”.

Some highlights of the annual report from my side:

During the year, continued adjustments were made in branch operations, not least as a result of changed behaviour resulting from digitalisation. Several of the Bank’s major city branches left premises at street level to move to more fitfor-purpose premises a few floors up. At the same time, several of the Bank’s branches in small towns have moved to new less centrally located premises. The business operations of nine inner-city branches in Stockholm, Gothenburg and Malmö, together with that of 30 branches in other locations were merged with large branches nearby

Loan losses rose to SEK -716 million (-299), chiefly due to an increased provision made on a single customer exposure. The loan loss ratio increased to 0.85 per cent (0.37)

Oktogonen
The decision not to make a provision for Oktogonen for 2016 was due to the sharp increase in the Bank’s capital requirement announced by the Swedish Financial Supervisory Authority in early 2016. During the year, the Bank continued to generate capital. Taking into account the outcome of the Supervisory Authority’s capital
assessment, the Bank’s assessment is that provisions for Oktogonen can resume during 2017.

I found this very remarkable. Any other bank would either have lowered the dividend or issued some form of capital. In my opinion this clearly shows the very unique alignment of bank, shareholders and employees.

Readers of my blog know that for banks I consider Comprehensive income as much more important than net income. Why ? Because the ability to write business and distribute dividends depends fully on the amount of capital available. For most banks net income does not capture the full change in capital. This is the comprehensive income statement for Handelsbanken: 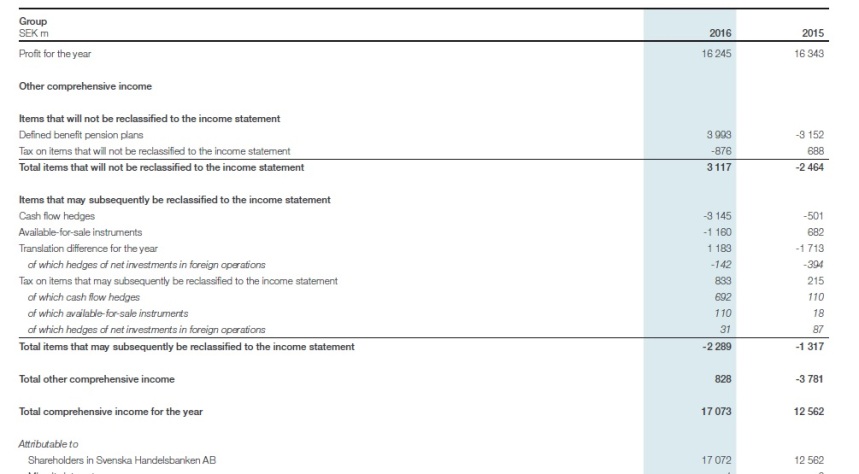 This compares to the following actuals:

So this looks like that I am behind my assumptions although not that much. the 10 SKK difference in book value are explained by around +7 SKK more dividends paid.

On the other hand, with a P/B ratio of 1,78 and a trailing P/E of 14,8, the stock is cheaper than back in early 2015. Plus, most other stocks are much more expensive than 2 years ago. So relatively speaking the stock is more attractive. I still think that at the current stock price one can expect to earn 12-14% p.a. in the long run.

Some reader will think: but hey, it is clear that they cannot reinvest as assumed so this clearly is not a compunder. But here kicks in the philosophy of Handelsbanken: Their whole system is set up to be countercyclical. In hot markets like right now in Sweden, they grow less than they could, only to then really grow strongly after the next cyclical down turn.  I still belive that in the long run they will be able to compund at a higher rate that they did last year and the year before.

One fun fact: Analysts never really liked Handelsbanken. This is now almost at an extreme: Among the Stoxx 600 constituent, Handelsbanken now ranks number 593 in terms of analyst consensus. Among the 33 analysts following Handelsbanken, 21 say “sell”, 9 “hold” and only 3 think the stock is a buy. The average target price is 118 SEK.

I can only speculate at the reason but I would assume that the major reason is that the stock looks “too expensive” compared to other banks and analysts who usually have short time horizons prefer cheaper banks because they think the have more short  term upside (if nothing bad happens).

Despite the unspectacular results, I do think that Handelsbanken is on a good track. Clearly a lot of other banks promise potentially higher short term returns, but as the future is always uncertain, I think chances are good that Handelbanken will beat them (again) in the long run.

I also like the fact that this unique company seems to be totally misunderstood by analysts. Instead of comparing Handelsbanken to badly run banks like Deutsche Bank or Commerzbank, I think the right comparison would be other high quality non-banks which trade at significant higher multiples.

But even without any multiple expansion, I do think that Handelsbanken will be a good but unspectacular long-term investment, exactly what I am looking for.

For the portfolio, I will in a first step increase the allocation by ~0,8% with more to follow.This is a company where I want to be a long-term owner because I think it is one of the best run financial institutions in the world.

P.S.: I do like the letter from the new CEO. Already the start is a very nice change to anything I read from a new CEO before:

My name is Anders Bouvin, and last summer I became President and Group Chief Executive of Handelsbanken. I have worked for the Bank for 32 years, most recently as Head of Handelsbanken UK. This is my first time to comment on the year as Group CEO, so let me say right from the start that anyone expecting a grand declaration of new, exciting corporate goals, bold strategic shifts and radical changes in our business model may well be a bit disappointed. Our corporate goal stands firm. That is, we must deliver a better return on equity than the average of our competitors’. We will achieve this by having lower costs and more satisfied customers than the other banks.