So where is the upside ?

After “bashing” them in the first post, the question is: Is there an upside and if yes where ?

With Steve Kaufer, the CEO, one of the founders is still on board. His salary is rather modest but he got plenty of options awarded in the previous years. According to Bloomberg, he received option in the original value of ~33 mn USD in 2014 to 2016. He owns  shares in an amount of 17 mn USD, which is not huge but still not insignificant.

In his 2016 letter to the shareholders he writes the following:

Some Thoughts on Capital Allocation
We operate in an attractive marketplace and focus our efforts on long-term growth objectives. We continuously evaluate opportunities where we can allocate investment dollars to earn the greatest returns. In addition to the organic investments we have made and will continue to make in our business, we also seek returns through strategic acquisitions, some of which bring more talented technical resources into the fold, some that augment our product capabilities, and others that help expand our geographic footprint.
Additionally, the reduction in our share price enabled us to invest in ourselves, as we were able to dedicate $105 million to repurchase our common stock during 2016. Having reached the $250 million limit of our share repurchase program, earlier this year our Board of Directors approved another $250 million of share repurchase
capacity, giving us another tool to increase per-share value for long-term shareholders.

This in principle sounds very good. What I do like is that they buy back stock cautiously out of available cash and do not leverage up like for instance Fossil.

So this seems to be a plus for Tripadvisor.

Despite the reduced GAAP result in Q1, the company ist quite cash generative if we look at the Q1 report 2017. Working capital is slightly negative which could become even better when they do more bookings.

Negative working capital has a flip side though: if sales are shrinking, then you suddenly need more cash. Nevertheless Tripadvisor generated ~ 100 mn free cashflow in the first quarter, roughly the same amount as 2016. However, looking at the 2016 annual accounts, one cannot multiply this simply by 4. Total free cash flow was around 250 mn USD in 2016, if we would adjust for stock based compensation (which I think should be treated as operating cash out especially if your stock is going down)  it would be below 200 mn USD. With a market cap of 5,5 bn, this would be a free cash flow yield of below 4% with a negative trend.

So yes, the company is capital light but it is not a “cash machine” and cashflow seems to be also on a downward trend since 2014.

One recurring theme is the following: It is an attractive target for almost any (larger) travel company. Rumors are there for a long time, for instance that Priceline might be interested. The Chairman Greg Maffai himself mentioned not so long ago that TripAdvisor’s user base could be worth more to someone else and that this should put a “floor” on the valuation

It is also interesting that the most well-connected Chinese venture/PE firm Hillhouse Capital holds a stake. So yes, there is clearly the chance for a deal happening at some point in time.

Nevertheless, I personally found “M&A fantasy” usually not a good reason to invest. As this is clearly not a secret, part of that will most likely be priced in already. If then nothing happens, the downside could be substantial, especially if fundamentals deteriorate further.

I found this very interesting comment from the CEO of Kayak on Tripadvisor which enforces my view that the Tripadvisor business model is clearly “Under pressure”:

Hafner: TripAdvisor is encountering challenges on numerous dimensions. They’ve got Google clamping down on their free traffic on SEO [search engine optimization] by sending that to their [Google’s] own Hotel Price Ads. They’ve got Trivago massively outspending them to get the hotel shopper to test direct. And then they’ve got the self-inflicted wounds of Instant Book, which has cracked their economics and then clicking out of their consumer experience and it hurts their ability to invest in marketing.

So they’re [TripAdvisor] in a tough spot. I typically don’t give free advice out to fellow CEOs especially to ones I respect as much as Steve Kaufer. But I think he will make some changes on the Instant Book side.

Skift: I guess we’re going to find out soon. They can’t keep going on like this for too long, I don’t think.

Hafner: Yeah, I mean, if it does, you’re going to have a change of leadership there. Unfortunately. I know I wouldn’t keep my job at Kayak here for very long, if I were going down a similar track.

Skift: And it’s sort of the natural evolution of things that often, as you know, founders don’t make the cut as the company matures. So we’ll have to see how it goes.

So Tripadvisor is clearly squeezed from many. Personally, I don’t find the CEO quite nice but not very convincing. Look at this video:

My impression is that he really “lives” his business model and believes in his brand but that maybe the world has moved on to a certain extent. I also think that just adding a booking feature to their website doesn’t change a lot. There is a lot more know how required in order to “convert” web users to actually do a booking and booking.com seems to be a lot better in that.

What I also find interesting is that another review based site, restaurant review company Yelp experiences similar troubles and similar bad stock performance (Yelp in yellow, TRIP in blue): 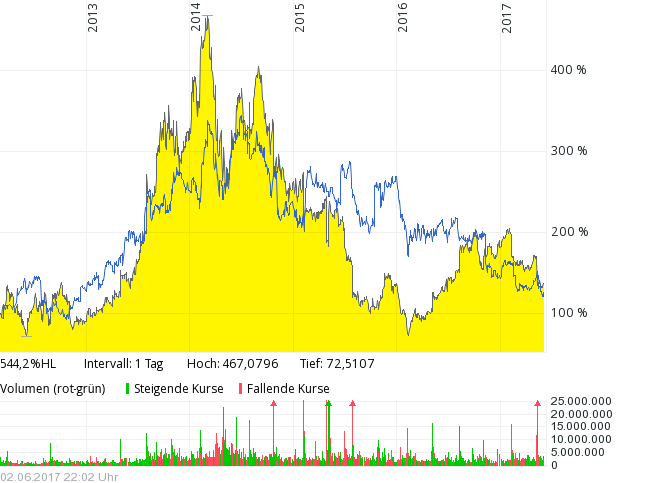 My personal suspicion here is (again) that the traditional “internet review” business model seems to be not working very well any more. As I have mentioned in the first post, I think despite Google’s efforts, social networks play a big role.

Young people don’t write detailed reviews on their mobile phone. They seem to prefer to share some pictures via Facebook or Instagram with some very short comments. Tripadvisor clearly tries to react in becoming a booking engine but if this really works against its much bigger competitor remains to be seen.

I have listened to a couple of interviews with Tripadvisor executives and what I found strange was that they sounded like managers running a utility company. They always stressed their number of users, members, reviews and hotel listings and that the only issue is to make this more user-friendly (and include booking functionality). Not even once they touched the issue that maybe the review based business model itself might have some serious flaws in the age of social networks.

The next step is most likely  voice driven searching and booking which the CEO of Priceline Group touches in this video, where as far as I can see, Tripadvisor has not even started thinking about. Maybe Amazon is entering the market at some point as well ? Then things could get really interesting.

What does this mean to the hotel sector ?

One interesting and even more difficult question is: What does this mean to the hotel sector ? Theroretically, increased competition should drive down booking commissions. Hotels currently pay around 15% commission on the room price to the guys like Priceline etc.

Listing directly on Tripadvisor for hotels should save costs as Tripadvisor seems to “undercut” a little on fees, the same goes for Trivago. In theory, cutting out the powerful OTAs then seems to be good for hotels.

On the other hand, many areas on the web have been a clear “the winner takes it all ” area. No matter on which search site (Google, Trivago etc.), the top spots are getting “auctioned” and going to the biggest or smartest bidder, which might not be the independent hotel. I think sometimes people underestimate the skill of players like booking.com when it comes to marketing and “conversion” of inquiries into bookings.

It remains to be seen how this works in hotel booking area, but I think also for hotels  things are not so easy. On top of that you have well-known Air BnB which (if it is allowed by authorities) allows private people to compete with big hotels and reach global distribution at relative moderate cost.

Summary: Overall, online travel at the moment looks like “too hard” for me

The more I look into those companies, the more difficult the sector seems to become. There is a lot of fundamental change going on, Which on the one side is good for agile players but on the other hand makes it very difficult to predict anything and extrapolate trends from the past.

As a Value  Investor, unpredictable fast-moving industry changes are difficult. In order to invest in such a sector, there should either be a significant moat and/or fantastic management or a very cheap valuation.

Tripadvisor unfortunately neither seems to have a great moat, nor do is it very cheap on GAAP basis despite the recent fall of the share price. Some might be able to price it based on “eye balls” etc. but I think that is quite difficult for a web site which is free to use.

So for the time being, Tripadvisor again was an interesting study object but clearly not an investment for me.