DISCLAIMER: THIS IS NOT INVESTMENT ADVICE. PLEASE DO YOUR OWN RESEARCH !!!!!

I guess Hewlett-Packard doesn’t need a lot of introduction here. Founded in 1939 it was one of the predominant technology companies for many years but then somehow lost its mojo. Funnily enough a German CEO marked the end of a long buying spree by acquiring the more or less worthless UK Software company Autonomy in 2011 for 11 bn USD.

In 2011, Meg Whitman, the former CEO of Ebay took over and since then tried to consolidate the company. 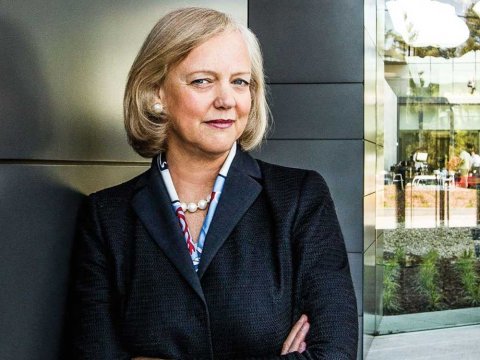 Spin-offs seem to have become one of her favourite tools and HP actually already did 2 off them in the past and the third one will come up soon. Lets look at them in more detail:

Interestingly, both companies performed better than Nasdaq since then. HPQ actually slightly outperfomed HPE especially since the beginning of 2017 as we can see in the chart (HPE white, HPQ yellow, Nasdaq red):

Just a few weeks ago, HPE spun off their “Enterprises Services” business and merged it with listed company CSC which then was renamed DXC. HPE shareholders received around 8,6 Shares of DXC for every 100 HPE shares they were holding.

The transaction was done as a “Reverse Morris Trust” which seems to be a very shareholder friendly structure as it is tax-free in the US if all conditions are met.

Interestingly, the DXC shares did relatively well after the spin-off merger , HPE shareholders didn’t dump the shares as one could have expected. It is also interesting to see that the value of the spin-off merger for HPE increased significantly between announcement and execution from this table:

So clearly this transaction made everyone happy, both CSC shareholders and HPE shareholders.

The third spin-off is again structured as a Reverse Morris Trust and will happen at some point in the next few months. This time, the “non core” software business (incl. the infamous Autonomy) will be spun off and merged with UK company Micro Focus. At announcement, the deal was worth 8,8 bn USD, which consists of 2,5 bn USD in cash and 50,1% of the new combine company as “spin-off” dividend for HPE share holders. As the Micro Focus stock price increased further, at the time of writing, the stock component would be worth almost 7 bn USD at current prices.

A few words on Micro Focus

Micro Focus itself is an interesting company, specializing in buying troubled software companies with “Mission critical” software products and “milking” them by slashing costs etc. This passage from the last annual report sums up their philosophy quite well:

Each year the world of IT gets another year older (and we should remember that IT is still a relatively young industry). Whilst the vast majority of companies will chose to focus on the “new and exciting”; we believe that there will be an increasing opportunity to help clients derive value from their existing and often highly complex IT investments.

The company seems to be very shareholder return oriented which shows in their fantastic results since they went public in 2005:

I guess that one would call a serious compounder. For them, the HPE deal is a huge one and clearly a risk. However if the manage to bring this business close to their own profitability, the upside would still be very significant. All in all I think that this could be a similar accretive deal as the CSC/DXC deal for HPE share holders.

On top of those listed spin-offs, HPE has sold/merged 51% of its Chinese business into a 49% stake of a company called H§C (deal value ~2,3 bn USD). Another 0,8 bn were realized by selling their stake in Indian IT services company Mphasis to Blackstone last  year.

Management and will HPE “shrink to greatness ?”

Personally I do like the “slimming down” and think a more focused strategy promoted by CEO Meg Whitman is a good one:

“The bigger you are the harder it is to be fast, because you’ve got so many people involved in every decision. Our view was – given the backdrop of the technology industry – [being] smaller [and] more focused was going to be important,” she says.

HP got into trouble because the previous CEOs followed the mantra of bigger is better. So I think it might be a good idea to focus on the core of the company. It needs to be seen if Dells strategy to take on 57 bn USD of debt to go private and then combine with EMC is better. As a CEO of a public company and especially right now, the easier strategy would actually be to do many big acquisition funded by cheap debt. HPE does the complete opposite which I find quite compelling. In my definition of “Outsider company” which means doing things differently than anyone else, this comes quite close to being an “outsider old school tech company”.

So far Meg Whitman (herself a billionaire after running Ebay from 1998 to 2008) in my opinion did a very good job to create value for shareholders. Spinning off companies to shareholders allows the shareholders o decide if they want to keep that part or sell it and the previous “spin-off merger” definitely created value for all parties involved.

But not everything is about shrinking. HPE did some acquisitions as well which so far seem to have been OK or even good. More recent ones were:

Especially the Aruba acquisition seems to have been quite smart according to several articles I read.

Overall I would give her and HPE very good grades for capital allocation. On top of the spin-offs, they have been buying back stock at reasonable levels and the acquisitions so far look strategic and reasonable.

I don’t claim to be a big expert on their “enterprise” business.  From what I understand, they provide servers, storage and network hardware plus services (incl. financing) for big data centers either for companies or other large institutions.

The biggest short-term danger for this model danger is clearly the cloud. Companies like Amazon seem to use “No name” hardware because its cheaper but 85% of the business is still traditional business and I am not sure that everyone wants to migrate to Amazon or Microsoft. HPE claims that big companies will eventually implement a “hybrid cloud” solution which means a private cloud with own machines within a company and usage of a public cloud for less sensitive issues. In general, moving everything into one central cloud is also legally not as easy as it looks.

Some people who are way smarter than I am, like this guy from Andresen Horowitz actually think that cloud computing as we know it doesn’t have a bright future. The same guy also sees a very bleak future for data centers in general:

The point is not about startups challenging Intel (though that may happen). It’s about startups leveraging different hardware (ARM processors, flash storage, and networking) to build systems that are largely software enabled — thus bypassing legacy models, where the value was in fat margins on hardware and in on-premise installations.

Those guys are clearly talking their book but its clear that the data center business might undergo significant change in the (near) future.

HPE’s biggest competitor is clearly Dell which recently acquired EMC and targets the same markets plus maybe IBM. However, with such big changes on the horizon, I am not sure if it is a good idea to be leveraged up to your neck like Dell.

Very recently HPE seems to have lost a lot of business from their biggest customers,   most likely Microsoft. So there are clear headwinds even in the current model. On the other hand, more focus on the core business might help.

There is a pretty detailed post on VIC about HPE from last year which in general is still relevant (although sales have clearly done worse than expected.

The financial services business (financing the equipment for clients) seems to do good at the moment with still increasing sales and profit, however financing value seems to have been stable.

For valuation purposes, the debt of the FS segment should not be added to EV as there are corresponding financial assets. According to the Q2 presentation, FS net debt is around 10,3 bn USD, leaving HPE with a net cash balance of 4,4 bn USD at the end of Q2.

Bringing it all together: Valuation

After all the mentioned spin-offs and disposals, HPE will have a healthy cash balance plus HPE shareholders will own either directly or indirectly a lot of “extra assets”.

So therefore a “sum of parts” valuation makes a lot of sense. I have created a table with 3 scenarios (base case, bad case, good case) which of course contains a lot of critical assumptions:

Clearly one can challenge any single assumption here but overall I think the cases could be realistic. Based on my assumption, the results are clearly interesting: a +43% upside in the base case, more or less fair value in the downside scenario and a healthy +68% upside in a good scenario.

For me this looks attractive. Maybe not a “grand slam home run” but importantly: Good enough and could return 20% p.a. over the next 2 years in the base case.

Just being attractive based on a sum-of-part basis alone often is not so compelling. However in HPE’s case I think there are a couple of catalysts which could affect a significant revaluation at some not so far point in the future:

So all in all one could expect that the discount to the “sum of parts” valuation could be closed within the next 1-2 years which would be my time horizon for this “special situation”.

Tha biggest risk is clearly that the core business continues to deteriorate fast. I am inclined to believe management that this will not be the case but there is clearly a risk. If the business really deteriorates more than management indicated, I think one clearly needs to “eat any loss” and sell because then the downside is hard to quantify.

Plus, Meg Whitman will not run HPE forever. She is no 61 years old and had ambitions in the past to get into politics. My expectation is that she will stay at least until HPE can show the numbers for a “normal” year which would mean FY 2018. If she leaves then there clearly would be the risk that someone else thinks that going on a buying spree might be a good idea.

There is also the risk that for some reason, HPE shareholders would dump MF shares after the spin-off. Plus, as always, HPE could make a big (and dumb) acquisition and destroy value like they did in the past. This would also be a reason to sell the stock if that happens.

Overall, I do like the case. There is a clear upside in my opinion combined with some “soft catalysts” that makes the stock attractive for my “special situation” bucket. I also like to retain some USD exposure as my Actelion position got closed out last week.

I will therefore initiate a 3,3% position at current prices at around 16,50 USD / per share for the “special situation” bucket.

P.S.: A big “Thank you” for the friend and reader who mentioned HPE to me as a potential idea !!!