Disclaimer: This is not investment advice. Please do your own research.

April SA is an “Old friend” on this blog. I owned the stock in the past and last time I looked at them when a rumour came up that the company is for sale in late October.

This is what I said back then:

April had shown actually pretty decent growth in Q3 and I actually considered buying some shares but maybe this is not so sustainable and the founder wants to sell before it is getting worse again ? Who knows…

My fundamental assessment of April is that they have a strong core business (French Broker) but have over extended themselves internationally and the founder, Bruno Rousset, who stepped down in 2014, does not have the energy anymore to turn this around himself.

Well, things have progressed. There had been a “beauty contest” with PE bidders and it looks now that PE shop CVC is highly interested in buying the stake of the founder and majority owner. This is from a piece of news released by April SA and  CVC end of December:

Negotiations regard proposed transfer by Evolem of its majority shareholding to CVC Fund VII followed by public tender offer Following an analysis of various strategic options regarding the future of its equity interest in APRIL, Evolem, which holds a 65.13% equity stake in APRIL, launched a competitive bidding process resulting in a number of offers being handed out.

At the end of this process, Evolem entered into exclusive negotiations with CVC Capital Partners (“CVC”) regarding the transfer by Evolem of its majority shareholding in the Company to a takeover company controlled by funds managed by CVC in which Evolem would hold a minority stake alongside the funds controlled by CVC and APRIL’s management.The transfer of the majority block would be carried out at a price of € 22 per APRIL share, entailing a 27.2% premium over the last closing price before the announcement of the offer (on 28 December 2018), 36.9% and 40.4% over the weighted average share price for the last 3 and 6 months, respectively, and 75.3% over the undisturbed closing share price (before April’s October 22, 2018 press release announcing the review of strategic options by Evolem regarding its majority stake in APRIL).

Readers of the blog might remember just from a few weeks ago as they are also the guys wanting to buy Ahlsell in Sweden.

Their current fund, CVC fund VII was at inception the largest PE fund in history with commitments of almost 18 bn USD (!). So both, Ahlsell and April are relatively “small fish” for this fund and money is not a problem for CVC.

Even before the announcement the stock started to move and reached now around 20,40 EUR per share: 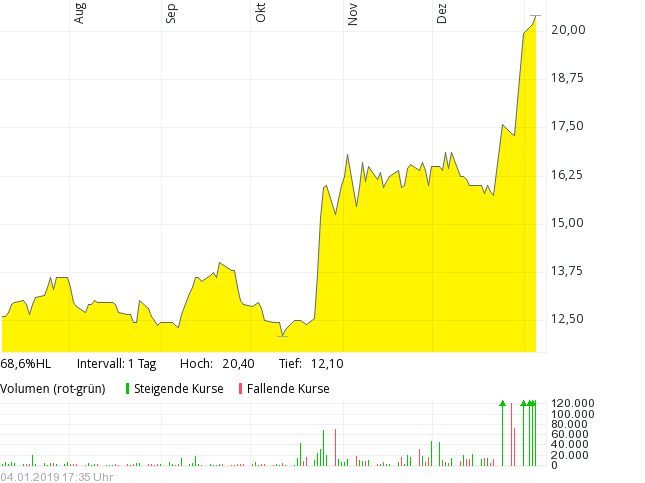 The interesting part of the news from above for minority shareholders was this:

In accordance with applicable regulations, upon completion of the block transfer, the takeover company controlled by funds managed by CVC will file a simplified public tender offer for the remainder of APRIL’s share capital at the same price as paid to Evolem.

So at 20,40, the share trades at a discount of 1,60 EUR or a theoretical upside of around 7,8% to the potential offer price which looks attractive.

What are the risks ?

As the premium to the undisturbed price is relatively high (around 75%), a complete failure of the transaction would clearly have a significant downside risk

At this stage there is clearly some residual risk that the deal will not happen at all. Although I think this risk is small: The founder and majority owner clearly wants to sell and CVC clearly wants to buy and they have more than enough money to do so. CVC has also a pretty decent reputation for a PE Group that they close transaction very reliably.

Even if CVC for some reason would not close, there would be other buyers that might want to pay a little less but I think the probability of a deal is very high.

Another risk are potential price adjustments. This is from the press release:

This price could be subject to an adjustment equal to the cost (on a cost per share basis) incurred by APRIL (or its best estimate) at the date of transfer of the controlling block held by Evolem, subject to a 10 million euros deductible, in connection with the proposed tax reassessment from the French tax administration, following investigations on the territoriality of the reinsurance business conducted by Axeria Re, its subsidiary in Malta (see the APRIL press release dated 24 December 2018)1. The price could also be reduced by any distribution which would occur prior to the completion of the block transfer.2

So the second adjustment is pretty clear: Any dividend paid before the closing of the deal will be subtracted from the offer price which is OK.

The first adjustments seems to refer to an open tax question. This is what can be found at the bottom of the release:

1 i.e., by way of example, a downward adjustment of € 0.12 per share on the basis of the provision the company intends to register in its 2018 accounts (see the APRIL press release dated 24 December 2018).

So it seems that the “expected value” of this adjustment is 0,12 EUR or an effective offer price of 21,88 EUR/share. This could be clearly also more or less but I think if they state that value, the variance should not be too high

Timing: According to the release, the transaction, including the minority offer is expected to be completed within Q2:

Definitive agreements relating to the bloc transfer could be entered into following the completion of the relevant legal obligation procedure with respect to the employees. The completion of the block transfer would also be subject to regulatory approvals in France and abroad and is expected to be completed during the second quarter of 2019.

In France, there is always the issue that employees have to somehow approve this but I am pretty sure that both parties have checked this and CVC has a long history of successful French buyouts.

Nevertheless, I think CVC is highly motivated to close this transaction. Healthcare is one of their core areas, and I think April could be an interesting part of a health platform play for them.

At a current price of ~20,40 EUR per share, April offers a ~7,3% (to the adjusted offer price) upside for a potential 6 month period until the offer from CVC is expected to be completed.

As I am quite familiar with the stock, I am prepared to take the downside risk of the relatively high acquisition premium, as I think the probability to close is high and the fundamental value of the stock is closer to the acquisition price than the original, undisturbed price.

Disclaimer: This is not investment advice. Please do your own research.