Deutsche Familenversicherung AG (DFV) IPOed end of last year and claims to be the first stock listed “Insuretech” in Europe. The IPO was only successful at the second attempt but still they made it. In their investor presentation they even call themselves “Europe’s leading Insurtech” which is a pretty bold claim.

Excursion: What does Insurtech /Fintech mean ? And what does digital mean ?

There is clearly not general valid definition of Fintech /insurtech, but looking at the Fintech space, one would characterize these companies as technology driven companies that use technology to do things faster, cheaper and better than thier “ordinary” competitors.

In my opinion, “digital” is a very misleading description as many financial companies are to a large extent “digital” but with very old tech. A bunch of spreadsheets is clearly digital but I would not consider this as “tech”. With regard to Fintech / Insurtech the best players usually are charcterized by a combination of the following attributes:

As an example, for instance Paypal, the most well known and most successfull US Fintech “only” made the user experience for online payment significantly better, allowed users to transfer money among themselves globally for a fraction of the cost of the old competition. This looks simple from the outside, but was not so simple to implement. Howeveronce implmented, network effects created a significant moat around the product and allowed the company to grow and become profitable. And for some strange reasons, none of the traditional players could offer such a product although many tried.

The Insurtech space is clearly a couple of years behind the Fintech space. There are only a few Insurtech unicorns now. The ones I know of are Lemonade, Oscar and Root. Looking at the characteristics above, Lemonade is clearly a user Experiecne /Customer acquisition story wheras Root and Oscar are more data plays. What all have in common (as Paypal) is that they start narrow, become very good in their niche and then try to expand on their platform.

So far, the stock has not done that well and trades -10% below the IPO price:

Some numbers based on the 2018 annual report:

So what DFV has in common with many Fintechs/Insurtechs is that they make losses despite being already “grown up” as a 12 year old company, Unfortunately however this is not driven by explosive growth but by a shrinking top line. The give some explanation for this (i.e. a Co-insurance agreement ended and that the custumoers they showed were not really their customers), but overall this doesn’t look good. Even growth in the “core” supplmental dental insurance is “only” high single digit percentages.

On positive aspect are the admin costs they show on page 62 which are at 7 mn EUR and translates into 10-11% of written premium which is Ok.

More interesting is the fact that although claims ratios are low, (~40% of premium), especially in their core business, claims ratios increased (page 62). This looks like that the increase in customers in these segements correlates with lower quality customers.

Another interesting aspect are sales cost which they show on page 62. Gross sales cost increased to 22 mn from 17 mn, which equals a hefty 37% of premium. On their investor presentation they interestingly only show growth numbers in terms of “new business” but not in terms of total business. They boast that they managed to get 55k new clients with only 110 employees.

With this information we can calculate some unit economics:

With an acquisition cost of 400 EUR, they need to reach 83% Combined ratio just to break even, without earning any money on their capital employed. Although it is not totally unrealistic to reach such a level, I do think that their acquisition costs are far too high for a sustainable profitable business.

The claims ratios for their two main product lines for 2018 are 55% and 12,9% which for most types of insurance are considered low (55%) or extremely low (12,9%). Considering that ususally around 50% of claims cost are adjustment costs and therefore only 50% of claims are actually paid to clients, the actual value that people are getting from these products is not great. As Insurance customers are not totally stupid, in the long term this leads to either very high churn and/or high customer acquisition costs. Or some competitors come in and lower the price to a level where claims ratios are a lot higher.

For comparison, the most famous US based Insurtech startup Lemonade promises that only 20% of the premium for their product (renters insurance) covers cost and profit and 80% will go towards claims.

Back to DFV as Insurtech /Digital

It is pretty obvious why DFV wants to be seen as Insurtech: Valuation multiples for these kind of (fast growing) companies are much higher than for traditional players. however, being digital doesn’t mean that you have an app or a nice website or in the case of DFV that you can access them via Alexa. This is what in the meantime most of the traditional players offer.

Being digital in my opinion means that digital is basically THE ONLY WAY that you can interact with such a company. Looking at DFV I have big doubts that this is the case.

Look at their app for instance. They have around 450k customers but their Android app has only 5k downloads. Applying a “Normal” 10% active user ration this means 500 clients might actually use the app or ~0,1% of the client base. Even if I assume that they have a high share of clients with Apple devices, this is almost nothing.

Another strong counter indicator is the management team: 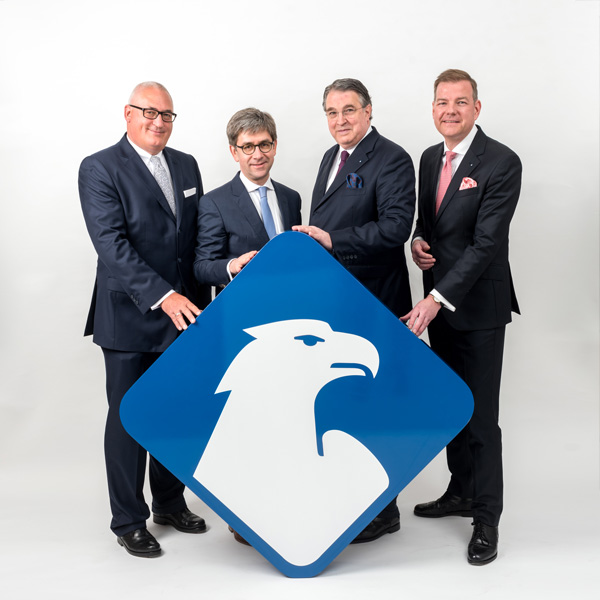 These guys clearly do not look very “techy” and their CVs doesn’t show any deeper involvement with technology. The actual tech guy is supposed to be the guy to the very right. His Linkedin profile shows absolutely zero experience with technology but maybe he is a really fast learner ?

Looking at their products, there is nothing that shows that there is any “tech” behind the offerings. No new products or anything else that looks innovative or unique. In their IPO prospectus they even admit that their claims processes are “Not yet fully digital” which jclearly indicates that these guys are clearly not special.

In their IPO announcement they claim to use “Artificial Intelligence” and this is a link to the 2017 announcement how and what they do with artificial intelligence. The first observation is: They didn’t do it themselves but cooperated with a startup called “MINDS-Medical” who seemts to specialize (as many others tart-ups iin that field”” on reading and interpreting paper documents. The good thing is that they condirm having worked with DFV ,

However 2 other aspects are notable: This seems to have been a one off effort to simplify their product offering and there is no indication that DFV has aquired ANY active knowledge in that respect. Minds-Medical itself is a very early stage start-up that so far has only acquired angel financing and a small sum from a Government funded vehicle.

Interestingly, DFV is not even a true “direct insurer” such as Admiral. In their pre–ipo roadshow thay were boasting that “80%” of their policies are acquired direct which still leaves 20% that they need to sell via traditional channels (brokers, agents).

Interestingly, the biggest shareholder is a guy called Luca Pesarini, who in his main job owns an asset manager and also a broker (Mainfirst), which, coincidently was a joint book runner in the IPO and wrote a glowing research report. My favourit sentence from this report is the following:

VALUATION
As with other InsurTech companies, traditional insurance valuation multiples
cannot be applied to value DFV.

Pesarini has a mixed reputation and according to this WiWo article has owned DFV in his funds at least since 2014.

What I find very interesting is that in the beginning, the Ethna funds seem to have owned the shares and then  somehow, pre IPO  Mr. Pesarini owns the shares personally.

Being part of this “Pesarini ecosystem” clearly helped DFV to achieve its IPO targets although the 12 EUR placment price was significantly below the 17-23 EUR target in their first attempt.

There is the old saying “Even if you put lipstick on a pig, it is still a pig”. In DFV’s case the “pig” is just a relatively ordinary, cuurently loss making insurance company which tries to sell itself as a digital and/or Tech company. To a certain part this was successful, as their current valuation >2 time gross premium, >3 times book value is clearly not achievable by any normal insurance company with this profitability.

Clearly this is not a crime but for me it is also clear that the stock is not interesting at all. Maybe they’ll grow into their valuation at some point in time or not, but I will stay away from this one. So far their growth doesn’t look to be a very value creating exercise. Using normal valuation mutliples for insurance companies, the “intrinsic value” might be only 50% or less of their current valuation, however for a short position the free float is to small and the “Hype machine” around it seems to be quite substantial. And there is little other opportunity to invest into “real” insurtech in public markets.

For investors I think this is an interesting example how relatively ordinary companies try to jump on the “tech bandwaggon”.  I think we will see more of it and one really needs to be carefull not to overpay for these “story stocks”.