After a 4 week break, a new batch of 25 randomly selected German shares. Seven of them I found worth “watching”, although none of them with super high priority. And only 200 more stocks to go 😉

Pfeiffer is a 1.7 bn company that specializes in vacuum technology and especially vacuum pumps. the stock price recovered quickly after the crisis despite a pretty disappointing 2019 and is still within the long term growth path: 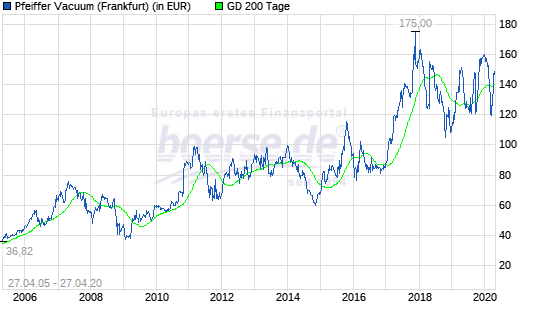 I guess this is due to a majority share purchase from private company Busch Gruppe in 2018 and a speculation on a going private and/or merger. For me, the current valuation of around 40x earnings doesn’t make a lot of sense stand alone in my opinion. “pass”.

Kromi is a 19,9 mn EUR market cap company that specializes in logistics and tools management for producing companies, a little bit like a small Fastenal.

The stock price is somehow strange:

So no movement from 2009 to 2017, a short spike and then down. The spike came from a take over offer of a financial investor in 2017. rising as the company actually showed some positive development. The business as such is quite interesting, because it resembles a little bit a razor/Razorblade model. On the other side, gross margins are low and the clients are metal working companies that are overall in some troubles now. The P&L doesn’t look great but there are a lot of upfront costs included for new clients and they manage to run the business slightly cash positive. Nevertheless a stock to “watch”.

Gigaset is a 40 mn EUR market cap company that initially became famous or infamous as Arques AG, a listedPE company that made money by doing “Badwill acquistions”. Gigaset was the home phone business that Arques acquired from Siemens. These days this is a declining and cash burning business with significant pension liabilities. “Pass”.

USU is a 160 mn EUR market cap IT Service company. The company had a pretty OK 2019 after turning a loss in 2018. At first sight, the company looks little attractive, as margins are quite low. The company is conservatively financed (net cash), but it is not clear to me why they are not able to earn better margins. As there are so many other IT services companies, I’ll “Pass” on USU.

The company was IPOed before the dotcom boom, then peaked in 2001 and”hybernated” for 15 years or so before then climbing again in 2017/2018. The last few year until 2019, the company has shown good top line growth although EPS declined significantly in 2019 from 2018. On the plus side, the company has a conservative balance sheet and profitability was decent over the last few years. A stock to “watch” but not with the highest priority.

Fresenius Medical care is a 22 bn EUR market cap health care company. The main shareholders with 31% of the share capital is Fresenius Group, which itself is also listed.

Fresenius is a leading dialysis provider with the bulk of the business coming from the US. Business seems to stagnate since a few years which can be seen in the share prcie:

Dialysis is unfortunately a illness that comes with Western lifestyles, so their “customer group” is naturally growing. However there seem to be issues in the US with Medicare and Health plans trying to fight against the high costs of these treatments.

As Fresenius itself, the company has significant leverage. Competitor Davita, a Berkshire Holding seems to struggle as well but has done better recently.

Nevertheless, for me this sector is to difficult for me as I would need to dig into the US health sector, Therefore I”ll pass.

Nanongate is a 31 mn EUR market cap company that claims to be a technology company, specializing in plastic surfaces, artificial metals and other stuff.

The company lost ~90% of equity value over the last 3 years which is an indicator that things are not great. The company turned into a loss for the first 6M 2019. They managed to do a capital increase mid 2019 at  ~22 EUR per share before things really went downhill. They seem to be in the end another automobile supplier with the same problems as anyone else plus very little power to earn margins despite the fancy name. “pass”.

Edit: As mentioned by two friendly readers, Nanogate went into insolvency a few weeks ago.

Deutsche Industrie is a 531 mn REIT specializing in industrial buildings and business parks. For some reason the REIT trades at 2x EPRA NAV. “Pass”.

Oppmann is a 19 mn Real Estate company that was the “Mothership” who spun off the sparkling wine business (#439). The company does not release any reports, therefore it is a “pass” for me.

InVision is a 47  mn EUR market cap software company that specializes in HR software. In contrast to other software companies, Invision seems to have some issues: Top line is going down and margins are thin, despite an increase in 2019.

Net income in 2019 was positively impacted by a non-cash tax entry which is not very well explained. The stock price reflects the rather bleak development over the last 6 years:

It is not exactly clear why profitability which was ~30% EBIT margin  in 2014 disappeared almost completely. Maybe the fact that there are a lot of competing HR solutions out there this days ? Anyway, a “pass”.

Gesundheitswelt Chiemgau  is a combined recreational and medical facility located in a very nice setting near the Bavarian mountains with a market cap of 22 mn EUR.

The stock chart is very interesting: 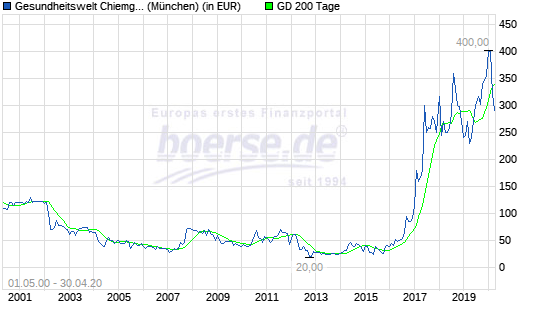 The stock declined over 15 year before 20x bagging between 2017 and 2020. What happened ? As far as I understood, one of the main drivers was the fact that one of the major operating subsidiaries changed its status in 2017 from “non-profit” to profit driven. This seems to have been a major factor in the revaluation. Gesundheitswelt is definitely stock to “watch”.

SMT Scharf is a 38 mn EUR market cap company that produces equipment for the coal mining industry. The company clearly will not be found in any ESG portfolio and also from the business side there were significant headwinds over the last few years:

SMT was a favorite of many German “value investors” because the stock always looked cheap and is now back to levels near the all time low.

SMT Scharf issued a profit warning in 2019 but then ended the year above the initial guidance because of a strong Q4 in their Chinese business. With a PE of 7, the stock is really cheap and the company is still growing. That’s a “watch” for me.

Infineon is a 26.2 bn market cap computer chip producer which was spun of from Siemens in 1999. The business is capital intensive and cyclical, which can be seen in the pretty crazy stock chart: 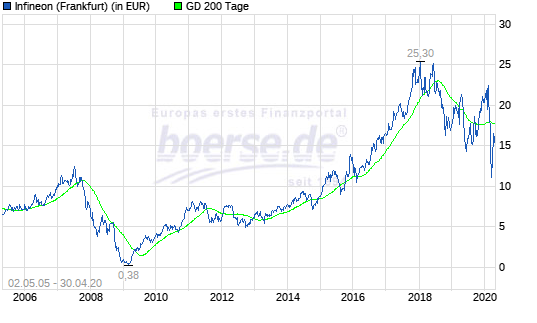 Wacher is a 3.7 bn EUR specialty chemical company that produces chemicals mostly for the construction industry and the  solar industry. Especially the solar business is very cyclical and Wacker had to suffer steep losses which showed in the share price:

Already 2018 was difficult, although they sold the majority of the equally cyclical Siltronic subsidiary already in 2017. On the plus side, the founding family still owns a significant part of the company. Since its IPO in 2006, Wacker couldn’t create long term shareholder value. I guess it could maybe be a very nice cyclical trade, but for me it is a “Pass”.

Norcom is a 22 mn EUR market cap IT company that had specialized on solutions for car amfunacturers which of cours has been an issue. The company tries to diversify into other areas but in 2019 they realized a loss. The company went public in the dot.com boom and after the initial hype nothing happened until early 2018 as we can see in the chart: 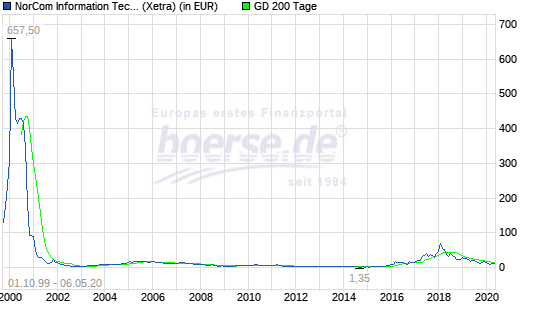 The company tries to reinvent themselves as a “AI Big Data” platform provider.

On the plus side, the founder is still CEO and owns 25%, the company has net cash. On the negative side, 2/3 of sales seem to be with one client and the KgaA structure through which the founder can basically not be removed as CEO despite owning only 25%. as a result, I’ll “pass”.

Datagroup is a 464 market cap company that I haven”t heard about before. It seems to be a IT service provider / consultant which has grown nicely over the past few years. If I understand the business correctly, they seem to focus on “iT infrastructure” and less on application.

The stock price has increased impressively over the last few years and has rebounded already since the crisis : 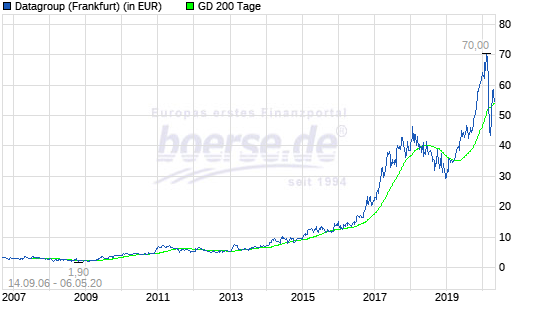 Part of the growth results from acquisitions which also results in quite some financial debt plus some pension liabilities.

With an EV of ~600 mn, EV/EBIT is close to 30x which is expensive for a company with a reasonable high amount of consulting. On the plus side, the founder and CEO still owns 51% of the company. I’ll put them on “watch” but with a lower priority.

Wehn speaking of “hidden Champions”, Rational AG clearly is one of the best examples. This Bavarian company managed to become the global technology leader in professional kitchen ovens that cook with hot steam (Dampfgarer). The coompany is valued at 4.8 bn with only 840 mn of sales which has been driven both, by high margins and ROCEs (26,5% EBIT margins) and growth over many years (EPS +9% 2019).

I owned Rational in the past but sold it early as I thought it was too expensive at around 100 EUR/share. That was an expensive mistake.

The stock looked unstoppable until Covid-19: 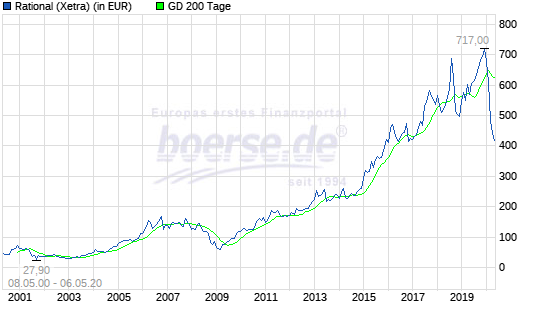 The stock dropped -40% and didn’t rebound. Where is the problem ? Well it is pretty obvious: The customers of Rational are the most hit sectors, restaurants and hotels. When you have no guests, you will not order new equipment. As the stock was superexpensive before, it is still expensive now. Based on 15 EUR/share EPS in 2019, the stock still trades at 28x PE 2019, which is a lot considering the prospects.

Theri latest IR release shows that Q1 saw relatively small declines yoy but new orders tanked by -50 to -60%. Of course this could be recovered by a quick reversal, but the risk is clearly significant.

Rational is clearly a “watch”, however it still looks too expensive for now.

Another one of the infamous German Chinese fraud IPOs. Surprisingly still listed and a 1 mn EUR market cap. “pass”.

LKPF is a 490 mn EUR market cap technology company that focuses as the name says on industrial laser applications. According to their websites, major applications are in the semiconductor industry, automobile and solar. The company had a great year 2019 with top line +18% and EBIT more than doubled. ROCE at 25% looks good aswell with 25%. However already end of 2019, new orders shrank significantly. The long term stock price is quite interesting:

A crazy spike during the dotcom crisis, then an uptick in 2014 and once again end of 2019/2020. Short term, the chart looks interesting as well:

The stock went up 4x between August 2019 and February, then lost 2/3 but gained again almost +100% since the low in March. One driver for the run up until February seems to have been that the company was admitted into the SDAX which is the well performing small cap index of the German stock exchanges.

However I do think that the current valuation of 38x 2019 profit is ambitious, especially as they had a horrible Q1 (sales -50%) with only a relatively small Covid-19 impact. Therefore “pass”.

Albis Leasing is a 57 mn EUR market cap leasing company. Looking at the chart, the company seems to have “flatlined” for quite some time before re-emerging in late 2015.

The company seems to have been in deep trouble in 2013 but manged to restructure somehow. In 2019, there was a (surprise) change both, in management and supervisory board. Overall, the company still produces little earnings from their overall leasing portfolio and the Covid-19 crisis might hit them hard. I am not sure why they trade where they trade at the moment (almost 3x NAV). “pass”.