Back in the good old days (2018) when Venture and Growth investing were still sexy, I looked into the world of “listed Venture Capital”:

Inititally I bought into Kinnevik, Vostok New Ventures (renamed to VNV) and Vostok Emerging Finance (now VEF), however, I sold both Kinnevik and later VNV (at smallish profits) and only held onto VEF. This is how the Group has performed since then (november 2018) (Prices in local currency only, no dividends/Spin-offs):

Unfortunately I could not find continuous comparison charts for VNV and VEF, but almost all of the stocks at first struggled in 2019, only to go bonkers in late 2021 and then crumble in 2022.

Initially I cursed myself for selling too early , but now it looks super smart to only keep one that is a “winner”.

The tale of the two “Vostoks”: Why so different ?

When I looked at the two Vostok  Vehicles back then, both still had a significant Russia exposure which they however managed to get rid off at good valuations before the current issues.

The question is still: Why has the performance differed so much despite the fact that the companies have the same roots ? Per Brilioth, the CEO of VNV is actually still a board member of VEF.

One aspect that I had observed back them when I was able to speak with both of them was, that VNV was more aggressive in risk taking than VEF. This is for instance the 2019 Portfolio of VNV: 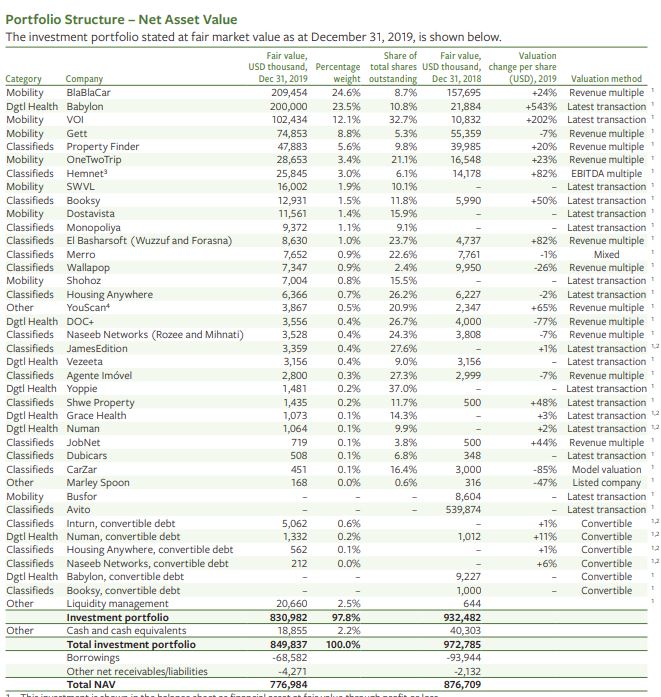 We can see that they had shifted mostly into Mobility and Digital health by that time and that they actually had net debt of almost 10% of NAV. When then Covid hit and especially their mobility holdings got into trouble, they had to issue shares at ~55 SEKs (including a warrant).

In addtion, VNV “ventured” from their original core area of “Market places” into moblity and digital health which they identified as global mega trends.

VEF in comparison by the end of 2019 still had ~15% of its NAV in cash or cash equivalents: 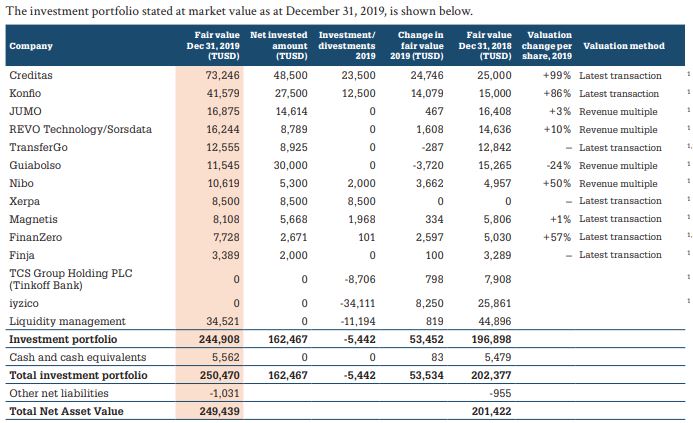 Fast forward to 09/2022 and we can see that for VEF, the big winner was (and still is despite a -50% “haircut”) the Brazilian Fintech Creditas:

Also their second largest Investment, Konfio has done well. VEF has still net cash but clearly less than in 2019. They have been issuing debt and keep buying back shares which clearly makes the construct much riskier.

Looking at VNV, we can see that they still run a net debt position:

We can also see that their 2019 top positions have all been “smoked”. Especially Babylon, which at some point had been the largest position has lost more than 95% after its IPO. What was supposed to be a “positive liquidity event” turned into a nightmare.

What is also interesting is that the three remaining  largest positions of VNV are Mobility companies. Especially for VOI, the Scooter company, many people think that the valuation might not make sense. Listed competitor Bird is trading at an Enterprise Value of 100 mn USD, therefore assuming a 6x higher valuation for VOI  is clearly a stretch. Gett had abandoned a SPAC IPO in March 2022, as a listed company, their value would clearly not be close to 1 billion. It is also interesting that VNV invested a full 48 mn into Gett this year.

Another bombed IPO was Middle East mobility company Swvl which managed to lose an astonishing -99,85% since their SPAC IPO. At the end of 2021, VNV had the inevstment with more than 100 mn USD on their books.

With regard to Babylon, I had always doubts. Back then I had actually the possibility to get some insight into Babylon and the company always looked like “too good to be true” to me. They made a lot of claims on their technology but it was never clear what was actually there and what was only a sleek animation.

Finally, their original market place investments seem to have done reasonably well and allowed them some decent exits, such as Hemnet. This is clearly Hindsight bias, but sticking to market place business models would have been clearly better.

Outside in assessement on VEF vs VNV:

It’s always difficult from to judge the performance from the outside, however the following observations are maybe valid:

Overall, despite the large “discount”, I don’t think that VNV is a must have investment. Many of their holdings are “structurally” challenged. I still would favor VEF over VNV.

VEF for me is a relatively small bet. Intitally I planned to increase the position over time, but for the time being I will watch how things develop.

In my initial 2 posts I completely forgot about a relatively established “asset class” that exists in the UK: Closed end Venture Capital Trusts. Here is an Investopedia post that explains the basics.

Citywire has a list of 39 of these vehicles. In addition, a couple of these funds also run Plc’s that invest into Venture Capital such as Molten Ventures. These vehicles seem to have very “similar” discounts compared to the other listed companies an that space.

Per 30.09. Molten Ventures for instance reported a NAV of 837 Pence per share vs. a share price of ~300 Pence. Again the Performance compared to November 2018 is also not great:

Their investment portfolio is a mixture of direct investments and funds. The reporting is less transparent than for isnatnce Vorstok. For some reason for instance, they do not disclose % ownership stakes in their direct holdings and there is very little info on the “fund of fund” part which is 1/3 of gross portfolio value.

Another listed Vehicle is Chrysalis Investments Plc. I frst heard about them when pip_net from the Doppelgaenger Podcast shorted them because of their Klarna exposure.

Chrysalis reported a 30.09.2022 NAV of 147 Pence vs. a shareprice of ~60 pence, a similar “discount” compared to Molten. The largest position of Chyrsalis is Wefox, a German “Insurtech” that in my opinion has alos a quite doubtful bsuiness model.

Looking at both, Molten Venture and Chrysalis, we can also see that over the last 5 years, they both performed worse than the FTSE 100 which itself was not a great performer:

My gut feeling is that we are still too early in the cycle to go for “bargain hunting”, if at all.

I do think that the track record over the past 4 years of public Venture capital is at best “mixed”. Many vehicles have created only limited value, if they created value at all.

It will be interesting to see how markets react if we indeed see a longer “VC winter” compared to the very brief disruption during Covid.

Maybe it could make sense to look at the sector in one years time again to see if there are some “real” bargains, at the moment I would not be so sure. The perceived discounts might to a large extend be inly timing delays before the valuations of the underlying investments get marked down significantly in the coming months and years.

Overall, I don’t think that “Public Venture” is a very useful construct as it seems to be a lot of “adverse selection”, i.e. the really good deals go to the top funds that don’t need to hassle around with reatil money. So I will abstain from making more investments into such vehicles unless there is a clear bargain/special situation.