The company / the business

Silver Chef is an Australian company which according to the website “delivers equipment funding solutions that help small businesses reach their full potential.”

When I did my “quick check filter”, there were a couple of aspects which I liked a lot:

+ the company is led by the founder who is also the biggest shareholder (~25%)
+ no goodwill, only (strong) organic growth
+ They have share bonus plans for employees, “great place to work” in Australia for many years
+ little analyst coverage, not in an index, almost no international shareholders
+ well written annual reports which clearly explain the business model and all relevant numbers. No or little “adjustments” within the results presentation.

The only 2 negatives at first sight:

– the growth has been funded with the issuance of new shares. However since 2012, the number of shares didn’t rise that much anymore, more or less in line with paid dividends. As I described in an earlier post, due to the franking credits, it could make sense in Australia to pay dividends and issue new share
– the CEO has not participated in the last capital increase

For the clients, this saves upfront capital and reduces risk by contracting only for 1 year. If they choose to buy, they get 75% of their rental expense back. They also have the option of rolling into a cheaper leasing contract.

Silver Chef is actually a “start-up” business collateralized leasing/lending/renting company. Especially in the restaurant area, start-ups (people who want to open a restaurant) are often capital constraint. Other than technology start ups, someone who wants to open a restaurant with little or no capital does not have many places to go to for asking for money.

Offering expensive appliances with just one year lock-up can be attractive, especially when you get “cash back” after a purchase. At least in Germany, I am not aware of a similar offer. You can rent restaurant appliances for events but I haven’t seen any offerings for people who want to start a restaurant.

Opening a restaurant is risky business, many restaurants do not survive the first year. So Silver Chef’s offering really seems to be a very interesting way of keeping the risks manageable.

I don’t think that the business model is so easy to copy. Their business model does have a logistical aspect (reposession, sale of used appliances) and also the operating requirements (weekly cash collection etc). are not so easy to replicate. In the Australian hospitality business, they seem to cooperate with basically every vendor in that sector.

There is also a certain network effect in place, as they can more easily sell reposesssed equipment due to their large client base. Their offer also seems to be very attractive as a niche product between more expensive short-term rentals and more risky long-term leases.

One other competitive advantage is that they lend to businesses few other companies would lend. A “start-up “restaurant” is risky, but I guess after 30 years in the business they do have experience and a vast database.

They do so with very little requirements (1 page application) and a very short decision time (couple of hours) which might be hard to match from many competitors. 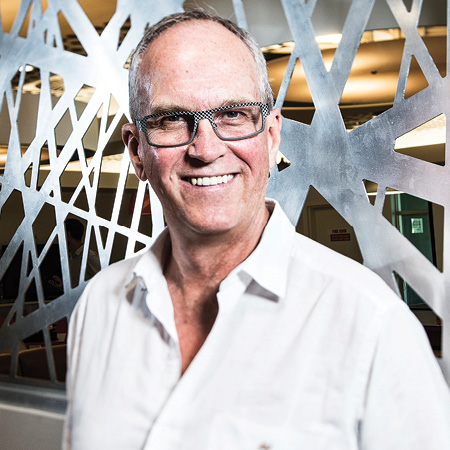 I found an interesting interview with him here. He comes across as a genuinely interesting guy with a mission that is to enable people to start small companies. He even has donated half of his shares into a foundation which supports micro finance in poor countries:

His plan was then to use the dividend streams to fund micro finance programs for some of the world’spoorest entrepreneurs in developingcountries—giving a hand up, nota handout.
In 2010, he formed the English Family Foundation, which he gave 50 per cent of his family shares, making it the largest shareholder in Silver Chef. This move gave employees satisfaction and purpose to be aligned with Allan’s charitable work; the more successful the company became, the more money would go into the foundation, and the more social good that could result.

Many companies talk about being “sustainable and responsible, but in my opinion Silver Chef is one of those companies where this is quite authentic.

Interestingly, Allan English stepped down from the CEO post in 2010, only to return in 2014. I tried to find out more, but i didn’t get that far. English is now 60 years old. This is 5 years younger than Wolfgang Grenke at Grenke Leasing.

Silver Chef’s track record is very impressive as we can see in those 10 year numbers:

All this has been achieved organically, without M&A activity.

What about Future growth opportunities ?

GoGetta seems to a similar story to the original “Silver Chef” offering. Instead of restaurants they target people who for instance want to be self-employed delivery drivers or Uber drivers. I think they occupy an interesting niche between just renting stuff which is flexible but expensive and leasing stuff which is cheaper and less flexible.

GoGetta grew incredibly strong over the last few years. They started it in 2008 from scratch and since then grew like crazy. Business doubled again over the last 3 years. Interestingly, despite growing so quickly, the new business is already very profitable. EBIT margins are at ~19% vs. 26% for the mature core hospitality business which is not bad for the short time they are actually doing this

Silver Chef started in New Zealand in 2012 and Canada in 2014. Both countries show strong growth. Clearly, Canada is the much bigger market than New Zealand. If there business model would work in Canada, then there would be a lot of “growth runway” in front of them. The New Zealand business seems to have been profitable already ~2 years after starting it and the Canadian business had a “cash flow break even” in the first 6 months of 2015/2016.

Compared to Admiral and the insurance business, it seems to be an easier business model to roll out internationally.

Silver Chef is an interesting case. In the 10 years the company is public, it was really a growth story. For some reason, the company was never valued as a growth company. On average, the market valued Silver Chef at around 11 x earnings despite the uninterrupted growth.

Lets look again at the past 10 years:

Compare hat for instance with Grenke:

Investors currently value Grenke at 36x 2015 earnings and ~30 x 2016 earnings vs. Silver Chefs 15 times trailing earnings and ~13x current earnings. Clearly, the higher interest rate level in Australia explains part of the difference in ROE but again, to me there is no real reason why Grenke trades so much higher than Silver Chef other than that it is much more well-known among international investors.

This is clearly not “super cheap”, on the other hand this clearly does not imply a lot of growth going forward. I would rather argue that the growth actually comes for free if you compare it to Grenke for instance.

If we compare Silver Chef for instance with DWS about which I wrote two weeks ago, we can clearly see that Silver Chef is more expensive, but on the other hand, Silver Chef’s margins are not in decline and they grow like crazy organically which clearly is less risky than M&A driven growth. In direct comparison, I don’t think that Silver Chef at the current price is both, the better company as well as the better investment due to the much larger upside.

Why is the stock (relatively) cheap ?

I think that there are several potential factors in play. Clearly, the outlook for the Australian economy is not that great, it seems that many investors think that growth will not last that much longer.. Steven Keen for instance expects 2017 to be the year Australia goes into recession.

Also I guess that many investors are concerned about a further decline in the AUD, after a -35% decline against the USD over the last 3 years or so.For me as an EUR based investor, this is clearly a risk but also a potential diversification opportunity. Looking at Australia from a EUR perspective, I would not want to go short AUD vs. EUR over the long-term. I do like the fact that there is some natural hedge between the hospitality business in Australia and a lower AUD.

I also think that Silver Chef is not a company which performs particularly well in a scoring model, as it carries a relatively high amount of debt and at first sight was always Free Cash flow negative. Based on EV/EBIT (magic formula) for instance the company looks expensive, as many other financial services companies do. Also the high P/B ratio will scare away many book value oriented investors.

Although I am not a chartist, the stock chart also looks a little bit like it lost momentum over the last few years, especially when you compare it to a “Momentum superstar” like Grenke who goes from top to top: 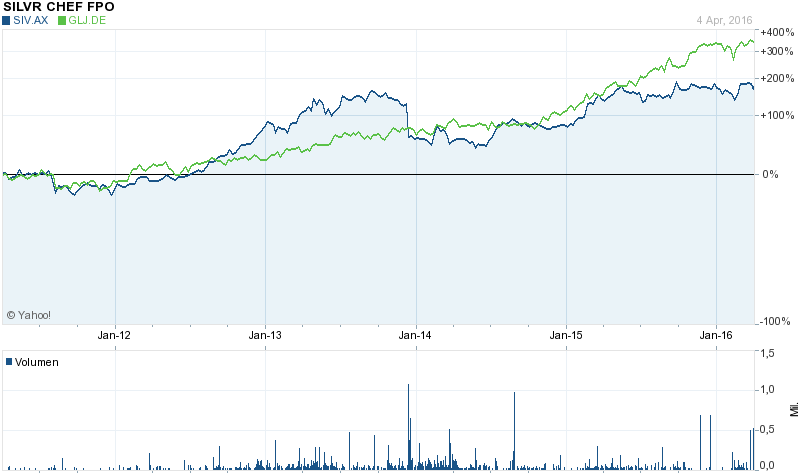 Also, I think maybe with the exception of Grenke, financial services companies still have the “stigma” from the financial crisis that they are dangerous businesses and need to be valued differently (i.e. lower) than “Normal” businesses.

Finally, one could also argue that Silver Chef is more risky because they lend (or rent) to relatively risky customers. They do have higher write-offs than other financial companies. According to their last presentation, annualized writ-offs are currently at around 3% annualized relative to total assets compared to for instance Grenke at around 1,7% for 2015. On the other hand, margins seem to be high enough to compensate for that and from a leverage perspective, they are relatively conservatively financed. With an 31% equity ratio they have almost twice as much equity compared to Grenke with 17%. So taking into account the balance sheet I would say that Silver Chef is not clearly riskier than Grenke.

Silver Chef to me looks like a very interesting company, maybe similar to Grenke a couple of years ago. They seem to have an interesting business model, occupying a niche between pure rental and leasing, which is not that easy to copy successfully. They expanded their business model within Australia into other sectors and now  go international.

If they are succesful, this would mean that there is would be a lot of “growth runway” in the future. Compared to DWS, the Australian IT consultant, I would rank Silver Chef clearly before DWS.

I also like that the company and the CEO approach things “differently” to a certain extent than other companies, both by offering a rather unique product as well as having a “Mission” to support entrepreneurs.

Within my investment categories; i do think Silver Chef is a company similar to Admiral, Thermador or Handelsbanken. A company which does things differently which up until now lead them to great success. Even if they grow slower than in the past, at current prices the company still has a lot of upside.

I will therefore allocate a first 2% position at 9,80 AUD/share into Silver Chef. As this is my first Australian investment, I think it makes sense to start very carefully, as I might have missed one aspect or another.