As some readers might remember, I bought shares of Greenlight Re, the Bermuda Reinsurer with investment advise from David Einhorn back in December 2015, but then sold them one month later, triggered by the insight that I don’t really understand his investment criteria. Looking back, the decision to sell doesn’t look very smart, as the stock priced since then increased by around 18% in USD (or 14% in EUR). YTD the stock is up 14,8% in USD.

In early August, Greenlight Re filed their 6M report. Interestingly the NAV per share declined by -4% from 22.20 USD to 21,32 USD per share.

So what actually happened was actually a simple multiple expansion, from ~0,8 at the time of my initial post to “at book” at the moment. I am not sure why this happened, especially taking into account their recent strategy shift towards US mortgage insurance.

For the time being, it looks like that I have been wrong and right at the same time.

The so-called “Atom Kommision” actually came up with a compromise that the utilities could buy themselves out of the potential risk for the final storage of radioactive waste by paying ~23 bn EUR, which represents a relatively modest 35% premium of 6 bn EUR on top of the 17 bn reserved by the industry for that purpose, which would cover all risks including interest rates,

On the other hand however, they also made clear that a spin-off of the nuclear activities (and potential bankruptcy) will not be that easy. They actually communicated that all spin-offs after June 1st will automatically be subject to “Nachhaftung”, which of course specifically targets the Uniper spin-off.

So honestly, not that much has changed for the utilities, as the actually decommissioning of the nuclear plants still remains with the utilities. I also find it hard to imagine from where all that cash for the fund should come from.

Uniper showed a 3,9 bn EUR loss for the first 6 months which translated into an 3 bn loss for E.on, mostly because of the well-known general issue in the German electricity market.

In the German press one can find speculation that E.On might need a capital increase after the Uniper “spin-off” due to the fact that Uniper might trade a lot lower than the implicit valuation on E.On’s balance sheet. As I have mentioned in the past, the problem with the Uniper spin-off is mainly that it is no full spin-off, as E.On wanted to retain slightly less than half of Uniper in order to sell the rest for cash. E.On has actually included this in their 6 month report (p.20) quite explicitly, including the fact that the haven’t recognized the 35% premium in their accounts yet which might be another 1 bn or so in in losses.

So it is no surprise (to me) that E.On didn’t perform very well and Einhorn most likely lost money on the stock. What I found surprising however is that RWE, the other big German utility outperformed E.On by a wide margin as we can see in the chart: 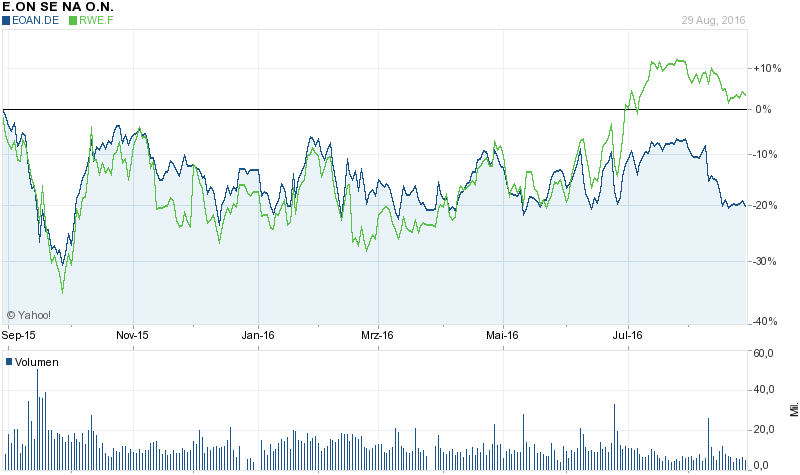 So the better instrument to play the nuclear deal would clearly have been RWE (so far).

I can only speculate why RWE did so much better. My guess is that the strategy of RWE to spin-off the good ship (Innogy) does seem to work better. They don’t run the risk of additional write-offs and it looks like a better separation of “good and bad” ship than the E.On strategy.

In my informal score keeping against Einhorn I would rate myself now at 4:0  (Delta Lloyd, AerCap, Consol, E.On), although with E.On the “final verdict” is still open. On the other hand, Einhorn is still a billionaire and I am not, so he seems to do a lot of things (much) better than I do…..