How to invest into Venture Capital – Listed Vehicles (part 1)

One upfront remark: I do not recommend to invest in Venture Capital right now. The market is clearly overheated and the asset class is known to be very volatile although Warren Buffett’s Todd Combs seems to just have discovered Fintechs.

This post is ment as a “long-term perspective” view on the sector and not a buy recommendation in the current environment.

How to invest into Venture Capital as a Private Investor

Venture Capital, i.e. the industry funding (technology) start-ups is known that almost everything depends on relationships.

It is no secret that a few funds like Sequoia or Kleiner Perkins have produced outstanding returns but these funds are “invitation only”, there are little chances even for larger institutions to invest in them and for individuals without direct connections it is more or less impossible to get in.

One remark with regard to the “famous” VC funds: The reason why they are successful is often not just “picking the right one”. The really good ones are very active investors that help their companies in many ways. From opening doors to actually hiring experienced managers for growth etc. etc.  This is why the presence of a famous VC is often (but not always) the start of a virtues cycle: The VC lends credibility (and know how) to the start-up, the start-up becomes successful and the famous VC becomes more famous.

There are already some market places that offer investments in start-ups. In general they can be divided into 2 types:

The big problem with all theses services is the following: All the public available services do inherently contain a strong “negative selection” bias.

Almost all founders try to get into “famous” funds as I described above, this has many very positive aspects. There is absolutely no reason to choose not to bring a great VC on board if you can.

I would also recommend not to invest in general in anything within your circle of friends or friends of friends (unless they are professional VCs). Money and friendship in my opinion should be held separately. As both companies have been invested in the same start-ups, it was relatively easy to compare:

Kinnevik has long put more conservative valuations on firms it jointly holds with Rocket. On Wednesday, it cut its NAV figure for furniture site Home24, while lifting the number for other ecommerce businesses Westwing, Linio and Lazada.

However, Kinnevik’s valuations for Home24, Westwing and Linio are still well below those given by Rocket as of March 31

So what is the alternative —> Listed Vehicles ?

Again, within the “Listed” section of the stock market one has two options:

With regard to the direct path I would again be very cautious: As mentioned above, companies that go public very early are almost always “anti selected”. Like the Creditshelf example, many of these companies try to capitalize on a specific hype and are often extremely expensive compared to their non-listed peers. Additionally, future funding rounds are much more difficult to manage in a stock market environment.

This leaves us with listed companies that themselves invest into start-up companies.

Here is a list of Listed companies that I consider “Venture Capital” companies:

I covered Softbank a few months ago with two posts (part 1, part 2). My  final take away about the company was as follows:

At the end of the day, I think there might be some upside at the current level of the share price but not enough to fully compensate for the risk. So no investment unless it would turn out that the tax issue isn’t an issue at all.

Softbank is clearly doing things differently, however it is quite risky (lots of leverage) and some of the investments look outright stupid like investing 375 mn USD into “Robo Pizza”.

I wrote about Kinnevik in December last year and started to build up a position last month. For me, Kinnevik is a combination of long-term investor / incubator /VC with a stellar reputation in the market. I consider the Governance to be very good and think that they are a very interesting long term play, despite their current large exposure to a single company (Zalando, which however in my opinion is a very good company).

One thing to watch is that Christine Stenbeck, the heir of the dominant founding family seems to sell some of her Family’s shares lately.

Rocket Internet is something like the German Version of Kinnevik, run by the Samwer brothers who made their name with copying business models from the US and rolling them out in high-speed across the globe.

Shareholders who bought the shares at the IPO price of 42,50 EUR are still down a considerable amount despite a rebound this year:

Although Rocket “pivoted” from an incubator to a more traditional VC model some time ago, I still doubt if they stock will ever reach its IPO price.

Interestingly, Rocket and Kinnevik were very close as Kinnevik believed in the future of E-Commerce and Rocket incubated a lot of promising E-Commerce companies including Zalando. Kinnevik actually was a shareholder in Rocket but sold the shares in early 2017.

Why did I not look at Rocket in more detail ? The biggest issue for Rocket in my opinion is that they have burned their reputation significantly over the past few years. There is no doubt that they incubated really good companies, however they also have burned through a lot of unfortunate ones. For instance this story in FT Alphaville is quite telling and there is no lack of stories of founders/employees who claim to have been screwed by the Samwers.

As reputation is almost everything in this business, this also means that Rocket will not have access to the best companies as they will surely avoid Rocket for some time to come. Racket also has to prove that they can do other things than E-Commerce.

Rocket has also a history of valuing its participations much more aggressively than for instance Kinnevik.

German Startup Group is a tiny listed VC company which invests as the name says in German start-ups. Looking at the performance since their IPO in 2015, we can see that they did even worse than Rocket: 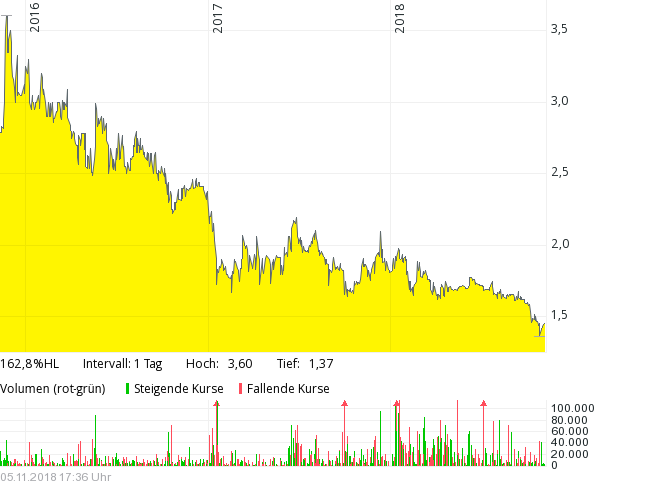 My impression (without a very deep analysis) is that German Startups is not a value add VC but rather a “spray and pray” kind of investor. They invest more or less randomly across sectors. In their last interim report interestingly they announced a strategy shift from VC investor to a kind of VC asset manager /platform.

In principle, this sounds quite interesting, but I am not sure if they can actually pull this off. They already needed to issue debt earlier this year as they have very little liquidity and the investors clearly have doubts.