New year, same series. This time the 25 stocks contain 5 watch list candidates. At 200 stocks I have managed now to cover already 25% of the universe.

Puma SE, the iconic German sportswear brand founded by the brother of Adi Dassler (Adidas) is a very interesting case. The now 10 bn EUR market company was one of the real hot growth stocks in the 90ies early 2000s, then nothing happened for a long time as we can see in the chart: 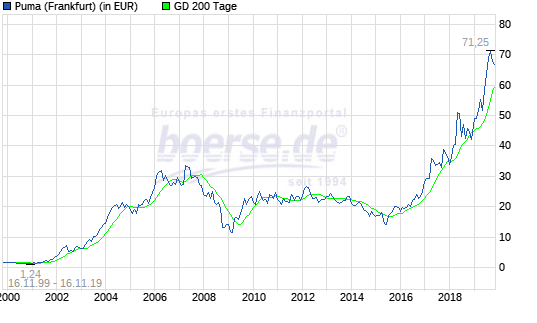 Then, suddenly, over the last 2-3 years, the stock suddenly trippled. What happened ? In 2007, Pinault Printemps (PPR now Kering), the French Luxury company took over the majority for then 330 EUR/share. That is split adjusted around 33 EUR. However Puma was not a good fit and didn’t really develop well under Kering’s ownership. In 2018 then, Kering formally spun off the Puma shares to its shareholders and Puma was back on its own. The stock had moved already before this event. The company has been growing nicely in 2018 (Topline plus double digits, net incom +30%), but the current valuation is ambitious.Although the first 9 months 2019 have shown even better growth, I would not buy at the current valuation. However Puma is clearly a missed spin-off opportunity. I will keep the stock on “watch”.

A 10 mn EUR market cap stock that I have never heard of. The company IPOed 2015 in Paris and claims to be a leading “digital music rights” company. Based on their IR site, they seemed to have sold their main asset and withdrew from the Paris stock exchange although they remain listed in Germany.

There are no reasonable reports available, the company seems to have gone “dark”. Maybe something for specialists, but a “pass” for me.

Indus Holding is one of the “oldest” listed “private equity” holding companies. The 900 mn EUR market company exists since 1995 and invests into majority stakes of typical “German Mittelstand” companies. They run the companies seperately, i.e. do not consolidate them operationally into one Group.

Looking at the chart however, the long term value creation doesn’t seem to be gigantic:

Q3 2019 showed relatively disappointing results, driven by a weakness in their automotive supplier companies. The 2018 annual report shows that despite increasing top line, margins are in a decline since 2016. The stock is not expensive, but at the moment their portfolio clearly is in some trouble. “Pass”.

SHW is a 130 mn EUR market cap automotive supplier. The main products seem to be geared to combustion engines which might explain that the stock price is now below the IPO price from 2011:

The Austrian Group Pierer seems to own a majority of SHW (75% according to this article).  The first 6 months 2019 show a significant improvement against 2018 but that is not reflected in the share price. Nevertheless not interesting for me. “pass”

Lanxess is a 2005 Spin-off from Bayer AG and has a market cap of ~5.6 bn EUR. If I am not comletely worng, Lanxess is also the only German stock where Warren Buffett owns a sizable stake, in this case 5% that he bought since 2017.

The company is a specialty chemicals producer and the stock price has been doing good from the spin-off but not great: 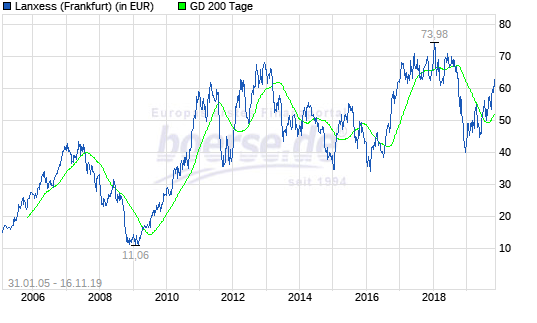 The comapny is doing Ok at the moment, although their exposure to automotive clearly shows in the Q3 results.

So why has Buffet invested ? Thisis hard to know but Buffett likes specialty chemicals (Lubrizol), the company is buying back stocks on an ongoing basis and the new CEO seems to be an active capital allocator. ALthough I do not know the business well, I will put Lanxess on “watch”.

However the stock is in my opinion only interesting for squeeze out specialists. For me it is a “pass”.

261 EUR market cap technology company. Looking at the stock price one can see a longterm upwards trend, however with a crazy spike in 2018:

I guess this had to do with a very positive development in 2018, where profits had trippled and top line increased by 30% or so driven through their industrial glue segment.

The first 9 months in FY 2019 however show a different picture. Sales decreased by -9% and profits declined by -30%. Management communication seems to be not great but still the technology seems to be good, otherwise they would  not be able to generate 15% EBIT margins. A candidate for my “watch” list.

Steico is a 352 mn EUR market cap supplier to the construction sector. The company IPO’ed into the 2007 boom market and then almost went under in 2009 with shareprices below 1 EUR:

Steico specializies in “organic” wood based insulation materials. The company is currently growing with double digits in topline and even +40% in earnings. However I personally feal uneasy about the negative interest rate fueled construction boom especially in Germany and “pass” on this stock.

Softing is a 75 mn EUR market cap comapny specializing in hard and software for communictaion within prodcuatuion environments. The company has been IPOed during the dotcom boom end 90s early 00s, tnaked, hibernated for a long time but then resurfaced as we can see in the chart:

Following the financial crisis, the company could grow strongly from 2011 on and with a small delay, the share price went up significantly. However in 2017, sales and profits dropped again, before recovering somewhat in 2018. 2019 seems to be looking OK so far. However margins are lrelatively small for a “tech” company. Still a candidate to “watch” but with low priority.

Sparta AG for a long time has been a very smart run “special situations” investor with very good management. For some reasons unknown to me however, Deutsche Balaton, a similar company managed to take over the majority and the old management left. The 69 mn EUR market holding company now has a very different investment style, with the largest positions being rather speculative. For some reason, the company did a (discounted) capital increase in summer without actually needing to do so. “Pass” for obvious reasons.

RCM is a 23 mn EUR market cap holding company that manages a real estate portfolio with the focus on the city Dresden. Market cap pretty much equals book value of equity. “pass”.

GBK, a 55 mn market cap company, specalizes in investing into “Mittelstand” company in the DACH region. The company seems to do only small minority investments (with one exception) and the portfolio is a pretty mixed bag from meat and food producer to automotive suppliers and robotics companies. Market cap seems to be pretty close to NAV. “Pass”

Munich Re is the 37 bn market cap global leader in reinsurance. After the vicious drop in 2008/2009, the stock has recovered well and especially in the last few month the perfomance was wvery good: 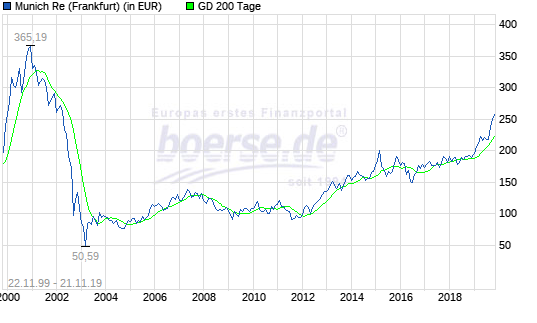 With a P/E of around 12 and a dividend yield of ~4,6%, the stock still looks cheap and clearly will attract yield hungry investors. For me, the sector and the company is too difficult. “pass”.

Software AG is, as the name indicates a software company with a 2,2 bn EUR market cap. Software AG has a suit of products, among other a database solution called Adabas and other stuff that I don’t fully understand.

The long term stock chart shows some volatility. Especially after the IPO in 1999 the chart looks like a typical dotcom chart: 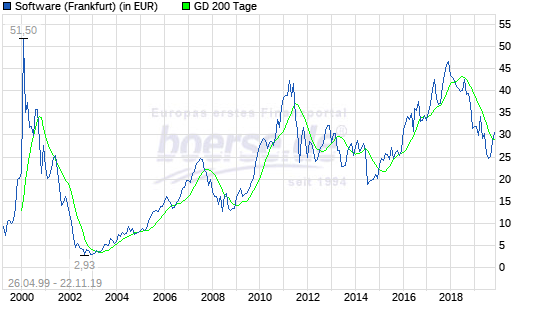 Looking at the last 9M report, clearly the high growth times are over, however the company is very profitable  (EBIT margin 23%-24%)  and the company has net cash. Software AG has a new CEO since a little bit more than one year who seems to try to change the startegy towards more growth. A candidate for my “watch” list.

Fresenius is a 27 bn healthcare company, which among others runs the largest private hospital chain in Germany and also is the majority owner of Fresenius Medical Care, one of the world leaders in dialysis. The complicated legal name “SE & Co KGaA” is a s pecific structure where public shareholders have only very limited rights.

The company is controlled by the foundation of the founding family . The 9M report shows a solid development, however little growth and profitability increases only on an adjusted basis after tripling profits between 2010 and 2018. The company carries a significant amount of debt (>20 bn). However for me Fresenius is much too hard to understand, so “pass”.

Viscom is a 81 mn EUR technology company that specializes in manufacturing equipment that allows inspection of a diverse range of products via XRay or other technologies (images etc.). The company showed very nice growth in 2017, ok growth in 2018 but in the first 9 months of 2019 sales have been shrinking and profits disappeared.

EBIT was already in decline in 2018 and evaporated in the first 9M 2019. The stock price mirrors this development: 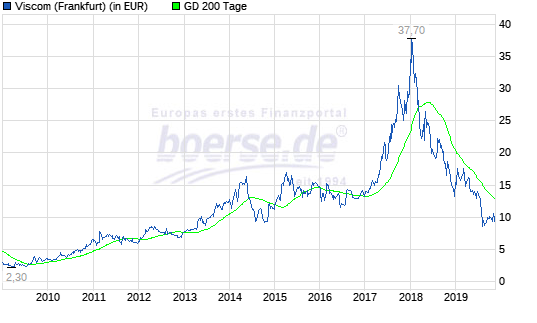 The company seems to be dependent on the car industry which seems to lower and/or cancel orders. Plus, they seem to have increased production capacity (with debt financing) just as the downturn is hitting them. “Pass”.

Infas is a 33 mn market cap market research company, similar to GfK (now delisted) or Nielsen, just smaller and focused on Germany. I would say classic market research is clearly in decline as there is now so much information online and calling people for 60 minute interviews is maybe never coming back.  Nevertheless Infas has doing relatively Ok over the last few years and sales and profits increased since 2015 when they showed a loss.

However in the first 6 months of 2019 they showed double digit growth but strongly decreasing profits and a negative comprehensive income. Some of this is driven by the pension liabilites, but it is not really clear why the result dropped so much.

However, the company is financially solid (14 mn Cash) so I will put them on “watch”.

Patrizia is a 1.6 bn market cap real estate company. The company almost went under in 2009/2010 but recovered nicely and is clearly riding the German real estate boom. Patrizia invests directly into real estate but is also a RE asset manager.  The founder and CEO holds 51% of the shares. However the business model and the financial statements are much too complex for me. The 9M 2019 statement for instance sounds good until you actually reach teh bottom line where profit is -23%. “Pass”

169 mn market cap “Mittelstandsholding” that is pretty actively buying companies. Most of the companies are not very profitable and lead to “bargain purchase” gains on closing.  Mutares claoims to be a trunaround specialist. With STS Group AG they had a partial exit via an IPO last year but since the IPO the stock lost -80%.  Competitor Aurelius showed that such a business model can work, however for me this is a company to “Pass” on.

Some kind of Crypto thing with a 5 mn EUR market cap. Pass.

Bilfinger is a 1.4 bn market cap company that I had written about in the blog 5 years ago. Once, one of the highest regarded companies, the strategy shift under the old CEO led to a pretty hard life since then as a “industrial service company”. The stock price actually hit a new decade low this year:

However, looking at the 9M presentation, not a lot has changed. The company continues to struggle and compared to their earnings power, the stock price is still high. “pass”.