No bonus this time, only 10 Stocks in this post. Spoiler: none of the 10 stocks went onto the watch list.

Another interesting story that caught my attention is this one: The Swiss Exchange finally opens up to SPAC listings. It’s about time to catch the last wave of this hype. The Swiss seem to be unhappy with the large share of (expensive) quality companies listed right now.

Valiant is a 1,4 bn CHF market cap Bank Holding company. As with all other Swiss banks, the company seems to stagnate since a long time. “pass”.

Galenica is a 3,4 bn CHF market cap company that calls itself the “leading Swiss Healthcae Platform”. The company IPOes in april 2017 and has performed decently since then:

As part of the platform, Galenica runs pharmacies in Switzerland but alos manufactures certain OTC Pharmaceuticals, Vitamines and beauty products. More than 50% of slaes are low margin logistics services. The company grows at low single digits and is only active in Switzerland. The PE of around 20 is not so high, but somehow I don’t see a lot of upsidehere. “Pass”.

ALSO is a 3,8 bn CHF market cap wholeseller to the Information and Telecommunication Industry (ICT)). This looks like a very boring but a look at the share price shows that they seem to do something right, especially in the last few years:

Also is majority owned by the German Droege Group which to my knowledge used to be a consulting company but now also is a PE investor. Looking at the Droege site, one sees a lot of buzzwords like Cybersecurity, 3D Printing an cloud. Droege seems to be involved since 2011 and until 2018, not mauch happened before profits and share price increased significantly over the last 2-3 years. As a wholeseller, margins ar thin but ROCE looks helathy at 20%+. Nevertheless, not my preferred area of interest, therefore I’ll “pass”.

Alreal is a 3,3 bn CHF market cap company that owns and develops commercial real estate in Switzerland. The long term track record seems to be quite good but still, as all real estate companies it is a “pass”.

Georg Fischer is a 5,9 bn CHF market cap company that is producing machinery as well as components (castings, pipes ect.) for various industries.

Within the Group, it looks like that Piping is the star performer with double digit EBIT margins and 20-30% ROCE whereas the other two dvisions are not so good:

However following the recent run up in the share price, Fischer is not cheap:

Just doubling the 6M profit, Fischer trades at around 30x PE. This level is almost normal for Swiss companies, but I think for a PE of 30 there are better opportunities available, although the Piping division standalone woudl be extremely attractive. Nevertheless, I’ll “pass”.

Burkhalter is a 405 mn CHF market cap company that is mainyl active in constructione related electrical installations in Switzerland. The bsuienss looks like a typicall lower margin service business, however with a relatively low net capital requirement. The company saw a decline in 2020, but the first 6M in 2021 look already better than 2019

Looking at the chart we can see that Burkhalter was a slow and setady grower until 2017 and since then the stock declined significantly.

Looking into the 2018 annual report, we can see that the business had been stagnating for some time already and profitability then dropped in 2018: 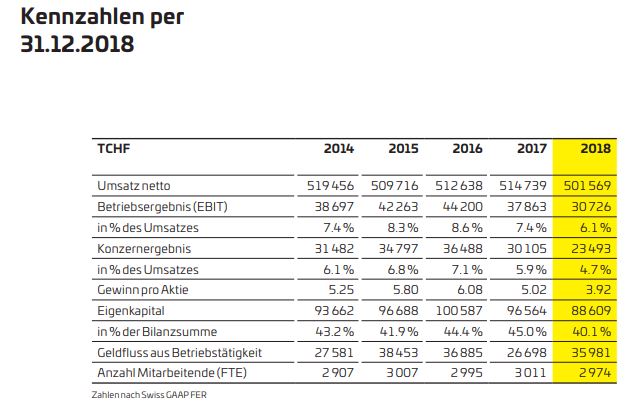 it seems that until 2017, they had a special large project that made them a lot of money but then fell away. Compared to Meier & Tobler, this looks a lot less interesting, therfore I’ll “pass”.

Tecan is a 7,2 bn CHF market cap manufacturer of labarotory automation equipment. The company has been growing 5-10% p.a. over the past 5 years with a addtional booster in 2020 driven by Covid-testing equipment. Margins are decent at around 15% EBIT. 6M 2021 looks even better, with sales up +50% yoy and EBIT margins of 20%

This has not been unnoticed by the stock market as we can see in the chart:

At the current share price, the company is valued at 36x 2021 earnings which is quite rich, the current profitability might also be “abnormally high”. It is also interesting to see that it took also 17 years or so to surpass the 2001 peak in the share price. The company doesn’t seem to have any dominating shareholders

In principle, this is a very interesting company, but outside my circle of competence. “Pass”.

GAM is a 211 mn USD market cap asset manager. At a first glance, the stock looks dirt cheap. According to the 6 month report, they have 250 mn in nat cash and around 35 bn AuM. However looking at the chart, it looks like a “broken” stock:

There seems to have been a big scandal however in the recent years, having something to do with the Greensill fraud case. There seems to be a lot going on in this company as outlined in this longer post.

Despite all the restructurings, GAM failed to make a profit in the first 6M which is remarkable as capital markets were very good. It seems that they need to pay high salaries in order to retain staff,

Overall this seems a very tough nut to crack. If i would have more time, it could be interesting to ddep dive as a “hard value” case but for the time being, I’ll “pass”.

Idorsia is a 3 bn CHF market cap company that, surprise, surpise has been shortly part of my portfolio. I got into Idorsia via my Actelion Special situation investment. I sold Idorsia pretty soon at 14 CHF per share. In betweenm the stock traded up to almost 30 CHF but came down to arounfd 17 CHF right now.

Idorsia is clearly interesting due to the involvement of the Actelion founder Jean-Paul Glozel, however the company is burning money like crazy and just issued a 600mn bond. As I am not a  Biotech guy, I’ll “Pass”.

Castle Alternative Invest is a 72 mn CHF market cap investment holding that invests into alternative assets. The company seems to be in Liquidation. Not a surprise as the long term chart looks ugly. It seems that the company trades at a small discount to the Cash NAV and the liquidation seems to occur soon, however I do not know how this would look from a taxation side (Withholding taxes etc.). “Pass”.