Synchrony Financial (SYF) – a Spin-off that is better than its Parent GE ?

While looking at General Electric some days ago, I remembered that I had the IPO/Spin-off GE Capital Credit Cards which is now Synchrony Financial on my research list for quite some time.

This is from the 2016 annual report explaining how Synchrony was separated from GE:

The Company was previously an indirectly wholly-owned subsidiary of General Electric Capital Corporation (“GECC”) until the closing of the initial public offering of our common stock (“IPO”) in 2014, which reduced GECC’s ownership in the Company to approximately 84.6% of our common stock. In November 2015, Synchrony
Financial became a stand-alone savings and loan holding company following the completion of GE’s exchange offer, in which GE exchanged shares of GE common stock for all the remaining shares of our common stock it owned (the “Separation”)

Back then in 2014, Jeff Immelt thought that in order to increase the share price of GE, it is better to dispose as much of the financial business of GE as possible and concentrate on the industrial business. Looking at the stock charts, so far it doesn’t look like such a great idea as Synchrony has done a lot better than both, GE and the S&P 500 (Synchrony in blue): 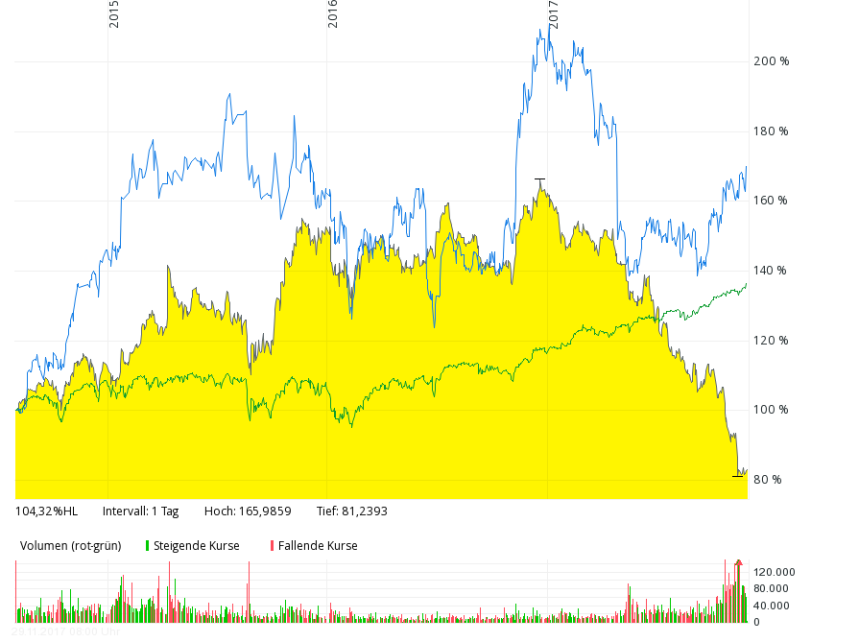 The business model is nicely explained in the annual report:

“Our business benefits from longstanding and collaborative relationships with our partners, including some of the  nation’s leading retailers and manufacturers with well-known consumer brands, such as Lowe’s, Walmart, Amazon and Ashley Furniture HomeStore. We believe our partner-centric business model has been successful because it aligns our interests with those of our partners and provides substantial value to both our partners and our customers. Our partners promote our credit products because they generate increased sales and strengthen customer loyalty. Our customers benefit from instant access to credit, discounts and promotional offers. We seek to differentiate ourselves through deep partner integration and our extensive marketing expertise. “

Synchrony offers credit cards in the form of so-called “store cards”: These are credit cards which can be used in certain stores only. The advantage for the stores is that they don’t have to pay the typical credit card fees on each purchase which are usually around 2-3% for normal credit cards. On top of that, the stores even participate in the money made from extending credit to consumers who pay for the card.

For many retailers with razor-sharp margins, not paying credit card fees has a significant impact on the bottom line and so they are happy to promote those cards as much as possible by offering discounts on their merchandise which then again in theory should attract customers to use those cards.

So this is a very different business model to Amex (or Visa or Mastercard):  For instance, Amex tries to win customers by offering significant rewards for using the card but the stores accepting Amex have to pay for those rewards by the significant fee Amex pays on each purchase. An additional advantage for the stores lies in the fact that they gain access to all the data from the store card whereas they have zero access to the data of normal credit cards.

The disadvantage for a store card provider like Synchrony is clearly that they have to live off interest charged for the actual credit only. There is no transaction fee income like for instance at Amex or Visa or Mastercard.

There is a much better comparison of the business models at Punchcard Blog, I highly recommend to read it.

If we compare 2016 with 2013 (last year under full GE control), top line growth was quite nice but bottom line growth was almost non-existent. What looks especially bad is the fact that Return on assets decreased significantly. However this is a result of a much larger capital requirement as stand-alone company. During GE, the business had only minimal capital and benefited from the strong GE rating.

Cost of debt clearly increased since the separation. Synchrony is now a BBB- credit and needs to pay up. We can also see that the amount of credit losses has been increasing.

However this si not a Synchrony specific problem but a problem in the US in general as this graphs show:

Longterm it looks like that there is still room for things to get worse.

Synchrony’s store cards contain a significant amount of “sub prime” credit and loss rates are in general “above average” for US credit card companies.

So this is clearly an issue to watch out if and how delinquencies in the US develop.

As always I do a Pro and Con summary from my side at this stage:

So all in all a lot of fundamental pro’s vs. a few con’s.

If we look at their customer list, the largest 5 account for 54% of their business. 2 of the 5 are actually Walmart. So I would assume that Walmart really is the biggest client with a significant percentage of their business:

As I like to keep things simple, therefore my valuation model looks also quite simple.  For me a P/E of 15 would be a long-term “fair” P/E for a company like Synchrony which I would consider a “quality financial” firm. With a current P/E of around 14,4, there is little room for multiple expansion.

So any return needs to come from growth. They seem to be able to grow the topline by around 9-10% growth but so far this has not flown to the bottom line. If losses do not deteriorate much further, top line growth should translate into bottom line growth as some point in time. As a financial company, growth requires profit retention, so my total expected return going forward would be the growth rate (9-10%) plus the dividend yield which is currently 1,6% plus maybe some share count reduction. Overall this results in something like a 10-12% return per annum which for me is unfortunately not enough, especially compared to the risk of further deteriorating credit quality.

For me,  Synchrony would be more interesting at a price of around 30 USD (all other things equal).

Synchrony Financial is an interesting company. They have a good business model and seem to be well-managed. On the other hand there are also fundamental headwinds like increasing default rates and reliance on a few big customers.

For me the stock at the moment looks too expensive. If for some reason the price would come down 20% or so I would be a buyer.