Argentina or how to adjust for Nationalization risk (Cresud edition)

And now to something completely different…

The story of the seizure of YPF, the Argentinian subsidiary of Repsol was on the news everywhere.

Accounting “Uber-guru” Aswath Damodaran had a great piece up yesterday about how to reflect Sovereign risk. He openly admits, not to have though too much about this issue before.

He brings up several possibilities to reflect this risk in intrinsic valuation, which are:

Option 1- Use a “higher required return or discount rate”:
Option 2: Reduce your “expected cash flows for risk of nationalization:

Intuitively I would also prefer option 3).

So let’s look at a real world example: Cresud

Cresud is an Argentinian company which according to Bloomberg

As one of the few “pure” agricultural plays and has traded ADRs, Cresud is a favourite of some very well known value investors like Fairfax and Monish Pabrai.

Now we can see what Damodoran described in “real world action”:

One US ADR reperesents 10 Argentinian shares.

If we look at the historical spread graph, we see that with the exception of the panic in 2008, the ADRs tracked the stock pretty well, so the current divergence definitley reflects Nationalization risk. 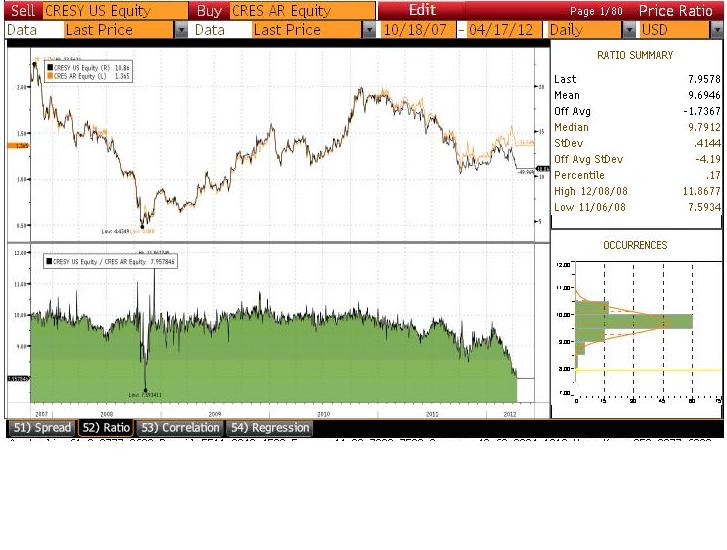 I have no idea if Cresud is in danger of being nationalised and if it is an interesting “special situation”, but it is still interesting to see how this one will turn out.

In the discussion to the Piquadro valuation, I quickly mentioned that the concept of “risk free” rates is a difficult concept at the moment.

Let’s have a quick look at the “academical” world:

If we look at the CAPM (no matter if one beliefs this or not) we can see that the risk free rate of return plays an important role there. First, it is the basis return on needs to achieve with any investment, secondly it also influences the equity risk premium.

The definition of the risk free rate itself is quite “fishy”. Investopedia for example states:

Investopedia explains ‘Risk-Free Rate Of Return’
In theory, the risk-free rate is the minimum return an investor expects for any investment because he or she will not accept additional risk unless the potential rate of return is greater than the risk-free rate.

In practice, however, the risk-free rate does not exist because even the safest investments carry a very small amount of risk. Thus, the interest rate on a three-month U.S. Treasury bill is often used as the risk-free rate.

This is of course not really applicable for any serious long term investor. Damodaran has a nice paper about “risk free rates” here.

His major points are as follows:

The first is that there can be no default risk. Essentially, this rules out any security issued by a private firm, since even the largest and safest firms have some measure of default risk. The only securities that have a chance of being risk free are government securities, not because governments are better run than corporations, but because they control the printing of currency. At least in nominal terms, they should be able to fulfill their promises. Even this assumption, straightforward though it might seem, does not always hold up, especially when governments refuse to honor claims made by previous regimes and when they borrow in currencies other than their own.

So this is important: No default risk !!! So it is wrong for instance to use current yields of Italian Govies for valueing Italian stocks, as considerable default risk is embedded in current spreads. The “country” risk could/should be embedded into the equity risk premium, not into the risk free rate. A hypothetical Italian company with 100% of its business in Germany for example, should only get a very small country risk charge if any.

A second point is the following:

There is a second condition that riskless securities need to fulfill that is often forgotten. For an investment to have an actual return equal to its expected return, there can be no reinvestment risk.

In theory, one should discount annual cash flows with the respective annual risk free rates. With a flat yield curve, this is not so important but for steep yield curves the differences can be significant. However in practice Damodaran recommends using the duration of the cash flows of the analysed investment as proxy for the risk free rate. As the best proxy if we don’t want to do this, he recommends the 10 year rate.

For the EUR, he recommends specifically the following:

With regards to currencies he says this:

Summarizing, the risk free rate used to come up with expected returns should be measured consistently with the cash flows are measured. Thus, if cash flows are estimated in nominal US dollar terms, the risk free rate will be the US Treasury bond rate. This will remain the case, whether the company being analyzed is a Brazilian, Indian or Russian company. While this may seem illogical, given the higher risk in these countries, the riskfree rate is not the vehicle for conveying concerns about this risk. This also implies that it is not where a project or firm is domiciled that determines the choice of a risk free rate, but the currency in which the cash flows on the project or firm are estimated.

The most common mistake with currencies is usually to use current exchange rates for future cashflows which then results in a preference for projects in countires wiht high nomnal rates.

About Inflation, he is not really clear in my opinion. He argues basically, inflation does not matter because we get the same result if we use yields of inlfation linked bonds combined with inflation adjusted growth rates.

Especially the current situation, where we see negative real yields in many markets, one could argue about his appoach. A negative real yield means for an investor, that the “risk free” nominal asset would have a guaranteed loss in real purchasing power over the investement horizon.

Consider for instance the UK: 10 year gilts run at 2.158% yield, this would be the proxy for the risk free rate. Current inflation runs at 5%, UK 10 year implied inflation from inflation linked bonds is around 3%.

So if I would use the 10 year gilt as proxy as the risk free rate, I woul dalready accept a loss of -1% p.a. in real terms p.a. or almost -3% p.a. based on current inflation rates.

I think this topic might justify even a doctorate thesis, but in my opinion, one could go the following pragamatic way:

So in the case of the risk free rate for an Italian company I would compare:

I would the use the higher of the two rates, 3.4 %. This would be a pragmatic way to avoid unnecessary country risk premium and still make sure, the risk free rate does not imply a guaranteed loss in real terms.

The competitive adavantage of part-time investing

The new semester in Damodaran’s valuation class starts on January 30th, don’t miss it. Will this be the slow death of universities ?

Very good post from Wexboy about catalysts and activist investors

So, what’s the big deal with voting rights? Voting rights matter because they allow stockholders to have a say in who runs the company and how it is run. It is true that most stockholders don’t use these rights and prefer to vote with their feet, but the voting power does come into use, especially at badly managed companies, where a challenge is mounted on management either from within (activist stockholders) or from without (hostile acquisitions).

Generally speaking, voting shares should trade at a premium over non-voting shares, but that premium should be larger in poorly managed firms than in well-managed firms.

a. The difference between voting and non-voting shares should go to zero if there is no chance of changing management/control.

d. Other things remaining equal, the greater the percentage of voting shares that are available for trading by the general public (float), the higher the premium on voting
shares should be.

They also found extended periods where the voting share premium disappeared or voting shares traded at a discount to non-voting shares, a surprising finding that can be explained partially by the relative illiquidity of voting shares (since only a small percentage is available for public trading). The small premium commanded by voting shares was confirmed by Zingales in a study in 1995.55 Studies in recent years have expanded the analysis of voting share premiums to other markets, where differential voting rights are more common.

Premiums of a magnitude similar to those found in the United States (5-10%) were found in the United Kingdom and Canada. Much larger premiums are reported in Latin America (50-100%), Israel (75%) and Italy (80%). In a comparative study of voting premiums across 661 companies in 18 countries, Nenova (2000) concludes that the legal environment was the key factor in explaining differencesacross countries and that the voting premium is smaller in countries with better legal protection for minority and non-voting stockholders and larger for countries without such protection.